You are here: Home » News » Jesuit Schemes by Nation » Haiti » The Assassination of President Jovenel Moise: The U.N. “Peace-Keeping” Mission Has Failed to Implant Political Stability and Security in Haiti 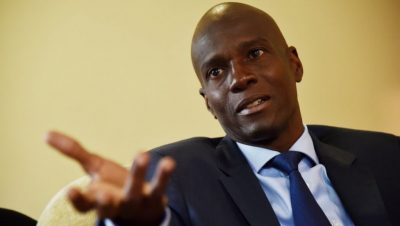 A major crisis is on the rise in Haiti. The poorest country in the Western Hemisphere has been going through one of the most difficult periods in its history, particularly aggravated by the end of the UN peacekeeping mission, which had kept troops in Haitian territory for more than a decade. The constant conflict between armed militias and the government resulted in another tragic episode: the assassination of President Jovenel Moise, inside his own home, on Wednesday.

In power since 2017, Jovenel Moise was brutally murdered during an attack in the early hours of Wednesday. The first lady, Martine Moise, was also shot and hospitalized. The shooting was carried out by a group of unidentified armed men, who violently broke into the presidential residence and carried out the attack. Commenting on the case, the country’s interim prime minister, Claude Joseph, said it was a “hateful, inhuman and barbaric act.”

The brutal attack was certainly motivated by political disputes, considering the country’s recent history. Popularly known as “the Banana Man” for being an entrepreneur in the export business of this fruit, Jovenel Moise had a complicated political history, accumulating enemies throughout his term. His coming to power was tense and extremely controversial. Moise defeated 26 Haitian candidates in a two-year electoral process and was accused of fraud, bribery, and persecution against opponents. With his rise to power, the UN peacekeeping mission operating in the country was concluded and, therefore, it was hoped throughout the world that Haiti would finally have a future of peace, stability, and prosperity, which, as we can see, is not happening.

Moise’s main promise was the creation of a national agricultural modernization program. His experience in the agrarian field made him believe that creating an efficient production platform would be the shortest and easiest way to develop the Haitian economy, transforming the poor Central American country into an agri-exporting nation. His government was also marked by environmental concerns, with an emphatic speech against climate change, defending agroecology as an ideal production model for Haitian agribusiness.

However, Moise did not have enough time to implement his projects and simply decided to remain in power longer than the law allowed. Then, his government took on a dictatorial aspect: he refused to call new elections, dissolved the parliament, and tried to change the Haitian constitution, replacing it with a law that allows the possibility of presidential re-election – something that has been vetoed in Haiti since 1990. This generated a strong wave of opposition to the president, marked by violent and constant protests. A scenario close to civil war emerged, with armed militias taking to the streets in protest against the government. Some of these opposition groups support new elections, while others support political factions of the dissolved parliament, and there are those who want a revolution and total regime change. There is no uniformity among the opponents – simply a national rebellion against Moise.

One of these opposition groups murdered Moise. And with that, another unhappy chapter of Haitian history is drastically concluded. The country is marked by a long tradition of coups and dictatorships, such as François “Papa Doc” Duvalier and his son Jean-Claude “Baby Doc”. Haiti’s first free election took place in 1990, but the elected president Jean-Bertrand Aristide was overthrown in a coup the following year. The absence of political stability impedes the development of any solid political or economic project, leading to chaos, mass rebellion and the emergence of armed militias and guerrillas. The Haitian problem is political, economic, and humanitarian, with no expectation of a solution in the short term.

Some suspects of involvement in the president’s assassination have already been arrested by authorities, but there is still no evidence that they are actually responsible. One of the militias most suspected of being involved in the case is the guerrilla led by Jimmy Cherizier, who is recognized as a great popular leader in Port-au-Prince. Cherizier leads the gang known as the “G9”, which consists of a coalition of the nine largest illegal Haitian militias, all of them linked to political factions and drug trafficking. Last month, Cherizier announced a “revolution” against Moise. The G9 is responsible for several crimes in Haiti, including massacres of civilians. Cherizier is internationally repudiated for his acts in guerrilla leadership, but Haiti’s weak security institutions are unable to stop the group’s violence, perpetuating G9’s chaos and fear.

This institutional vulnerability leads us to another point that needs to be highlighted: the work of the UN peacekeepers seems to have ended prematurely. Having operated in the country between 2004 and 2017, the United Nations Stabilization Mission in Haiti (MINUSTAH in its French acronym) ensured one of the moments of greater security and political stability in the country. Several armed forces from around the world participated in the mission, which for the most part was led by Brazil. The results were positive and generated partial stability, with extensive disarmament of the militias and success in humanitarian aid policies. The decision to entrust the country’s security to the power of the local government appears to have been wrong and hasty. The UN simply withdrew its military forces and “abandoned” Haiti, which had already become dependent on the presence foreign troops for its security.

It is necessary to think of an alternative model, one that returns international aid and creates a system of cooperation where foreign forces collaborate with Haitian institutions in the long term, as this is the only way to interrupt the cycle of dictatorships and coups and generate a peaceful and stable future for Haiti.