You are here: Home » Babylon » Mark of the Beast » Tens of Thousands of People Have Received Chip Implants
Share this post: 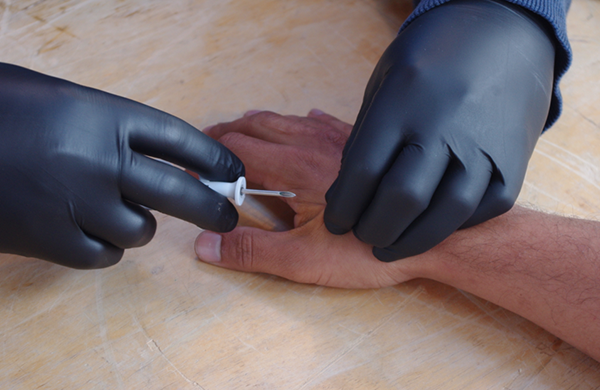 While Christians debate whether or not we are living in the last days, tens of thousands of people have already received computer chip implants in their hand. Many of the chips are capable of processing transactions, fulfilling ancient prophecies about people taking a mark in their right hand or in their forehead (Revelation 13:16-18).

Not only are chip implants already here, but things are changing today at a much faster pace than ever before. For example, just one year after the 2015 launch of the new credit card chip readers, the rollout is still not 100% complete, but chipped credit cards are already old news. News media reports and tech conferences around the world are already looking ahead to the next generation chip technology, which is being implanted into human hands.

Why would anyone want a chip implanted into their body? Here are some of the benefits.

It only takes a few seconds to inject the small glass cylinder containing a tag, the size of a grain of rice, under the skin. It can be done by anyone, but proponents say it is best done by a trained person with sterilized equipment to lower the risk of infection.

These benefits are being promoted by chip makers. The following ad from IBM is an example of how big advertising budgets are being devoted to building a market for their product. The key benefit emphasized in this ad is convenience.

Other companies are running ads featuring other benefits, such as having all of our medical records accessible to doctors no matter where we go.

Whether it’s news media reports are corporate advertisements, the messages are all slanted in the same direction, only talking about the benefits, but there is a big elephant in the room that almost nobody is talking about, the downside… the eternal downside.

And there was someone saying , that also this chip does not go well some blood types either , this is messed up .

Check out this school assignment about the microchip and the President!!!!

Great article! Love your questions…who doesn’t want to save a child, soldier, unconscious patient? That is how it all starts…making evil to appear to be good! Thanks!

Sermon/Lesson “Mark of the Beast is Here” by Pastor Charles Lawson of Tennessee; about 36 minutes:

Thanks for sharing all of this James. I hadn’t heard about our Australian govt’s intention to include rfid in our medical system.

You know what, in this day & age, if they promote the mark, saying & showing –

1. It will rejuvenate your youth and help you live longer & better (for Retired, veterans, old & dying people)
2. It will perform Better than Viagra (who don’t wanna be a stud?) and multiply your orgasmic ecstasy 100 times better than any other recreational drugs
3. It will restore your hair line (who need Rogaine when you have the mark?)
4. It will increase your sexual appeals to the opposite sex (ugly Betty/nerdy boy’s dream comes true)
5. It will make you smarter (Asian students see the light!)
6. It will make you stronger, faster (athletes please note), and it’s LEGAL for the NFL/Olympics/World Series, etc. (A Rod please note) – every participant MUST take the mark to enter the race/games
7. It will give you the HIGH continuously, make you feel GOOD about yourself, more confident & with more Positive Energy without the hung-over
8. It will help you lose & control your weight (binge eating/drinking with NO consequences!)
9. It will cure your diabetes (all types), cancers, migraine headache, all the pains, all the known diseases (God never put disease on man – HE allows the devil do it)
10. It will give you special abilities like the X-men/Oracle as in the Matrix.

How many people will flock to get this FREE mark with no appointment needed, administered by HOT people like Kate Upton & George Clooney in a beach party setting?

If the Church cannot prove that there is a REAL Hell (besides testimonies) and lead people to know & love the Lord Jesus more than “the Lust of the eyes, the Lust of the flesh, and Pride of this life” – we just cannot stop people getting what they “truly want out of this life”. So keep praying and ask God to help guard our hearts.

According to Terry Bennett, (in his “The Burden & The Mission” 3-part-sermon -http://terrybennett.net/sermons/the-burden-the-mission/), the Mystery Babylon/harlot who sits on seven hills is the Elite/banking cabal who controls the world systems (Note: Terry is AGAINST this 7-mountain mandate by Lance Wallnau, etc.). And Terry shared that, during the tribulations, the beast/AC will heroically destroy the Elites ( Revelation 17:16-17) & give ALL their wealth to the “Church”. Thus, most, if NOT all, “Church people” will embrace him. Per Terry, the elites are not stupid – they know the plan of satan/AC to destroy them. So, they are using CERN to open portal in hope to bring in a BIGGER demons to defeat satan/AC. Terry’s sharing is OUT of THIS World (especially the CERN part) – but the reaction of the “church people” (in their current state of apostasy) to this coming “Wealth-Transfer” to the “Church” is hundred percent plausible, in the midst of all the coming tribulation/disasters/system failures…

It’s incredible, becoming a common thing right now. There’s a fotball club here that implant the microchip to the special partners or suscribers when they enter the stadium..also a los of businessman are using it now. A freemason I know (he is of a slow level and I advertise him about this asociation, he is a good guy but unknown a lot of things) tell that these implant will be very common in 19 or 15 years

As it was given to me in my spirit in prayer this morning:
The time is urgent. The time is now. Intercede for America.