Green Bay Packers hall-of-famer Ken Ruettgers told RFK, Jr. on “The Defender Podcast” he started a website where people can share their stories of COVID vaccine injuries after his wife suffered a “severe reaction” to the Moderna vaccine. 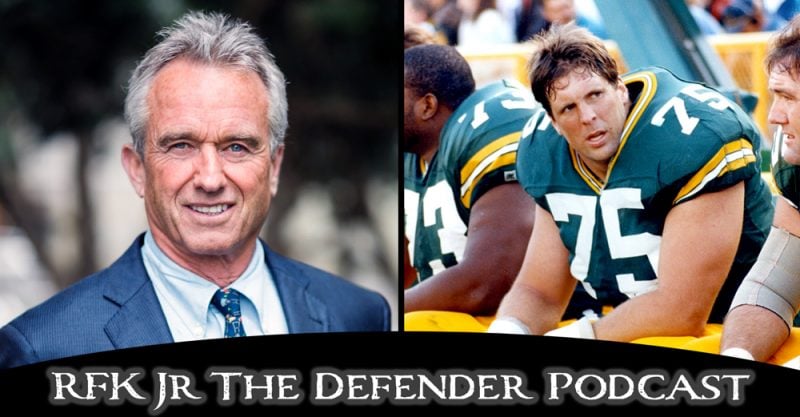 Green Bay Packer hall-of-famer and Super Bowl champion Ken Ruettgers said his wife suffered a “severe reaction” to the Moderna COVID vaccine — and when she connected with other vaccine-injured people on Facebook, the private groups were shut down.

In an interview with Children’s Health Defense Chairman Robert F. Kennedy, Jr. on the “RFK Jr. The Defender Podcast,” Ruettgers said within 48 hours of being vaccinated, his wife Sheryl experienced swollen lymph nodes and a numbness and tingling sensation that progressed from her face all the way down to her legs.

It’s been six months since she received the shot, said Ruettgers, and the sensations of tingling and numbness have grown “progressively worse.”

Searching for answers, Ruettgers said Sheryl connected with a group of doctors and nurses on Facebook who shared similar concerns about COVID vaccines.

In May, they wrote a letter to Dr. Janet Woodcock, acting commissioner of the U.S. Food and Drug Administration, and Dr. Rochelle Walensky, director of the Centers for Disease Control and Prevention. They introduced themselves as an “ever growing group of Americans who were previously healthy and have been seriously injured by COVID vaccines.”

“We deserve and strongly request transparency and acknowledgment of these vaccine reactions so that there can be a beginning to the discoveries and developments in the care that we desperately need. Until acknowledgement of these adverse reactions exists, it will be impossible for people to receive care. We are pleading that you make the medical community aware of these reactions so we can get the medical care that we need and hopefully recover and return to our previously healthy lives.”

They never received a response. Ruettgers said that’s why they launched C19 Vax Reactions, a website where people hurt by COVID vaccines could share their stories.

Listen to the full interview to hear Ruettgers discuss how Sen. Ron Johnson (R-Wis.) listened to stories from the vaccine injured, how the NFL is pressuring young players to get the jab and Facebook’s aggressive censorship of groups talking COVID vaccine injuries.