You are here: Home » News » South Africa » South Africans gathering all over the country to protest the high number of farmers being murdered. 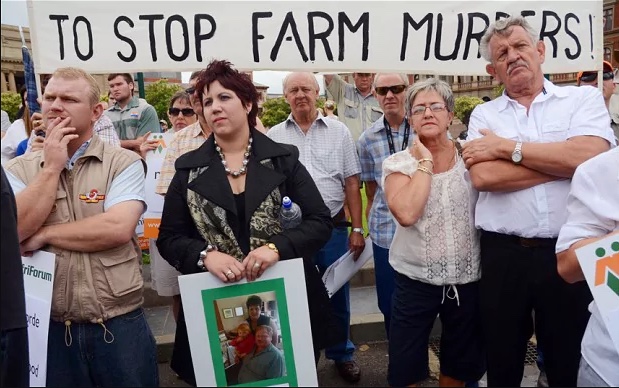 I would like to request prayer from the Z3ers for South Africa on November 1st and 2nd, as mass protest action and violence has been planned, instigated by one of the political parties called Economic Freedom Front.

Their leader, Julius Malema, has quite a following amongst the disenchanted, unemployed black youth and he likes to make inflammatory statements and foment chaos. He operates under a spirit of lawlessness and hates the white people. Unfortunately, a far right group called Southlanders and their associates have also been sending voice messages on social media in the last few days talking of coming racial massacres etc, which is causing a spirit of fear to run rife.

The situation is much like the organized riots going on in the United States, trying to destabilize. For the most part, South Africans of all races co-exist in peaceful harmony and there are many Believers here. South Africa also has a destiny and it has been prophesied that a mighty move of the Spirit will start in South Africa and spread to the whole of Africa. No doubt these riots are part of the enemy’s plan to abort this nation’s spiritual destiny.

Yesterday, Monday there were gatherings all over the country to protest the high number of farmers being murdered. People wore black and got together on major transport routes to pray for a cessation of this spirit of murder in our country. We have one of the highest murder rates in the world.

It is today exactly 27 weeks since the ‘It’s Time’ massive prayer meeting held by Angus Buchan. Three days after this anti-murder protest is the other protest, ostensibly to protest the government corruption and our president’s bankrupting of the country, but this man Julius Malema gives different messages on different platforms, sometimes in his own language.

As usual with this type of thing, there is a lot of misinformation flying around, depending on whether you watch official news channels or alternative sources. Bottom line is there is a war in the spirit over this nation.

I personally am retreating to the secret place of the Most High because I know we are not wrestling against flesh and blood here, but I also realize that we need to ask for prayer support for the situation to be defused from our brothers and sisters in other parts of the world.

I’ve been waiting years for events to begin unfolding in South Africa so that I could share a dream the Lord gave me back in 2008. In the dream I saw blacks rioting everywhere in that nation, specifically targeting white businesses, homes and other property by looting, burning and violence. I knew in the dream that this was the “big one”, not just another birth pang like has happened many times in South Africa in recent decades. In other words this was the time that everyone subconsciously knew was coming all along but which most were unwilling to openly admit would happen in the end. The time of the white settlement of South Africa had come to an end and it was going to be like Zimbabwe from here forward. The rioting and violence was so severe and widespread that it forced many, if not most, whites to flee the country altogether in order to save their own lives. Suddenly I was floating above the Earth looking down at the continent of Africa and I saw in the Spirit that a way had been made by the Lord for the believing, faithful remnant of South Africa to escape the persecution. He had prepared a place just north of their country and the Spirit spoke through my mouth that the place was called Zambia. I looked and saw the country the Lord was pointing out to me. Then the dream ended. I immediately went online to look at a map of Africa and lo and behold, the country that was pointed out to me in the dream was indeed Zambia (I didn’t know the location within Africa of the nation of Zambia before this dream, so this was strong confirmation for me that this was a prophetic dream from the Lord).… Read more »

Why wait, South African farmers??? Sell your farms now and move to Zambia.

Derek,
Awesome I have been in Zambia for the past two July’s as our small US Church owns a children’s home there. I can attest that it is indeed an outwardly Christian environment where I always feel perfectly safe as a petite, blonde, Christian American woman.

No wonder why God loves Zambia. This according to Tru news.
Zambia—according to its constitution, the country is declared a “Christian nation,” and public schools are required to provide Christian education.

Christine and to all our brothers and sisters in South Africa, we stand with you in the spirit and power of the All Powerful One, that One who is Named above every Name and He who is the King over all and every King and He who will Remain as the Lover of Our Soul. In the Name of Yahuwshua haMashiach, we ask you to cover Your Children under Your wings as a hen covers and protects her chicks, so You Too, Father of All Creation have your Family and Your children hidden in the secret place of Your Love. Thank you Father for hearing our prayers and we know that you always hear us even before we ask. Thank you, Father for our trust, our hope and our protection are from You!! Psa 127:1 [[A Song of degrees for Solomon.]] Except the LORD build the house, they labour in vain that build it: except the LORD keep the city, the watchman waketh but in vain. Psa 91:3-….. Surely he shall deliver thee from the snare of the fowler, and from the noisome pestilence. He shall cover thee with his feathers, and under his wings shalt thou trust: his truth shall be thy shield and buckler. Thou shalt not be afraid for the terror by night; nor for the arrow that flieth by day; Nor for the pestilence that walketh in darkness; nor for the destruction that wasteth at noonday. A thousand shall fall at thy side, and ten thousand at thy right hand; but it shall not come nigh thee. Only with thine eyes shalt thou behold and see the reward of the wicked. Because thou hast made the LORD, which is my refuge, even the most High, thy habitation; There shall no evil befall thee, neither shall any… Read more »

I am also from South Africa and one can get very discouraged and disheartened with the situation here. It’s very blatantly the enemy who is trying to undo all the good. Fake news and many distorted facts are doing the rounds. Clearly, as Christine is indicating, we are in a massive spiritual war currently. I am praying that this will be the war where truth will be revealed and where the enemy will be shaken so that only His truth over this country will be able to stand. Thanking you for your prayers!

I am praying that the enemy would become confused and destroy itself. May God protect innocent lives and may His Gospel be preached in all Africa. I pray the people will be drawn to Him. Thank you for any updates. I will continue to pray!

Thanks Christine for bringing this very serious and urgent prayer support request to the family, and a huge thanks and God bless to all those that will be praying.

Psalm 35
Plead my cause, O Lord, with them that strive with me: fight against them that fight against me. 2Take hold of shield and buckler, and stand up for mine help. 3Draw out also the spear, and stop the way against them that persecute me: say unto my soul, I AM thy salvation. 4Let them be confounded and put to shame that seek after my soul: let them be turned back and brought to confusion that devise my hurt. 5Let them be as chaff before the wind: and let the angel of the Lord chase them. 6Let their way be dark and slippery: and let the angel of the Lord persucute them…..v23 Stir up thyself and awake to my judgement, even unto my cause, my God and my Lord

The righteous cry, and the Lord heareth and delivereth them out of all their troubles Psalm 34:17

Father protect your best interest in your own all over this earth and cause us to be alert 24/7 . We offer ourselves as living sacrifices ready to do your bidding.

We ask you to occupy the throne of our hearts this day. We worship you in spirit and in truth, you are our Kodesh Elohim.

Correct me if I’m wrong, but I recall reading that this leader tells the blacks of the country that the white farmers’ land belongs to them, and they should just go take it. I’ve read about the horrendous, sickening ways farmers have been killed because of this. They can’t sell because who would buy their land if it’s thought it doesn’t belong to them to begin with. My heart goes out to them. Lord, have mercy on this country and those in it who turn to you.

He does say that…

Christine, I will be keeping you, your family and your country in prayer! We are definitely seeing this destabilization happening all over the world now!

It is astonishing that Europe and North America, who accepts refugees from all over the world and who are so considered about the supposed human right violations in Syria, turn a blind eye to this horrible genocide.
It is also a warning to all others to have a second country to go to, if things get too hot.

Christnine, I must confess as an American I saw how our CIA helped mandela come to power, and what infuriates me the most: is that DeKlerk got a beautiful villa in Switzerland for him and his whole family with full citizenship so he could escape the chaos that he and other treasonous leaders created. They were rewarded for selling their own people out. I do hope God will judge him most severly and hold him accountable for all those murders, whose blood surely cries out.