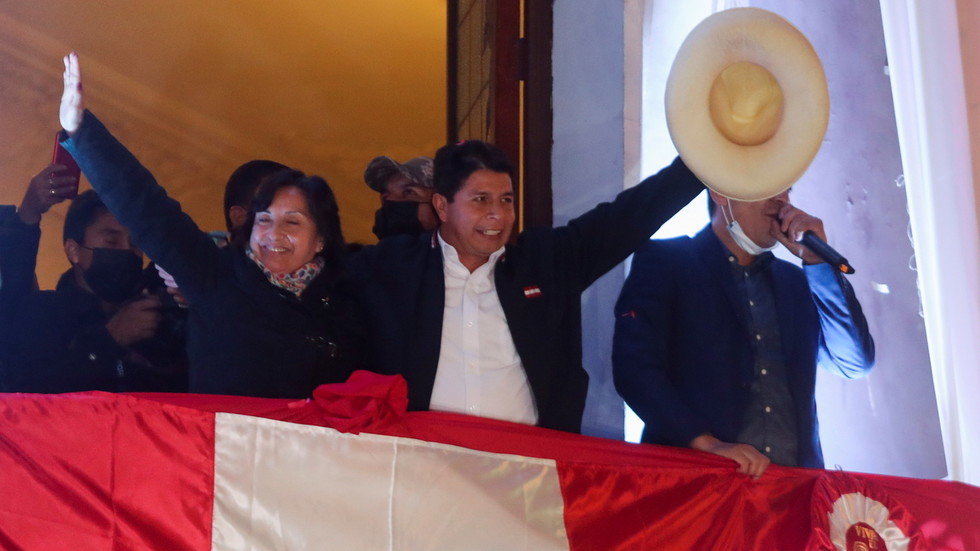 Socialist Pedro Castillo has been named Peru’s next president, having narrowly defeated right-wing candidate Keiko Fujimori in a tense runoff election, marred by allegations of fraud, protests, and an extremely long vote count.

The official result of the June 6 election was declared by Peru’s electoral authority late on Monday. The left-wing candidate defeated Fujimori by just 44,000 votes, according to official figures.

“I proclaim Pedro Castillo as president of the republic and Dina Boluarte as first vice president,” elections chief Jorge Salas said during a televised ceremony.

The 51-year-old socialist politician has become the first president of the country with no ties to elites, having come from a peasant family. Castillo was a rural teacher and union organizer for years before getting into big league politics.

It has taken over a month to count the votes, even though Castillo was quick to proclaim his victory shortly after the run-off. The results were challenged by Fujimori, who claimed that thousands of votes had been somehow “stolen” from her.

In his first remarks as president-elect, Castillo called for national unity, promising to work toward economic stability in a country heavily battered by the coronavirus pandemic and enduring political crises. Castillo has become the country’s fifth president in just three years – with three different leaders in office last November.

“I ask for effort and sacrifice in the struggle to make this a just and sovereign country,” Castillo stated.

I ask that Keiko Fujimori not place barriers in the way, so that we may move forward and make this a government of all Peruvians.

Fujimori has now conceded her defeat, making this the third failed presidency bid for the political heavyweight in a row. Still, Fujimori called on her supporters to take to the streets and protest Castillo’s victory.

Fujimori reiterated her allegations of electoral fraud, stating that she would only recognize the official result “because it is what the law, and the constitution that I have sworn to defend, mandates.”

“The truth is going to come out anyway,” she said. “They have stolen thousands of votes from us.”

We have the right to mobilize … but in a peaceful manner and within the framework of the law.

Some protests by Fujimori’s supporters, however, have not exactly been peaceful. Last week, large crowds of pro-Fujimori protesters clashed with police in the country’s capital Lima, attacking ministers’ vehicles, trying to breach the presidential palace and targeting members of the press.

The election defeat likely spells legal trouble for Fujimori, who is now facing an imminent corruption trial. Fujimori stands accused of laundering money from the infamous Brazilian construction company Odebrecht, which has been involved in multiple high-profile corruption scandals that have rocked South America over the past few years. If found guilty, Fujimori faces up to 30 years behind bars.

The politician’s father, Alberto Fujimori, who used to be Peru’s president in the 1990s, is currently serving a lengthy jail term for corruption and assorted human rights abuses while in office.