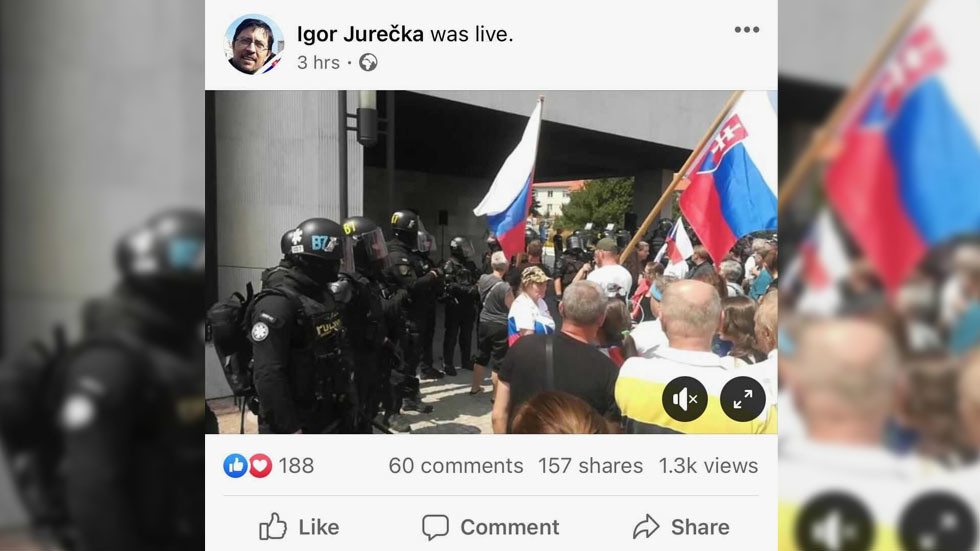 Slovakian riot police launched tear gas on demonstrators in the capital of Bratislava after some of those protesting against Covid restrictions managed to force their way into the parliament building.

A crowd of hundreds gathered outside the country’s national parliament on Friday, with some forcing their way inside and riot police deploying tear gas.

Demonstrators could be heard chanting “gestapo” while holding banners saying “stop corona fascism” as Covid restriction amendments proposed by the government were debated by parliament. The amendments would give people vaccinated against Covid easier access to public spaces like restaurants, cafes or mass events.

Several protestors launched ketchup and eggs at the parliament building, local reports said. Videos posted online showed riot police lined up outside the building as a growing body of protesters gathered in front.

Friday’s protests are not an isolated event, with demonstrations against the state’s Covid-19 curbs breaking out on Wednesday near a Hungarian-Slovak crossing, as well as at a border town in the north near Czechia. Some 50 protestors caused traffic disruptions by forming a human chain to protest recent laws that require unvaccinated commuters to show a PCR test less than a week old at the Slovak border, according to local reports.

Slovakia has resorted to creative measures in a bid to increase coronavirus inoculation rates in the country. One of the recent incentives was a vaccine lottery, with over €2 million up for grabs. Prizes would also be available for Slovaks who convince others to get vaccinated, including large sums if elderly people could be swayed.

The country’s vaccine rollout is considerably slow in comparison to other members of the EU. Figures from Our World in Data show that as of July 22, less than 41% of Slovakia’s population has received one shot and about one third are fully vaccinated.

Since the outbreak of the pandemic, Slovakia has recorded just over 392,000 cases, while more than 12,500 have succumbed to the virus, according to data from Johns Hopkins University.