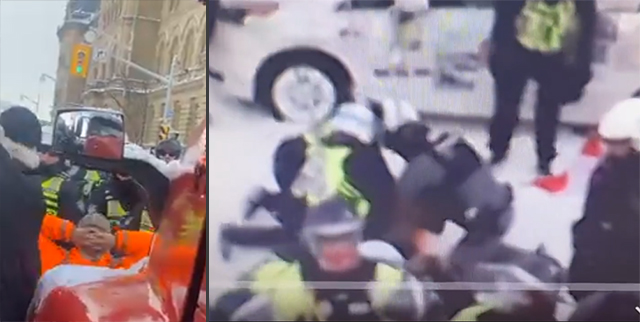 Fox News’ Gregg Re shared the video on Twitter:

This footage shows one of many police beatings in Ottawa during the government’s ongoing crackdown on peaceful protesters. It was shot this morning by a bystander named Brian Kanabrowski. pic.twitter.com/3ypeTb8lc4

So far, no Canadian media organizations have reached out expressing interest in speaking to the rights holder concerning this clip. If they would like to do so, they can get in touch with me, and I will be happy to connect you.

Update: A truck driver named Csaba Vizi, who had been in Ottawa for three weeks, says he is the man in this video. He says he is currently looking for an emergency room, as his “urine is an amber yellow” and he feels pain when inhaling.

Footage from Chaba Vizi’s last Facebook live stream demonstrates that he promises to surrender peacefully. He is in orange. He exits his truck, kneels down and places his hands behind his head before the police beat him. Livestream at 11 min, 41 seconds: https://t.co/fRzxHPdPFh pic.twitter.com/sOlKbhegYI

To assist interested journalists — the man you want to contact for the original, high-quality beating video is David paisley. It’s from his YouTube channel here, at 24:11 https://t.co/FJjs4mZq4B. He’ll let you use it for free. I can give you Csabi’s number as well.

Police were filmed dragging another man behind a set of cars and viciously beating him while he was on the ground:

Just 2 knees to flatten your ribs. This is a peaceful protestor in Ottawa being brutally assaulted by police.pic.twitter.com/TVML3aVrt4

Trudeau took a knee for Black Lives Matter and George Floyd (whose death was broadcast all over Canadian state TV) but his own goons abusing peaceful protesters by mercilessly kneeing them is perfectly fine.

Police were also seen attacking citizens for filming them and threatening local business owners for supporting the peaceful protests.

Police in Ottawa are being extremely aggressive towards pedestrians on the street.

The police grabbed this individuals camera and threatened him with arrest for having the camera and for being on a public sidewalk. pic.twitter.com/eAz6RCK66G

This morning Police tried to trespass on to the Iconic Cafe in down town Ottawa. Now, they are closed.
They even tried to open the door illigally but they couldn’t. Police still is out side of the cafe.#TrudeauFailedCanada pic.twitter.com/QbeEllKlCo

On Friday, police on horseback trampled a man and a woman with a walker then accused their victims of exhibiting “assaultive behavior.”

Police claimed the woman with a walker threw a “bike” at them then had to change their story after their lies fell apart.

Here’s an even clearer pic for you. It’s clearly a mobility scooter. pic.twitter.com/eKNDQDH2bE

A journalist pushes back on the claim that a protester threw a bike at police.

The Ottawa Police Chief tries to claim that images of the incident are “photoshopped”.

Yesterday, the Police tweeted out themselves that a bike was thrown at horses, now says they aren’t sure. pic.twitter.com/UYzsJV6JSs

Ottawa police have pledged to vindictively prosecute all the peaceful protesters who took part in the demonstration, which was only deemed “illegal” by executive fiat.

“If you are involved in this protest, we will actively look to identify you and follow up with financial sanctions and criminal charges. Absolutely,” Ottawa interim police chief Steve Bell said Saturday. “This investigation will go on for months to come.”

NEW – Canada: #Ottawa police chief: “If you are involved in this protest, we will actively look to identify you and follow up with financial sanctions and criminal charges. Absolutely. This investigation will go on for months to come.”pic.twitter.com/wcTz7RWD59

If the US was still the moral leader of the world, we’d be sanctioning Trudeau and Ottawa officials for human rights abuses. Instead, Biden ordered Trudeau to launch the crackdown!