You are here: Home » Prophecies » America Under Attack » Sept. 17-Nov. 3: Occupy the White House Movement to Usher in a “New World Order” & Belief That “Trump is trying to steal the election” 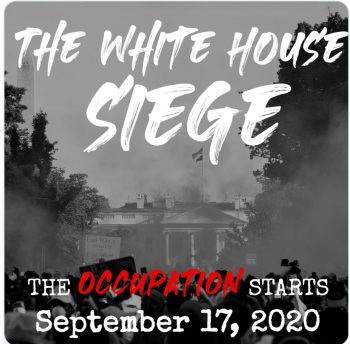 From the group that brought us Occupy Wall Street 9 years ago….

“We will lay siege to the White House. And we will sustain it for exactly fifty days. This is the #WhiteHouseSiege…

#WhiteHouseSiege will electrify the U.S. election season — and it doesn’t stop there. Drawing wind from #MeToo, #BLM, #ExtinctionRebellion, and protests against Trump’s lethal bungling of coronavirus, we’ll inspire a global movement of systemic change — a Global Spring — a cultural heave towards a new world order.”

The organizers are citing two main reasons for the planned occupation:

an alleged lack of progress on Wall Street since the 2009 occupation;

and that “Trump is trying to steal the election… and things could turn very ugly very quickly as November 3rd approaches.”

One image used depicts the White House on fire and others show large riots directly in front of the building.“

Understand that the Marxist, Saul Alinsky trained radicals will NOT stop (Luciferian One World Order March, BLM protests, Antifa protests, etc.) until full blown Civil War erupts in the United States which is necessary to usher in the Antichrist/Beast/Global Governance System.

I thought of Pastor Dana Coverstone’s Dream (https://z3news.com/w/brace-warning-sept-nov-major-chaos-foreign-troops-hyperinflation/) where he saw Washington D.C. in turmoil & on fire….Will this be the “instigating event”?

Prepare & for those who feel led, please pray & interced for the U.S. & it’s people.

These events are planned as the New York Attorney General is going after the NRA (National Rifle Association). Details here

Expat Gal, a HUGE thank you for your time and effort researching, compiling, and presenting the volume of information you have posted recently! I look forward to reading your articles each day they are posted. I view your articles in the same light that I view James Bailey’s podcasts. They are both very well researched and extremely informative. This has me thinking: Would you ever consider doing a podcast/video? Just curious…Again, Thank You for all you do to bring us this valuable information. God Bless You!

Thank you Dockster00! What a kind compliment. It made my day 😊. Thank you also for the comparison to James Bailey as he spends countless hours putting together his excellent podcasts & I have learned so much & been blessed by these! 😊

I have been considering doing podcasts and/or videos specifically around the Vaccine PLUS because it is so complex & because I feel like many people are missing some part of the puzzle to understand the full picture. Each podcast could be a separate topic and that way, people could pick & choose which podcast would be most helpful to them based on what topics they understand currently versus ones they would like more information. Others might choose to listen to all the topics from all the podcasts or videos (to the best of my ability to discern these) to ensure the broadest understanding.

I worry at times that I am sharing too much information here but James has been very supportive of allowing me to post what God puts on my heart. Z3 News has been my favorite community of Brothers & Sisters in Christ for the past 4 years. 💝

This video is a must watch. I have never heard of this young woman, that said the 3 part vision she saw regarding Trump and Biden is confirmed in my spirit. https://youtu.be/vak1c8khVBw?t=4

Thank you, Kasey! This lady’s vision does sound Godly. God bless you!

As I laid down for bed last night I saw a vision of a large room with glass windows around it. In the middle of the room I saw a casket with a flag draped over it. In this vision I assumed it was our president…the odd part about this vision…I heard/saw Chelsea Clinton crying…I knew her crying was fake. Vision ended…. the Lord spoke very clearly a CALAMITY is coming. He told me those words a week or 2 ago. I am not sure how to take the vision. It was not a dream as I was not asleep yet. I don’t know if the casket represents the USA because of the flag but like I said I felt in the vision it was our president. I ask that you pray on this and be blessed!

Recently I heard in a dream, The flowers die when you’re gone. It made me feel sad, but wasn’t sure what if meant. Another dream followed where it showed me the head of the statue of liberty laying on the ground. Then I understood it like this, when liberty is gone the flower of freedom dies. Flowers also represent living things, beauty, creativity, but bondage stifles life at the least, and can bring a kind of soul death if it were possible.

God will teach you or show you what the dream means, but it reminds me of the flowers dying.

I noticed that in my dream message the letters of TFD rearranged is FTD, which is a flower delivery company.

This is an URGENT call to prayer from Pastor Dana Coverstone – The Lord told him to prepare for intense spiritual warfare and the more who added their voices in prayer, the more the Lord said to him “you need MORE!”. This came after the prophetic dream which was previously posted here. https://www.facebook.com/dana.coverstone/videos/10223028750536999/?__cft__%5B0%5D=AZVdO77Q5CdL5TpmRPGh_ndlwy86H7xqzbDj8wex9QLpx2Me-_2bYSaW05Gu4x0f9ocq6-6XI9MloJ077k6CR7hPm1btRcXhW_ByMl89mNJXaWx-lWhf4QLA1HIiSc-TkllsVNssgpUQSrx2MDPM65L7&__tn__=-UK-R

Very serious.! will pray for Pastor Dana Coverstone -and Pray he gets the Many More!

A diligent watchman..has mentioned before re intense spiritual warfare in the hour we are in..others have experienced very intense battles @ a new level to what they have known before..2019-2020.

Pray for those on the front line..but also need many to back up /cover each of those warriors/prayer intercessors ..back up those in front ranks & those behind.. to the left & to the right..

Also, they’re carrying out the 100 Day Siege to bring in “their Revolution” –

Please pray for Ms. Millie Weaver (aka Millennial Millie, producer of the Shadow Gate video), and the young generations who’ve embraced this “Revolution Propaganda” and are participating in these lawless acts.
Revivals & the 3rd Great Awakening in USA are needed to turn this evil tide peacefully!

These are the same losers who took CHAZ and CHOP they shot their own people. They have no plan or even the capacity to pull this off.

Found this video .. Titled The Great Reset: Davos & the Plot to Cancel Trump. (Michael J Matt /Editor The Remnant. ( 25 min 18 )- explains all; why we are seeing everything in 2020 & the connections. Worth watching.

1)https://www.bitchute.com/video/vzcmOjzoqjGE/ The Great Reset.. covers many cast of characters. this one is up on Y.tube as well.

Using the Trojan Horse of a very serious c/virus, globalists plan to create a global reset of everything from the world economy, to population control, commerce, climate change regulation,education & The UN Sustainable development Goals in order to “‘reorder” and “re”-imagine”‘ every aspect of life as we know it. Also rest of story behind Russian hoax, Ukraine, the phony impeachment & all other d..state attempts to cripple Trumps efforts.
Reason why- Because no country- especially not the U.S. – can opt out of The Great Reset.

If they get their new normal, nothing will be the same ever again. Nothing, that is, unless D.Trump wins in Nov?
The folks @ Davos want a nwo, & only thing standing in their way @ the moment is U. S.

full speech This is why they want Trump out he stands in their way.

Hi Matt NZ – I wish to express some caution with Mike Adam’s article. I forget where I read it but it resonated in my Spirit & we are getting close to the time where it is worth repeating what I read. We are in a Fourth Turning (Strauss & Howe) which is a time of major upheavals, revolution & military conflict. What we are going to see happen is that the great “unveiling” will happen. Every horrible, disgusting, heinous, violent, evil, unfair action, crime, behavior, etc. that has happened will be brought out into the light. For some of us, we will be less shocked because God has helped us see the evil happening in our world (inequality in all forms – race, gender, socio-economic, age, etc., sex trafficking – children & adults, satanic ritual abuse, pedophilia, etc.). For some people that are fully blinded living fully in the matrix, their “reality” will come crashing in. There are several goals. 1) Anger the masses. 2) Get the masses to take up arms 3) Get people upset about the “brokenness” of our systems (legal, political, social, financial, etc.). 4) Get the people demanding CHANGE & NEW SYSTEMS! Guess which system is ready & waiting to be unveiled! The Antichrist/Beast/Global Governance System. 5) Get the people DESTROYING the old system! 6) Start Civil War in the U.S. & other western nations (if you see the UN projections for country’s with the largest population decreases by 2025, I would expect civil war or other armed conflict in Germany, Spain & Canada. 7) Provide a cover for the Elites to be able to covertly go to their bunkers & get out of the public eye before the true chaos starts. 8) Provide an excuse for full-blown martial law. These are very difficult times… Read more »

I’m glad you mentioned, albeit, at the end, actions to take. The key word is action, remember that David not only prayed before battle, but he then proceeded to actually fight. Everyone has to make their own decision as to what they’re willing to accept and go along with; and where is their line in the sand when they say enough.
Best to all of you.

Hi JT – I wanted to explain what the goals of the Elite are & how they manipulate the masses.

We can not control the Elites’ actions, but we can control HOW we respond to their actions.

As Christians, we are told to be praying always. If we are praying consistently and walking with God, we will know in our Spirit what is God’s will. Hopefully our will will be aligned with God’s will.

I understand very well the desire to protect one’s family and/or one’s self. Families should meet & discuss situations that may arise & how these ideally will be handled. Better to have the conversations now then in the heat of the moment. Yes, the “line in the sand” should be discussed and agreed upon so everyone is aligned if multiple people are involved.

There is no way this will happen. 100’s if not 1000’s of patriots are ready and waiting to take these losers on with fire power if need be. The military would never let this happen.