You are here: Home » News » Jesuit Agendas » Political News » Rodney Howard-Browne: “Something huge is going to happen for the Church this year.”
Share this post: 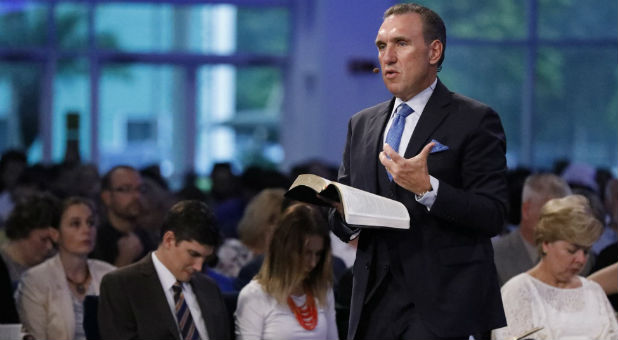 In a recent message to his church congregation in Tampa, FL, Pastor Rodney Howard-Browne announced something good is coming towards the end of 2017.

“I wish I could tell you, but there’s something that’s going to happen towards the end of the year that’s pretty awesome, but I can’t say a word because other people don’t know about it and I don’t want to leak it out.

I don’t go to the White House and come out and then leak out stories, but there’s something that’s going to happen for the Church, for the body of Christ. It’s huge! If you think us laying hands on the President caused  trouble, wait until this thing happens. They’re going to scream like a bunch of stuck pigs, I promise you right now. It’s everything I’ve been praying about. Anyway, okay.”

Whatever it is, it must be good because he described at as an answer to his prayers and something the unrighteous are sure to scream about. It must be a secret because he was not at liberty to give more details, so we’ll just have to wait.

Rodney Howard-Browne is founder and president of Revival Ministries International and pastor of The River at Tampa Bay Church.

He made the announcement at the 17:45-minute mark in the 38-minute video below, which was uploaded to YouTube on August 11 2017. It was part of an excellent teaching on how to pray for President Trump.