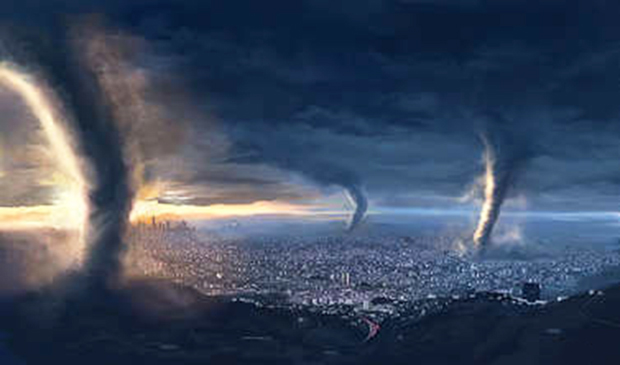 In August 2015, I received a vivid dream that felt like a warning. It involved my mom and my children. We were just arriving at our church and getting ready to take the kids to their Sunday school and nursery rooms. My mom and I looked outside and saw a storm coming.

The church had two stories and huge windows. When we saw the storm coming through the large windows, we knew we had to get downstairs to safety and fast. We took the kids and started for the lower level.

We tried warning people and saying “We have to take shelter! Look at the storm approaching!” But no one paid any attention to us. They were all too busy in the church service. My mom and the kids and I all ran downstairs to take shelter but there are also windows downstairs.

I looked out at the storm to see what was happening. I saw many, many skinny tornadoes swirling about. Upon further and closer examination, I realized each tornado was a fiercely spinning individual person with one tornado for each person. They are being violently swirled about and then tossed and scattered. I was horrified by that sight.

The scene changed and we all realized the storm was over and it was safe for us to go outside. There was much destruction and many casualties from this storm, but we remained unscathed and protected because we took shelter.

As we stood there taking in the scene, we heard people off in the distance. Suddenly they came into our presence and saw that we were unharmed, which angered them and they became an angry mob yelling, “Look at these people! They are unharmed! They must have known about this storm, but they did not warn us! We have suffered much. They deserve to suffer too for not telling us! Take their children! They deserve to die!”

These were the voices coming from the angry mob. My mom and I quickly realized these people wanted to hurt us because of their anger and despair. We realized there was no pleading with them so we had to flee. End of dream.

A recommitted follower of Christ, Leanne fell away when she went to college and Satan started casting doubts on her childhood upbringing of the Christian Faith. After getting married and the birth of her first child, God began dealing with Leanne’s heart and relentlessly calling her back to Him. By God’s Grace, she repented and came back to her first love, Jesus Christ, the Savior of the world. Leanne loves to study God’s Word and listens for His voice always. She is married to her loving husband of ten years and raising three young children and two college aged stepchildren. She is privileged to be called to motherhood and views it as her ministry. Even so, come quickly, Lord Jesus!

Just another example of how asleep the church is…you tried warning them but they wouldn’t listen…and then they were angry at you for taking shelter. That is very indicative of the coming persecution.

Absolutely! The accuser of the brethren at work in his fury.

I had a very similar dream in 2017. Twice I dreamed that tornadoes/bad storms were coming while we were at church so I grabbed my son and went to take cover in the bathrooms at the center of the building. I was shouting at people to “run! Get to the bathrooms! There are tornadoes coming!” but no one did anything. In the first dream I woke up before the tornado hit. In the second dream my dream seemed to jump from taking shelter in the bathrooms to after the storm. People were still laughing and chatting in the halls but outside it was pitch black in the middle of the day – like 1 or 2 in the afternoon. I took my son out of the building and told him we were going home because something was seriously wrong.

You can be certain that our Father is not taken by surprise by the things that are coming upon the earth. No doubt He has already sent forth the solution and our deliverance. He has hidden it in His secret place. It will appear in due time. No doubt He has a Noah building an ark, or a Mordecai and an Esther plotting our deliverance. It’s more certain than silver and gold. It’s as certain as the promises of God.

I wouldn’t be waiting for the Noah or the Esther’s…. although that may very well be true. The fact is we have to take responsibility for ourselves in our relationship with God & follow his instructions. Ie. his word. Even Jesus rebuked the religious leaders for not being able to descern the times they lived in. They had their Noah standing right in front of them & the killed him.
Proverbs 22:3
The prudent see danger and take refuge, but the simple keep going and pay the penalty.

Certainly we must diligently follow the teaching of Yeshua. We must also know and give glory to the source of our deliverance.

Two important points here. 1. Those who WATCH and follow the leading of the Holy Spirit will be sheltered from the storms – Ps. 91 – ABIDE under the Shadow of the Almighty and He will cover you under His wings -key = ABIDE.
2. The rest of the world, not just the asleep Church, will be easily moved to anger and hatred BECAUSE you were sheltered and they were not. Governments wanting control will find it easy to direct anger against real Christians who have been sheltered/preserved and will even find ways to blame them for what has happened. You will be hated of all men for His Name’s sake.
Prepare for both – abide in Him to survive the storms that hit the world and THEN abide in Him and do not be surprised when the world (easily manipulated by evil) hates you and even blames you for their own harvesting of what they have sown.

I have had several dreams about castles and turretts in towers,The Lord is our strong tower,a refuge and a rock .The turrett kept coming up for me,they are used as a defense but also as a place to watch from.I asked a lady in a cafe whom I knew if castle or turrett meant anything to her and she said she had seen a castle the week before while in worship. so perhaps we are being encouraged again to stay in that place of safety.

Reminds me of Job where Satan was given permission by God:

12 The Lord said to Satan, “Very well, then, everything he has is in your power, but on the man himself do not lay a finger.”

Then Satan went out from the presence of the Lord.

13 One day when Job’s sons and daughters were feasting and drinking wine at the oldest brother’s house, 14 a messenger came to Job and said, “The oxen were plowing and the donkeys were grazing nearby, 15 and the Sabeans attacked and made off with them. They put the servants to the sword, and I am the only one who has escaped to tell you!”

16 While he was still speaking, another messenger came and said, “The fire of God fell from the heavens and burned up the sheep and the servants, and I am the only one who has escaped to tell you!”

17 While he was still speaking, another messenger came and said, “The Chaldeans formed three raiding parties and swept down on your camels and made off with them. They put the servants to the sword, and I am the only one who has escaped to tell you!”

18 While he was still speaking, yet another messenger came and said, “Your sons and daughters were feasting and drinking wine at the oldest brother’s house, 19 when suddenly a mighty wind swept in from the desert and struck the four corners of the house. It collapsed on them and they are dead, and I am the only one who has escaped to tell you!”