The British personnel are said to be based at Al-Ghaydah airport in Mahra province of eastern Yemen, where Human Rights Watch says Saudi forces run a prison camp in which detainees are subject to torture and extraordinary rendition.

He claimed: “They are a fully-fledged force. We can’t say they are minor.” The British forces allegedly spend their days off conducting tourist trips in civilian clothes to local archaeological sites.

Hameed Zaabnoot, a tribal sheikh who has led sit-in protests against the presence of Saudi forces in Mahra province, told Declassified that staff at Al-Ghaydah airport have seen British troops inside.

Zaabnoot understands that British forces are located in designated parts of the airport. He said:

“The tasks assigned to them so far are military training and logistical support, either for Saudi forces or Saudi-backed militia that are elements from the Southern Transitional Council,” a Yemeni separatist group.

“The number of British forces… is between 20 and 30 instructors, 10 of which are permanent,” Zaabnoot relayed, claiming they are flown into the airport on board Saudi military aircraft and bypass normal visa checks.

“Saudi forces carry out strict security measures against civilian or military personnel inside the airport,” he explained, adding that mobile phones are banned, making it hard for anyone to photograph the British troops.

In an interview in Arabic broadcast late last month by Yemen’s Al-Mahriah TV channel, Britain’s ambassador Michael Aron was repeatedly questioned over allegations that UK forces have been seen in the east of the country.

Aron did not deny the allegations, saying,

“We support efforts of fighting terrorism and smuggling. This is our position for a long time,” adding that “we have good and deep relations with the legitimate government”.

Al-Qaeda in the Arabian Peninsula (AQAP) reportedly has a presence in Mahra province, with Saudi and Yemeni forces recently killing or capturing several members of the group.

For years following 9/11, the UK’s Foreign Office provided Yemen with counter-terrorism training to deal with AQAP, but instructors officially withdrew in 2015 when the British embassy had to close as the war broke out.

Kalashat tweeted that Henzel “visited the American and British forces present at Al-Ghaydah airport”, complaining that it coincided with the anniversary of Yemen’s independence from British colonialism.

Then in March 2021 the former deputy governor of Mahra province, Sheikh Ali Salem Al-Huraizi, said US and UK troops were present at the airport and called for all foreign forces to leave, denying there was a terrorism threat to the area.

Al-Huraizi pledged to “reveal to the world the truth about what is happening in terms of the occupation”. He has since claimed that Saudi and Western forces have built more than 100 underground cells inside the airport.

Geneva-based advocacy group, SAM for Rights and Liberties, told Declassified that Yemenis are being tortured by the British-backed Saudi forces at the airport.

“Saudi forces operate the airport’s prison where they receive logistical support and military training by British troops stationed at the airport since the beginning of this year.”

“There are multiple violations, some of which amount to war crimes such as torture, enforced disappearance, [and] forced deportation beyond the borders of the Republic of Yemen.” 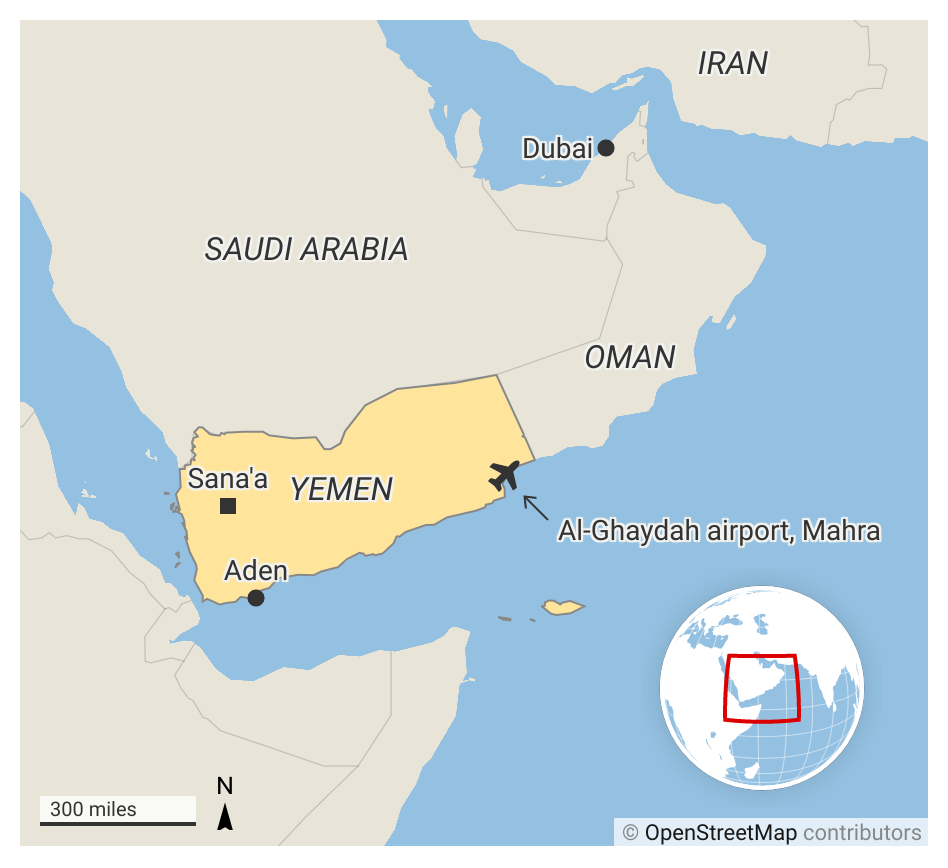 Based on testimony his group has received, Alhamidi said the airport has “large underground structures” that are used by the foreign forces.

He called for the airport to return to civilian hands, saying “it could have played a positive role in alleviating the suffocating blockade” that has left millions of Yemeni children on the brink of famine.

“It would have assisted in freedom of movement outside Yemen, especially for the sick, the elderly, and children,” he lamented. “Turning this facility into a prison where arbitrary detention and torture are practised is a crime under the Geneva Convention and the Rome Convention establishing the [International] Criminal Court.”

Human Rights Watch has accused Saudi forces of responding to protests against their presence in Mahra by having “arbitrarily arrested demonstrators” and torturing them in the airport detention facility.

At least five detainees were forcibly disappeared for months and illegally transferred to Saudi Arabia, the group claimed.

Michael Page from Human Rights Watch said last March the torture and renditions of Mahra residents “is another horror to add to the list of the Saudi-led coalition’s unlawful conduct in Yemen”.

The British government has repeatedly claimed that it is “not a party” to the coalition’s war in Yemen, which seeks to restore the government of Abdrabbuh Mansur Hadi that was ousted by the Houthi rebel group.

Despite these denials, the British military plays a key role in sustaining the Saudi war machine, especially in training, advising and supplying the Saudi air force bombing Houthi strongholds.

The Saudi takeover of Al-Ghaydah airport was partly prompted by concerns that the Houthis were smuggling weapons into Yemen through Mahra province over the border with neighbouring Oman, where 230 British troops are based.

Declassified asked the Ministry of Defence (MOD) why parliament was not informed about the deployment of troops and whether the UK is a party to the conflict in Yemen.

We also asked if British personnel in Mahra province have reported any allegations about suspected torture or cruel, inhuman or degrading treatment or punishment, in accordance with the government’s Torture and Mistreatment Reporting Guidance.

“The UK’s defence relationship with Saudi Arabia includes training courses, advice and guidance. This supports the efforts of Saudi Arabia to protect national and regional security, as well as their military’s compliance with international humanitarian law.”

The UK Foreign Office was also asked to comment.

Naseh Shaker is a freelance journalist based in Yemen’s capital, Sanaa.

Phil Miller is chief reporter and Mark Curtis is editor of Declassified UK, an investigative journalism organisation that covers the UK’s role in the world.

Featured image: A Saudi C-130 plane at Al-Ghaydah airport, where British troops are believed to be based. (Photo: Saudi military)