Data released today by the Centers for Disease Control and Prevention (CDC) showed that between Dec. 14, 2020 and Sept. 3, 2021, a total of 675,593 adverse events following COVID vaccines were reported to the Vaccine Adverse Event Reporting System (VAERS). The data included a total of 14,506 reports of deaths — an increase of 595 over the previous week.

There were 88,171 reports of serious injuries, including the reports of deaths, during the same time period — up 2,200 compared with the previous week. 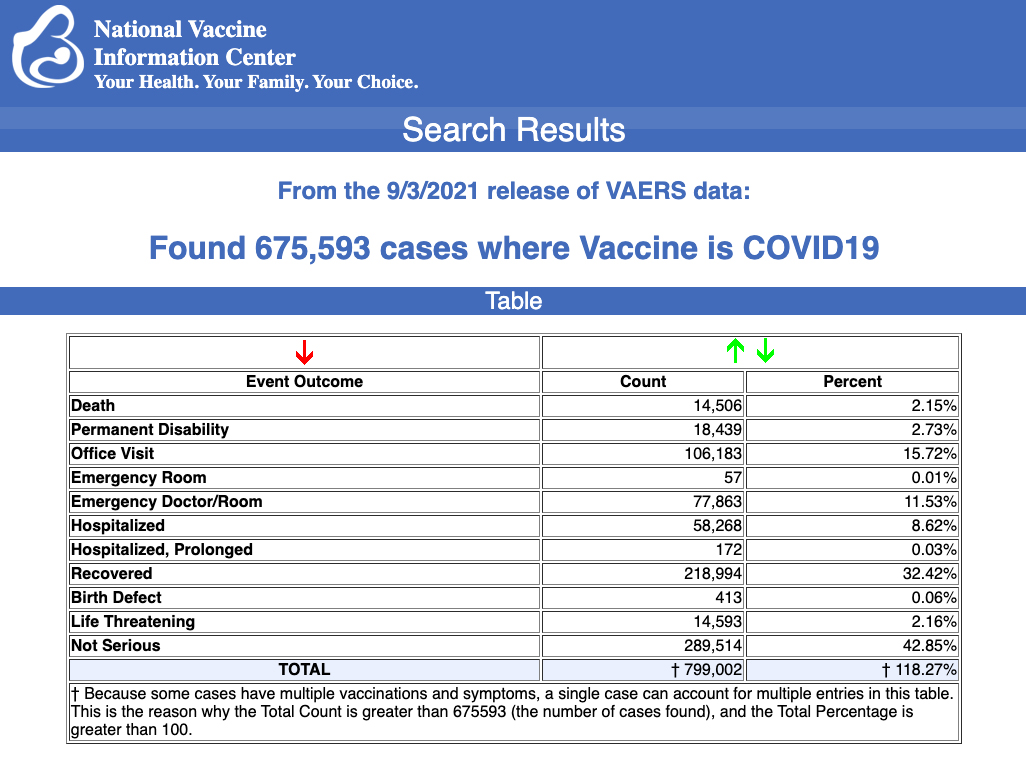 The data come directly from reports submitted to VAERS, the primary government-funded system for reporting adverse vaccine reactions in the U.S.

Every Friday, VAERS makes public all vaccine injury reports received as of a specified date, usually about a week prior to the release date. Reports submitted to VAERS require further investigation before a causal relationship can be confirmed.

As The Defender reported today, President Biden ordered sweeping new federal COVID vaccine requirements for as many as 100 million Americans — including private sector employees, healthcare workers and federal contractors — threatening thousands in fines for businesses that do not comply.

In his speech, Biden made no exception for the millions of Americans with natural immunity, and did not mention exemptions for those with medical conditions or sincerely held religious beliefs.

Biden’s plan mandates COVID vaccines, or weekly mandatory testing, for all employers with more than 100 employees. The vaccines will be mandated for all federal workers and government contractors — with no allowance for weekly testing.

Fauci’s vaccine-centric policies have given America more COVID deaths + cases than any other nation. With 4.2% of global population, America has suffered 14.5% of all COVID deaths. Instead of firing Fauci, Biden is doubling down on his failed policies.https://t.co/79POyNyaiC

The Defender this week featured a story about Dominique De Silva, a 30-year-old woman who developed severe neurological complications, pain and at times, an inability to walk, following her first dose of Pfizer’s COVID vaccine.

In an exclusive interview, Dominique said she got vaccinated because she has only one parent, and wanted to protect her mother and loved ones. On March 18, she and her now husband received their first and only dose of Pfizer. She subsequently developed a number of symptoms, including changes in her vision, which progressed rapidly over the course of several weeks.

After seeing numerous doctors, some of whom said her symptoms were “in her head,” Dominique was diagnosed with postural orthostatic tachycardia syndrome (POTS), a condition she did not have prior to being vaccinated, and autoimmune chronic demyelinating polyradiculoneuropathy — a rare type of autoimmune disorder where the body attacks the fatty coverings on the fibers that insulate and protect the nerves. She also had neuropathy and brain scan abnormalities.

According to the most recent data from VAERS, there have been 14,873 total reports of dystonia, dystonic tremors, neurodegenerative disorders, neurological symptoms, neuropathy, polyneuropathy and tremors following COVID vaccination.

The CDC revised its definition for vaccine and vaccination on its website, downgrading the definition of “vaccine” from a product that produces immunity to a preparation for protection. The agency said the new definition is “more transparent” and can’t be misinterpreted.

“While there have been slight changes in wording over time to the definition of ‘vaccine’ on CDC’s website, those haven’t impacted the overall definition,” a CDC spokesperson told The Epoch Times via email.

“The previous definition at Immunization Basics | CDC could be interpreted to mean that vaccines are 100% effective, which has never been the case for any vaccine, so the current definition is more transparent, and also describes the ways in which vaccines can be administered,” the spokesperson said.

Earlier versions of a vaccine definition also included “immunity” in its definition.

The new definition for the vaccine now reads, “A preparation that is used to stimulate the body’s immune response against diseases,” while vaccination is “the act of introducing a vaccine into the body to produce protection from a specific disease.”

Rep. Thomas Massie (R- K.y.) responded to the news in a tweet, telling his followers to check out the CDC’s evolving definition of “vaccination” and noting the agency has been “busy at the Ministry of Truth.”

Check out @CDCgov’s evolving definition of “vaccination.” They’ve been busy at the Ministry of Truth: pic.twitter.com/4k2xf8rvsL

The year-long study initially will follow 400,000 to 500,000 unvaccinated participants to observe changes that occur following each dose. Researchers will assess the prevalence and severity of post-vaccination changes to menstrual characteristics, including flow, cycle length, pain and other symptoms.

The analyses will account for other factors that can affect menstruation — such as stress, medications and exercise — to determine whether the changes are attributable to vaccination.

According to the most recent data from VAERS, between Dec. 14, 2020 and Sept. 3, 2021 there have been 8,184 total reports of menstrual disorders after vaccination with a COVID vaccine.
187 days and counting, CDC ignores The Defender’s inquiries

On March 8, The Defender contacted the CDC with a written list of questions about reported deaths and injuries related to COVID vaccines. We have made repeated attempts, by phone and email, to obtain a response to our questions.

Despite multiple phone and email communications with many people at the CDC, and despite being told that our request was in the system and that someone would respond, we have not yet received answers to any of the questions we submitted. It has been 187 days since we sent our first email to the CDC requesting information.