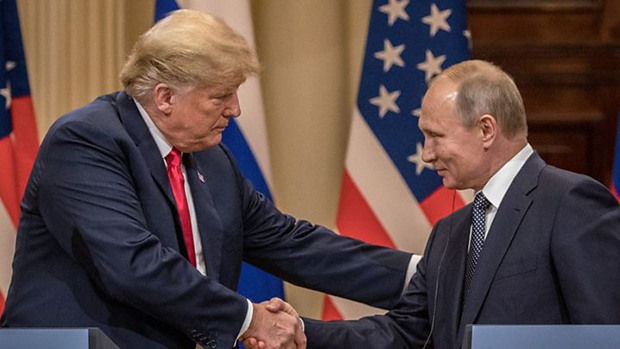 Thanks to my long-time former colleagues from the Intelligence Community, whom I worked with in my years with the FBI Joint Terrorism Task Force, from both inside and outside the US, I am pleased to be the ONLY media outlet to be able to report this extraordinary information . . . .

The jig is finally up. The Dominoes are all in position to be knocked over. The “elite” have phoned, faxed, and emailed many of themselves right into prison, or worse. (When the public finds out, probably “worse.”)

At the meeting in Helsinki, Finland, between Presidents Putin of Russia and Trump of the USA, the Russians gave to Trump at least 160 TERABYTES of Russian Intelligence Intercepts which expose horrifying activities of many, many, people to deliberately foment social, cultural, and political chaos, violent riots, demonstrations, media smears, phony scandals, and fake news.

Some of those intercepts reveal who has been financing weapons, supplies, travel, hotel, vehicle rentals and secure communications gear for Terrorist groups, inside Syria, Iraq, and terror attacks in Europe and the US.

Among the intercepted communications are mostly international phone calls, faxes, emails by members of the US Congress, US Senate, federal Judges, state-level elected officials from California, Oregon, Washington, New York (City & State), New Jersey, Connecticut, Massachusetts, Maryland and Virginia. Once those communications left the United States, they became fair game for any country to spy on.

A great number of these communications were encrypted, but Russia has found a way to BREAK much of the encryption! And as part of their effort to improve relations with Trump, they provided the original encrypted versions of the intercepts AND the key which decrypts them so the US can use US-obtained intercepts (which may still be encrypted) along with the Russian-provided decryption key to prove the info is accurate and unedited!!!

Numerous high-ranking officials and well known wealthy people have been caught red-handed scheming together and with foreign governments along with radical leftist billionaires both inside and outside the US, to foment — and finance — extraordinary acts of political, social, and cultural chaos including riots, violent attacks, political unrest and more.

Some high-level MANAGERS at gigantic social media companies have received literally millions of dollars in pay-offs to establish or use under-the-radar company policies to impose severe censorship on certain views and to silence certain people; often times without the knowledge or consent of the Highest Executives or Boards of Directors of those companies! These pay-offs USURP actual executive power in some giant social media outlets. (Source: halturnerradioshow.com)

This is an amazing claim because it would give President Trump the hard evidence he needs to take down many top level thugs within the corrupt deep state by showing evidence of their acts of bribery, treason and who knows what else. Although I have no way to verify it, I hope it is true and will be made public in the days to come.

Why would President Putin want President Trump to have this information? I think it’s because the same deep state thugs who want to remove Trump from office are the same people who have imposed sanctions against Russia in recent years in their efforts to cripple Russia’s economy in order to weaken their ability to replace the U.S. dollar as the world’s reserve currency. The deep state psychopaths are just as much of a threat to the people of Russia as they are to the people of the United States.

Please pray for God’s protection on President Trump and all those who are standing with him in this great battle against the corruption in our land.

Thanks to John McCanada and Matt NZ for sharing this news story.

James, I want to applaud your courage to report information that would not be considered to be “mainstream.” The deep state is very real and very active. It is not possible to describe the events of the last 20+++ years without acknowledging it’s existence. I would tell you more about it but it’s “classified.” And that’s exactly how the “deep state” operates; under the cloak of national security outside the reach all three branches of U.S. government, entirely bypassing the Constitution which is the very thing that was designed to protect us from these treasonous people. Bless you Brother!

Putin knows everything; all the dirty, sordid secrets. He probably even knows who pulled off Sept 11 – thanks to Edward Snowden. Think about it. When did Putin start throwing his weight around? And I don’t think he gave young Ed and his girlfriend asylum out of the goodness of his heart, do you?

Yashua said that everything done in secret will be revealed. I hope this is the beginning.

Yup and the guilty are getting louder and louder imo . Any republicans critical of Trumps meeting with Putin is probably guilty as well imo . I believe the first evidence of a deep state was when JFK was killed . it grew over time and spread through other government agencies imo .

Read the JFK report that President Trump declassified/released. There was a 4th bullet hole in the front window of the limo that was never reported before the last release of classified docs. The front limo window was replaced. According to the Warren report, Oswald had time for only 3 gun shots….

Did that bullet come from the grassy knoll? https://abcnews.go.com/Technology/story?id=98689&page=1

Unfortunately, nothing is going to change because people won’t repent and turn away from sins. Judgement is set and the bear will devour down the Eagle.

Exposing the deep state is always healthy: THE EMPEROR HAS NO CLOTHES. The deep state (emperor) is now exposed and will be taken down.

…Take anything from Hal Turner with a grain of salt, FYI

Yeah though he did call the whole Saudi-Bahrain banking embargo like three days before I saw it anywhere else. Who else would put this kinda stuff out if you had it anyway? All the ‘credible’ people are CIA Project Mockingbird types who can now legally disseminate literal propaganda made by the CIA/State Dept directly to Americans. Alex Jones, like a lot of us, has a 5 minute attention span about the latest abortion of justice before we get bowled over by another. Plus he’s a Zionist Talmudist Vatican Jesuit Assassin Warlock working for the Freemasons or something. Other Alt News people just don’t want to go in that deep, for whatever reason.

That said yeah I’m weary though I sorely pray that this is true though I had a sickening feeling that justice will only come in the court of God. If the Hagmann’s get on this then I’ll be more at ease,

While I would like to believe this is true, this news source is notoriously unreliable. Proceed with caution.

Not entirely sure why S. Quayle keeps linking to his articles, for that matter. 😕

Putin gives Trump an Adidas Telstra ball. This ball has an NFC chip in it. Near Field Communication chip connects to a smart phone or server & transfers information. In front of the cameras Putin says “The ball is in your court.” Q who gives inside info says “Keep your eye on the ball.”

I pray this is all true.