You are here: Home » News » Jesuit Schemes by Nation » Israel » Three Prophetic Warnings of a New War in the Middle East
Share this post: 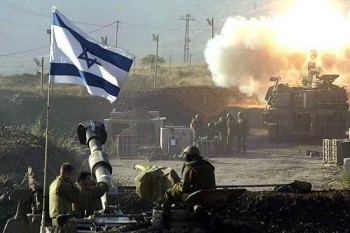 This article puts together three prophetic words received by three different prophetic ministers over the past few years regarding the start of a new war in the Middle East. There is a lot of overlap in the things they saw. By putting all of these words together, we can get a clearer picture of the future events in the Middle East.

Warning #1: At the beginning of this year (2013), prophetic minister Cathy Lechner from King Jesus Ministries in Miami FL shared the major events coming in the future. She made the following statement about a new war starting. She did not know for sure where or when the war would be, but she believes it will be in the Middle East.

The Lord spoke this to me:

“You will be forced to engage in a new war. There is going to be a new war declared that will be costly to lives and financially expensive to this nation. America will be drawn into it.”

I believe it will be in the Middle East, but we will see. We must pray that America does not get involved in another war that will drain our country and take the lives of our young men and women.

Warning #2: A similar prophetic word was shared by professional violinist and minister Maurice Sklar in December 2011. He saw a war coming in the Middle East, but did not know the timing of it. He saw the specific details of how the war will start and how it will then escalate. It sounds like the devastation will be greater than any of the other wars fought by modern Israel. Here is what he saw.

There is coming an all out war in the Middle East as the neighboring Arab nations will come against Israel with a sudden missile attack starting from the north with Hezbollah, Lebanon, and Syria. Other Arab nations will join. Israel will be hit from all sides at once and there will be deaths and partial destruction of settlements, smaller cities to the north, and some damage to Tel Aviv and Jerusalem as well. Israel will respond with great force, and limited nuclear weapons will release devastation upon the neighboring countries, particularly Lebanon, Damascus, which will be destroyed completely, and the rest of Syria as well as military strikes into Iran, Gaza, and even northern Egypt/Sinai region.

The resulting shaking of the West will then release a tremendous movement of Jews making aliyah back to Israel. There will no longer be security or stability as it has been up to now in America and Europe. Israel will emerge victorious from this war, but hurt. However, the devastation inflicted upon the attackers will be one hundred times worse. The spoils of this war will include much territory and will force the west to recognize the Holy God of Israel. It will emerge as the only stable country in the region. Many, even millions of Arabs will be killed. Islam will receive a mortal wounding by the Holy God of Israel.

Warning #3: Prophetic minister Sadhu Sundar Selvaraj received a prophetic word regarding war coming to Israel. Sadly, he was told that Israel will be betrayed by America in a political trap that will force her to surrender part of Jerusalem. The following is the transcript of his word and a 10 minute video clip is shown below that.

So I went to the balcony and I saw the Lord Jesus Christ standing very regally. And he beckoned me, “Come and stand beside Me.”

When I stood beside him he said, “Look at my beautiful city.”

The Lord Jesus said, “My city will suffer the pain of war.”

Then the angels that were standing by said, “In the war Israel will put up a stiff fight amidst heavy losses. A political trap will be laid for the city to be captured. And Israel’s best friend will betray her.”

Then the son of perdition, her best friend, will come to offer peace, a land for peace deal. When this will be done, very soon, Daniel 9:27 will be fulfilled. It will be fulfilled in the war. Then the angels who were standing by said to me, “Even now the son of perdition is making plans with the beast for this to happen. The UN will gather the nations to force Israel to divide Jerusalem.”

What will be the aftermath of dividing Jerusalem? It will be divided. Great earthquakes will take place in many places around the world, especially in the nations that will be involved in creating and conniving this plan to divide Jerusalem. It will be followed by great tidal waves of tsunamis coming to cause great devastation.

Sadhu then describes another encounter with an angel who told him more details about the consequences for America that were coming as a result of her betrayal of Israel.

Suddenly I saw an open vision right before my eyes. I saw a mighty angel with a long, drawn sword in his hand. And he stood before me speaking all of these words. Then he said, “This is what will happen to the best friend that will betray Israel and divide Jerusalem.”

When he spoke those words, I saw this map of the U.S. like in a three dimensional. It appeared right before my eyes beside the angel. And he took the sword and he pierced right into the heart of the U.S. and he cut it into two. He said, “Likewise will this nation be divided as Jerusalem will be divided.” He cut the land into two exactly in the center.

In summary, Cathy Lechner saw a war but was not told where while Maurice Sklar and Sadhu Sundar Selvaraj both saw a war starting in the Middle East, but were not told when.  Sadhu Sundar Selvaraj saw the details of how America set a political trap for Israel, which resulted in the judgment of God coming on our country and our land being divided by an earthquake hitting the center of America. Other ministers including Shane Warren and John Kilpatrick confirmed that same judgment as they both heard the Lord telling them He was dividing our land because we divided his land.

So we know there is a war coming in Israel but we cannot conclude with certainty when it will happen. However, when these words are considered in the context of current events in the Middle East, it appears it could happen very soon.

Prime Minister Benjamin Netanyahu has been warning the world for several years about Iran’s nuclear weapons program. President Obama’s administration has now had more than five years to intervene to stop Iran but has failed to take any serious measures. Israel does not want to fight alone but will do so if they must. Their very existence is at stake.

The Bible tells us the land of Israel belongs to God and the people of Israel are the apple of His eye. God promised that he would restore the nation of Israel and when He does they will never again be uprooted from their land. Since the nation of Israel was re-established in 1948 they have overcome incredible odds to defeat all of the Arab nations who attacked them, surrounded them, and far outnumbered them. There are many testimonies from soldiers who fought in those wars telling how the angels of God fought alongside the Israeli soldiers to give them victory. These events are the fulfillment of the word of the Lord spoken to the prophet Amos.

God will defend Israel again. They will prevail and their enemies will be destroyed. However, there are two important things we should all be praying.