Recent comments posted by Christopher Harris and Silent Warrior might be showing two big bounces ahead in BTC, but I’m only pointing this out as a possibility, an interesting theory based on a giant assumption that might be wrong.

In a dream on June 4, 2021, Silent Warrior saw a price chart for crypto currency LINK which he attempted to recreate as shown below. Although LINK is not the same as BTC, it has historically moved in a similar pattern, like many other alt coins. 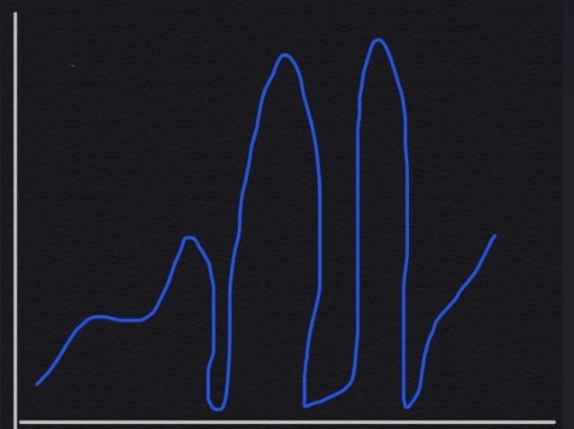 Like most prophetic insights, this chart is missing many important details, including prices and dates. The scale could be micro or macro and the timing could be near term or further out in the future, so this needs lots of confirmations before making any trading decisions, but I’m sharing it for three reasons. First, it has not yet been fulfilled so it’s still in play. Second, catching these moves could be very profitable so I think it’s worth prayerful consideration. Third, this chart seems to align closely with insights shared by Christopher. For example, on June 21, Christopher posted this comment, “I saw BTC move from 32k to high 39k and I saw this twice.” Then on June 28, Christopher posted, “I got two prices in mid 32k.”

Since Christopher saw the same move twice and later saw two prices in the mid 32k range, maybe he was seeing something similar to this chart with the bottom being in that range. In other comments, Christopher reported seeing different prices in the $38k and $39k range, so maybe he was seeing more than one top. However, seeing it twice does not necessarily mean it happens twice. And Christopher has repeatedly warned that his prices are not necessarily turning points so the top could be higher and the bottom could be lower. I can confirm the same for prices I’ve seen have rarely been turning points.

As we continue seeking God, asking Him for more insights, I believe He will reveal more details to either confirm or disprove this theory and give us something we can trade with confidence.

Thank you James. I want to add the prophet at Fireside Grace Ministry in youtube said in a video yesterday (around minute 20) there will be a similar move in the market as described in the picture you posted. It is very interesting that this prophet has said more than once he has not invested in cripto. However he has also said he has the responsability to share what the Lord tell him to say. He all also said 2 weeks ago that China will manipulate the market selling a lot of BTC that it will cause price to plummet and buy again at low price. He also said in that video China will repeat this operation several times. This line up with the shart silent warrior saw

What would be a good strategy to avoid been hacked? Taking the coins out of the exchange, put them on a wallet and wait for the drop, then go back in? The drop is imminent, I am applying the blood of Jesus over our crypto. Blessings

Hi:) Was just wondering what kind of wallet you guys use? Hardware? Any recommendations? Thanks for all the advice in advance 🥰💖

I have a trezor model T and a ledger nano s. Love both! Ledger let’s you stake zil easily. Trezor model t easier to use. Exodus wallet is free and considered safe if you keep your passwords written on pen and paper only

Thanks a bunch!! That’s very helpful 🙂

Thanks for this article, James. Based on the SW drawing, I assume that two more bullrun coming. I thought final pumping will come this summer which is 5 wave. But I realized I could be mistaken after reading this article. This bullrun could be much more huge than I expected. I don’t fully understand God’s big picture but we pray and study this market. God bless CH, SW, James and z3 brothers.