You are here: Home » Prophecies » Prophetic dream warns of a big storm striking the Atlanta area.
Share this post: 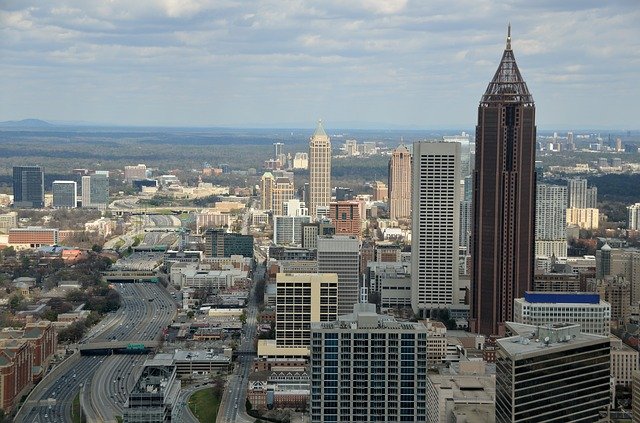 In a dream today, I was in a high rise apartment, a skyscraper, so I had a great view looking down on the city of Atlanta. I was getting stuff ready because a huge storm was coming and the wind had already started blowing hard and was causing stuff even inside my apartment to blow around because I had large windows open everywhere for some reason. I looked down to my left and saw a large sports stadium that I knew was in Atlanta. There were no events happening there at the time so no one was in it but I was amazed to see a huge swell of brown water surrounding the stadium and quickly poured into it and filled it about halfway to the top with water swirling around inside. It looked treacherous down there as the water was everywhere and my sense was that the storm seemed to be just getting started.

As I was watching all that, a strong gust of wind blew through my apartment and was blowing everything around. It picked up a straw hat that belonged to my sister in law so it was flying through the room. I ran towards it to try to catch it but it was too late and it flew out the window. As I was watching, a second hat flew out another window before I could catch it. End of dream.

Although I live near the Atlanta area, I don’t live close enough to see the city or any stadiums, so I think my location in the dream and seeing an Atlanta stadium getting demolished by a sudden storm sounds like a warning for this area. It reminded me of the dream shared by Maria Conwell on July 24 in which she wrote this:

“This morning I awoke to this warning song in my spirit:

And then I heard “Atlanta”. And I saw a tan welcome mat made of straw/hay. Written on it in black letters was one word, Atlanta. Next, I felt the Holy Spirit blanket me like a warm presence; I believe that Holy Spirit wants to blanket and protect the people of Atlanta from a planned bombing. (see complete post)

I don’t know if the storm I saw is the same one Maria saw, but I agree with her that God wants to protect us from it and He is able to do that if we’re willing to seek Him for instructions and obey whatever He tells us to do.

I think this dream also includes lots of market symbolism. For example, my location way up high in a skyscraper could be showing the position of the stock market will be way high when this storm hits, similar to how it is now. Looking down on the city below could be showing where the market is going, way down. Since water was covering the city and filling the stadium, that sounds like a financial metaphor for being under water as the storm causes investors to lose money. Brown commonly represents the equities market, so the brown water sounds like the losses will be incurred by anyone owning equities. Also, hats often represent tops in the markets, so two hats getting blown out the window sounds like two upcoming tops that will be blown out of sight by this storm.

The reference to tops also aligns with my recent frog dream in which a frog took several hops before hopping into a deep crater where he dropped straight down. In that same post, I shared another recent dream in which I was warned about a big drop in equities specifically on Monday the 23rd, but was not shown the month or the year. Since the next occurrence is on August 23, 2021, I wondered if that might be the date, but I no longer think it is for two reasons. First, the equities market has been making very small moves lately, so it’s not confirming the hops have even started yet. Second, I received another dream today that seemed to be showing it’s not time yet for a big drop. In this dream, I was starting to go down the wooden steps from my house into my garage. As soon as I put my left foot on the first step, I lost my balance and started falling but was able to avoid the fall.

Since wood is a common dream symbol for equities and the steps were wooden, I think this is about equities. Attempting to take a step down shows an attempt to open a short position to make profits from a drop in the market. Losing my balance sounds like a warning of losses for anyone attempting that right now. Stepping down with my left foot is another indication that this was not a good move because the left side is a dream symbol for bullish moves in the markets, so it was not the right move to make for a short position.

I don’t know if the dream today has any connection to Monday the 23rd, but if it does, the next occurrence is in May, 2022. Beyond that, there are two occurrences in 2023, in January and October. If historical patterns are repeating, previous market crashes have often hit bottom in October.

The strong winds suddenly striking Atlanta reminded me of several recent prophetic words showing sudden changes coming for many of God’s people, as many have recently shared seeing strong winds coming to usher us into a new season, as shown in the following examples.

Recently I heard the Lord say, “The winds of sudden change are changing the directions for many into a completely new season.” When the Lord spoke this, I was surrounded by the strong sense of miraculous overnight sudden shift and change. This was not a ‘gradual’ it was ‘slowly building’, this was the sense of miraculous incredible sudden winds of change that seemingly “came out of nowhere” and shifted the directions of many of God’s people into a completely new season. (see complete post)

You’ve done what you can do now this is where you watch God do what only He can do. You tried everything to keep that old thing alive and breathe life into dry bones but to no avail. Now watch as the four winds of God blows upon your life, cleansing you, healing you, and resurrects something brand new… I saw that the months of August – October were shifting months for the pioneers. (see complete post)

I don’t know if there’s any connection between the winds others have seen and the storm winds I saw in my dream today, so I’m just sharing different insights so perhaps others can add to it and help all of us gain a better understanding of what’s ahead. In any case, I believe God wants to help His people avoid the losses incurred by those who are away from Him and fail to prepare.

A sudden destructive storm striking Atlanta is not what any of us want to see, especially with all the trouble already in the world, but God is always good, even when our circumstances look bad, because He uses these kinds of events to bring correction to those who need it.

I will share a Dream I had a while back.

The Dream was of a river that runs through my hometown. The river was brownish and looked heavily polluted, and was swirling, someone then dived into the river, End of Dream.

Not long after my Dream, two different people within about a months period, both drowned.

Watchman Daniel Bohler received a word many years ago that Atlanta would have a blackout and that after this – many other cities across the US would also lose electricity.