You are here: Home » Prophecies » Prophetic dream reveals heavenly rewards for the righteous. 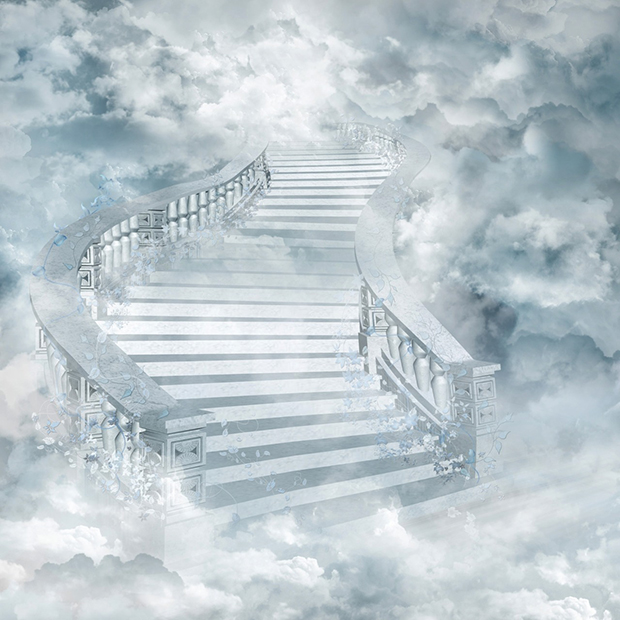 I have been holding onto this dream for a very long time now, but am being prompted to share it at this time. The world is becoming darker by the day and I believe this dream will be uplifting for all. I had this dream long ago, years before the Lord began waking me up and called me back.

In this dream, I found myself standing in the clouds before a curved terrace or platform type of structure that seemed to be constructed out of a beautiful white marble. Three or four steps ran along the entire length of the front of it. Curiously, there wasn’t any kind of roof, but there were a number of round columns. A wall ran along the entire length of the back of the platform with an open doorway in the middle.

As I walked up the steps, I could not see what was through the open doorway and at no time was I allowed to. As I reached the top of the steps, there were a number of children, young adults, and others of various ages. They all seemed to be preoccupied doing various things but it was very unclear, almost foggy. It wasn’t long before I understood.

I turned and looked to my right and there was a man standing there wearing a white sackcloth. It was Jesus. (It wasn’t until our Lord began calling me back 6 or 7 years ago that I realized this man was Jesus.) He looked at me with a smile and jokingly said something along the lines of, “Oh, you aren’t supposed to be here yet.”

He then beckoned me to follow him as He walked across the platform to His left. That is when I understood what was going on. I saw a young Asian girl playing a cello beautifully. No doubt Bach and Mozart would have approved.

Jesus then communicated with me in a way that is hard to describe. It wasn’t verbal nor was it what we might think of as telepathic. It was almost as if it was a combination of both and with images, giving me an instantaneous knowing and understanding. He showed me this girl had a very deep love of music and wanted to play an instrument very badly, but musical talents were not part of God’s plan for her life on Earth.

Then He again beckoned me to follow Him. This time He led me to a book case, which stood about 4-5 feet high and maybe 3-4 feet wide with 4 or 5 shelves on the front and back. He told me to go ahead and take a look at one of the books, so I went around to the other side, bent down and pulled a book off the second or third shelf. When I opened it I was amazed at what I saw. These were encyclopedias of Gods creation(s). When I looked at the words, they quickly turned into images and instantly I understood what I was seeing. I saw outer space and several galaxies, but wasn’t allowed to remember any specific details.

After a few moments, Jesus told me that was enough, so I put the book back on the shelf. He then directed me towards a podium and instructed me to go look at what was on it. Sitting on the podium was a very large leather book. I was told to look in the book and find my name. That is all I remember and the dream ended.

Robert W’s Interpretation:
I have often thought about this dream, but never really understood it until about two months ago when suddenly our Lord gave me the answer. Low and behold, I was listening to someone, I don’t recall who it was, talking about rewards in Heaven. That is when I realized that myself and everyone else who was there was being shown something in regards to our rewards. The girl playing the cello and what Jesus told me about her suddenly made sense. The reason He took me to the book case became crystal clear. Unlike the girl, I was given musical talents in this life. I knew when I was 9 years old that I wanted to be a bass player, but on the other hand, as far back as I can remember, I have always had a very deep passion about space and what is out there, wondering about God’s endless universe. God knows that in my heart, my desire doesn’t stem from a lust for power, wealth or to become a “god”. Rather, a simple curiosity stemming from the wonderment that God Himself created me to have.

I hope and pray that in some way this dream will help some who may be struggling right now. God Bless!

What an amazing and beautiful dream about heaven. I love watching the You Tube videos about heaven, and even the very sad insights concerning hell. There is nothing more exciting than to find the gems of TRUTH God offers the Saints of the Lord. God Bless You.

This was wonderful to read, Robert, thank you for being willing to share it via James.
The most profound dream I’ve ever had (back in March 2016) concerned what I would be doing in Heaven (along with my sister), as well as showing me spiritual insights, and the memory of it has since sustained me through some dark periods.

As the Scripture says, “no eye has seen, no ear has heard, nor has it entered into the mind of man what God has prepared for those who love Him.” 1 Cor 2:9

Would you be willing to share that dream Christina?
Sounds like it would perhaps be encouraging to us as well

Hi Yawchal, Basically I was shown that my sister and I would be running a Heavenly B. & B. and that the “guests” would be those who had just arrived in Heaven. The home we lived in was my home but was also my sister’s home. I also “knew” that the rest of my family were somewhere else in the house and that it was theirs, too (I did not understand how it could be all our homes until I woke up and then John 14:1-3 dropped into my mind – it is Father’s Home and our homes are in His Home but they are also our individual homes). The dream started in our kitchen, with my sister and I talking and laughing. The kitchen was beautiful beyond description with wood that glowed with an inner light. The doorbell rang and my sister went to answer it and then came back to tell me our next guest had arrived. Immediately we were in a stunning room, like in one of those stately English homes you see in period dramas, showing their guest their ante-room and helping them settle in. I turned a lamp on and then the doorbell rang once more. Again, we were immediately in another part of the house, not having moved there by natural means, this time at the front door. My sister opened it and a very old lady was standing there, all hunched over and leaning on a cane. I remember thinking to myself in the dream, “Wow, we get all types here” I did not know the age or gender of the previous guest but I knew it was not an old woman. We showed her to her room (immediately there again) and it was like the previous one (stately English manor-type) but with… Read more »

The funny thing is just today I was thinking that I was certainly not called to be a worship singer, or that my voice is anointed at all haha🤣 I do know God loves hearing my voice, but I was asking the Lord that I would be given a wonderful singing voice in heaven and I believe I will💗 I will enjoy singing and serenading my Jesus for eternity will an excellent voice! Thanks for sharing this, it has been a wonder of mine too. I love hearing what others have been shown, an exciting read for sure, thank you Brother James!!!

John Bevere on Bro. Sid’ Roth’s show regarding this subject: