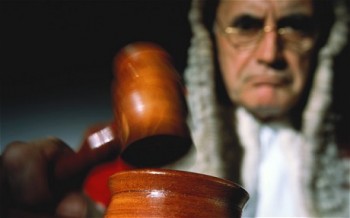 I’ve held this word for quite some time. It came as a dream about the United States of America.

I found myself sitting in what can only be described as a frantic courtroom.  I sat and watched as one witness after another presented their evidence.  One came forward and shouted with tears, “Look at this wickedness!”

I looked and saw horrific pictures of dead babies and children.

Then another came and shouted, “Look at this greed!”

Then another shouted, “Look at this pride!”

Then another, “Look at this corruption!”

This went on as more and more irrefutable evidence of guilt was given. It got to the point that the courtroom was in a frenzy of outrage. Yet the high judge just sat and listened until every accusation had been given and all the evidence had been submitted. Once all this was done he still sat silent.

Finally with a loud voice the judge said, “Silence!!”

Immediately every person became silent and sat down. The judge spoke and said, “I have heard all and seen all. The guilt of these lands of the United States of America is in deed great! I have decided judgment is indeed due and right!”

The people cheered, but he commanded them, “Be silent!”

“Before I pass my judgment I have one last witness, can the Holy Spirit take the stand please?”

An old woman came forward. She was old, but not frail in any way. Her eyes shone as she stood in the dock.

The judge asked, “Do you have your evidence?”

She replied, “I do indeed.”

Then she pointed to the video screen. There appeared an image of a small child on her knees praying. Then a teenager, then an adult, image after image appeared of more and more believers of every age, class and race falling to their knees in prayer, then the screen went black.

The judge asked, “Is this the last of your evidence?”

The judge replied, “Please step down.”

All eyes in the room were fixed on him.

“Your evidence is indeed compelling, yet the guilt of this land is indeed great, in fact it grows daily. I have therefore chosen judgment.”

He placed a black cloth over his head, took the hammer in his hand, and struck the gavel. Then he said, “I find this land worth of…”

“… a great revival the likes of which has never been seen before or will be seen again!”

As he said this, blood poured forth from his throne and swept every accuser out of the room!

I then saw a map of the United States going up in flames as God began to answer the prayers of his burning ones.

Then the Lord spoke and said, “The guilt of this land is indeed great, but my praying church and my shed blood is greater! So I grant a great revival that will take every street, town, and city. For I will not have the cries of my people unheard, this land will arise and she will indeed shine! In what seems to be her darkest hour she shall shine at her brightest!”