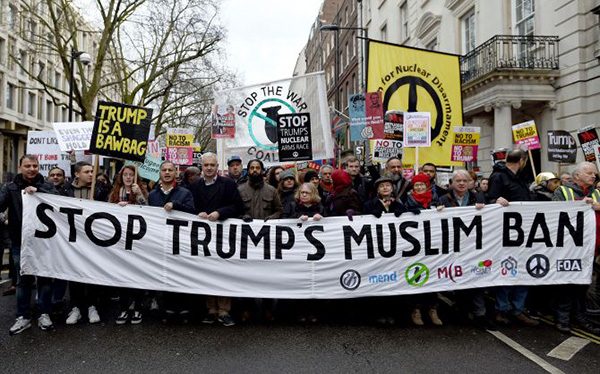 President Trump has been harshly criticized by many Americans for his recently announced travel ban, temporarily halting immigration from seven Islamic nations, all known for their support of terrorist activities. However, his policy is finding growing support in Europe.

Trump’s nationalist policies are a direct assault on the open border policies promoted by globalist leaders of the European Union. However, open borders have had disastrous consequences as Muslim immigrants have flooded into western European countries, including Germany, France, the UK, Belgium, Austria, Sweden, and others. Wherever significant numbers of Muslims have migrated, terrorist incidents, crime rates, and diseases have all skyrocketed. Some areas are now called “no-go zones” because non-Muslims are forced to stay out for their own safety, including police and ambulances.

Meanwhile, eastern European countries like Poland and Hungary have resisted opening their borders and have had far less problems.

After years of open borders in Europe, growing numbers of Europeans have had enough and now want to stop all Muslim immigration. They have endured great trouble as a direct result of Islamic immigrants. A new survey conducted by Chatham House asked more than 10,000 people from ten European nations whether they agree or disagree with the following statement: “All further migration from mainly Muslim countries should be stopped”. In all but two of the ten nations, the majority of participants agreed:

Overall, 55% agreed that all further migration from mainly Muslim countries should be stopped, 25% neither agreed nor disagreed and only 20% disagreed. (See the full report)

In Germany, the Muslim population has already reached 6 million and is expected to more than triple to over 20 million within the next three years. (Source: Gatestone Institute) It is like a freight train out of control, very hard to stop now, but the shift in public perceptions is a good start.

With national elections coming soon in France and Netherlands, the new attitudes are threatening to shake up the political landscape as conservative candidates Marine Le Pen and Geert Wilders have good chances of winning. In both cases, Muslim migration has become a focal point of the campaigns. Wilders is even calling for a ban on the Koran.

Their victories would be a big blow to the globalists in Brussels who are suddenly finding all the facts aligned against them. Their only response is name-calling, accusing anyone sharing the facts of being racists and Islamophobes. The foolishness of the globalist policies is being exposed and they don’t like it.

The Europeans have learned the hard way, Islam means trouble. Hopefully, the American people won’t have to.

Canada and the U.S. was built by Imigrants. They came here with only their bare hands and opened new frontiers. No body gave them any thing they were pioneers. Today in Canada our government gives even imigrants illegal or other wise a starting out fund until they get used to our customs and find jobs. $2.400 per month as a living allowance it is noted that some can’t find jobs for years because they havn’t learned the langusge but the beat goes on. We seniors get a maxamum of $1.400 per month and we paid taxes all our lives. It seems like our government is out to destroy our country. Our prime minister only got elected by the young people because of his good looks, he has no life skills what so ever. born with a silver spoon in his mouth and pampered all of his life. God have mercy on us.

Blessings Dave! Here is a related video clip (https://youtu.be/JFeWD_MhQoE) from ‘Rebel Media’ about illegal immigration coming to Canada – bigly! As a fellow Canadian I share your concern and your frustration.

Just read, “Seeking Allah, Finding Jesus”, by Nabeel Qureshi. He navigates through his quest for God, and finds Mohammed and the Quran to be other than the airbrushed examples which he was taught as a child. Well written and easy to read story , Nabeel’s recounts his experiences which include dreams and visions which confirm what he suspects is true (Jesus is the risen SON of GOD). We have NOT gone out into the world, so it has come to our doorstep. Many Muslims are being baptized in Germany.
https://www.facebook.com/NabeelQureshi.org/

I read it and it is right on. And we got to keep praying for these people. Gods will is for none to perish but for all to come to repentance. I do have a problem praying for those that God gave over to a reperbate mind, all I can do is say Lord you can deal with them. Amen.

Good article. This video below rocked my world when it came to understanding Islam in the light of history. This 44min video is jaw dropping. Talk about revisionist history. Share it far and wide

Thanks, I am looking forward to watching it.

Despite from the huge challenges the refugees and asylum seekers from the Middle East represents in bot USA and Europe, I would like to emphasize the opportunity this situation gives us as christians and as a church, as well. The Norwegian office of Open Doors International recently shared a letter they have received from a pastor in a church in the Middle East. It has been on my heart since, and today I was encouraged by the Lord to share it. Translated from Norwegian with the help from google translator, so sorry about any grammar mistakes. “Dear pastors and church leaders in Europe. I greet you in the neame of Jesus Christ. We are now in a critical season when it comes to the flow of refugees into Europe. You’ve got this great opportunity now. You may choose to ceize it or let it go and loose it. The families arriving at your shores are broken and in great distress. A warm and heartfelt welcome may change their perspective and belief in a short time. They are fleeing the tyrant of islam and as a result struggling with their relationship to their birth religion. They are raised to believe their nation and religion is number one, above all others. They are taught that everyone outside islam will perish. Most of them never had the opportunity to ponder about religious questions in general, nor were they allowed to ever doubt Islam. Now is the time to act. Now is the time for a new crusade, but with the right weapons. Make use of prayer, belief, share the gospel, give helping hand in social needs, and lots of love. The muslims are victims of their religion. They need someone to help them open their eyes and set them free. You don’t need… Read more »

Nigel is pretty awesome! Thanks for sharing, GL.

Hey Gary, Wish we had a 100 more like Nigel. I always read your comments. They show a great deal of wisdom. Good name you got there lol. And your’e the reason I tagged on my middle name. The only One to ever call me Gary Lee was the H.S. during pray time and now my Z3 family. I’m kinda liking it that way. God Bless Gary.

Hi Gary Lee! Thank you so much for your kind words. I continue to enjoy reading your comments as well. Your recent post about wondering what Francy’s thoughts were on FAZ was quite interesting and definitely beyond the realm of coincidence. We are so blessed by the input and feedback from James and so many Z3 family members.

With respect to our name(s), I was encouraged a few weeks ago to do some digging on the meaning of my name. I wasn’t able to find too much yet on ‘Gary’ however since I was named after my grandfather ‘Guerino’, I did some research on that name.

I was intrigued to learn that it translates to ‘warn, guard, protect, preserve’ from the ‘Old High German’ language. I found this to be particularly significant as I have felt a calling over the past several years to be a type of ‘Watchman’ (as described in Ezekiel 33). May the Lord continue to richly bless you and your family.

very relevant as we see Islam and its positioning globally, inspired and ideally funded by a counter-Israel Obama Administration and I believe He and Soros are in no way finished attempting to complete what was seeded so long ago. Great word today.

Here’e what I think happened to General Flynn. I suspect that Reince Priebus told-ordered Flynn to change his story about what he discussed with his Russian counterpart and then hung the conservative, patriotic general out to dry as untrustworthy. Priebus can’t be trusted who has worked for the democrats in the past and is part of the swamp. Pray for Trump because this is David against Goliath.

Rick Wiles is back on tract naming the communist Neocons as the driving force behind the deep state. He believes the Russians have thrown off the yoke of their former communist slave owners of the 1917 Revolution and that is why the Neocons in Washington are so vehemently provoking war against them. This is a must listen. http://www.trunews.com/listen

Yes Bob thank you for this —Ehp 6 –for every moment of the day and night !
This is the Rick I know and have missed !

You are absolutely correct James. The Globalists continue to use many tools in their proverbial tool box to weaken and disrupt nations (particularly stronger ones) to usher in chaos in order to facilitate their agenda of control and global domination that will include one world government, one world religion and one world currency.

These ‘tools’ include, but are not limited to, open borders (that invite growing hostility towards cultural identity and norms); ‘free trade’ that invariably weakens strong nations and provides more profit to global(ist) corporations; corruption (and weakening) of central banks, exaggerated ‘global warming’ claims and growing regulation to attempt to reverse it; watering down of and hostility towards Judeo-Christian doctrine; promotion of alternative lifestyles and sexual identity, political upheaval and hostility, etc.

This video (https://youtu.be/iwk2UfgrgN4) by Jim Staley is Part 1 of a 3 Part series that explains and extrapolates on the systemic and highly intentional Islamic invasion throughout the world. Based on demographics, birth rates, trends, etc., Jim’s analysis shows that it likely won’t be long before Muslims make up the majority of the population in many nations throughout the (western) world.

Thank you James for all that you do for the Z3 family and may the Lord continue to richly bless you and your family.