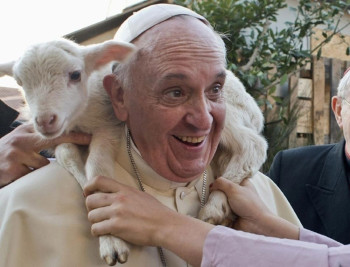 The Bible warns us a second beast will arise in the last days with the appearance of a lamb and speaking the words of a dragon (Revelation 13:11). The appearance of a lamb reveals he will be a religious leader because the Bible refers to God’s people as sheep and the Lord Jesus as the Lamb of God. The words of a dragon reveals he will speak the words of Satan, the father of all lies. So we know this beast will hide behind the guise of religion while speaking lies.

The second beast will make everyone on earth worship the first beast (Revelation 13:12). The fact that he oversees worship is another confirmation he will be a religious leader.

We have not been given the dates when this beast will arise, so we are instructed to watch and be on the alert (Matthew 25:13, 1 Thessalonians 5:5-6). So in obedience to those instructions I am issuing this warning that we now have a strong candidate for the job. We have a religious leader going all over the world attempting to unify religions while speaking lies.

Since taking office in March 2013, Pope Francis has been on a mission to unite all the religions of the world. For more details on that, see my previous post, “Pope Francis Taking Unprecedented Actions to Unite World Religions.”

His stated goal is to bring unity to people of all faiths.He is having great success achieving that goal, which should come as no surprise because he is telling everyone exactly what they want to hear. The world has always wanted to hear they are going to heaven. So it is extra special when it comes from a chubby old man dressed up in a Pope costume.

The only reason they hated Jesus was because He exposed their deeds as evil, which meant they would not go to heaven unless they humble themselves and repent, which means stop sinning (John 3:19-20, 7:7). Everyone wants the blessing, but few are willing to repent. That is the crux of the issue. So by tossing that issue out the window, Pope Francis is now on the fast track to world unity. We are rolling now baby!

There appears to be no limits to what Pope Francis will say or do to achieve unity among all religions. In fact, he doesn’t even require us to have a religion, but claims even atheists go to heaven!

On Wednesday, May 22 2013, just two months after the start of his papal reign, Pope Francis made the shocking claim that even people who don’t believe in any God still receive salvation and go to heaven. His remarks were made during his homily at his morning Mass in Rome, a daily event where he speaks without prepared comments. He told the following story of a Catholic who asked a priest if even atheists had been redeemed by Jesus.

The Lord has redeemed all of us, all of us, with the Blood of Christ: all of us, not just Catholics. Everyone!

Even the atheists. Everyone! And this Blood makes us children of God of the first class! We are created children in the likeness of God and the Blood of Christ has redeemed us all! And we all have a duty to do good. And this commandment for everyone to do good, I think, is a beautiful path towards peace. If we, each doing our own part, do good to others, if we meet there, doing good, and we go slowly, gently, little by little, we will make that culture of encounter that so much. We must meet one another doing good.

“But I don’t believe, Father, I am an atheist!”

But do good: we will meet one another there.

So according to Pope Francis, it is not necessary to believe anything as long as we do good. He claims even those who do not believe in God are still redeemed by the Blood of Christ by doing good.

Immediately after he made these comments, some Catholic websites scrambled to do damage control, trying to make it sound like he did not mean what he said, but it was too late. The damage was done. The quote shown above is exactly what he said, which is atheists are redeemed by the Blood of Christ if they do good. No matter what other people say to try to explain it, the key point is Pope Francis has never apologized or attempted to take it back. That seals the deal.

Yeah! Let’s have a party! We’re all going to heaven! Hooray for Pope Francis! Or maybe not.

Pope Francis’ popularity is likely to continue to soar. The world loves this guy! He should have no problems ahead, except perhaps from those pesky little Christians who know what the Bible says. They will reject his message because they will recognize he is contradicting the Bible.

The scriptures repeatedly state there is only one way to be saved and that is through faith in Jesus Christ. Here are some examples:

And there is salvation in no one else; for there is no other name under heaven that has been given among men by which we must be saved. (Acts 4:12)

If you confess with your mouth Jesus as Lord, and believe in your heart that God raised Him from the dead, you will be saved; for with the heart a person believes, resulting in righteousness, and with the mouth he confesses, resulting in salvation. (Romans 10:9-10)

According to the Bible, no one goes to heaven by doing good. No one receives eternal life without being born again and no one gets born again without confessing Jesus Christ and believing in their heart that God raised Him from the dead. By attempting to by-pass those requirements and substituting them with his own requirement of doing good Pope Francis twists the scriptures the same way the serpent in the Garden of Eden twisted the words of God.

Now the serpent was more crafty than any beast of the field which the Lord God had made. And he said to the woman, “Indeed, has God said, ‘You shall not eat from any tree of the garden’?”

The serpent said to the woman, “You surely will not die! 5 For God knows that in the day you eat from it your eyes will be opened, and you will be like God, knowing good and evil.” (Genesis 3:1-5)

Believers should stay away from Pope Francis and warn others to do the same. He is not someone we should endorse or embrace or stand next to smiling for the camera. The best thing we can do to help others is expose Pope Francis for the liar that he is.

If you want to know you are going to heaven, find out here.

Also, Walid Shoebat believes that Obama is working hand in hand with Erdogan of Turkey to revive the Grand Caliphate (see link below)
http://shoebat.com/2015/02/21/tough-questions-impossible-refute-proves-obamas-policies-part-master-plan-revive-grand-muslim-caliphate/

I agree with Ryan that Joel Richardson’s book, “The Islamic Antichrist” is a very good one. Another good one is “Arab Spring, Christian Winter” by Ralph Stice. His chapter on Turkey and the coming Grand Caliphate is particularly fascinating, and relates to what Ryan said about the revived Ottoman Empire.

I agree with both of you about Joel Richardson’s book. I read it last year and it is one of my favorite books. I have not read the Arab Spring book but it sounds like a great one. Thanks!

While Pope Francis appears to be one of satan’s little helpers, he is not nor will he prove to be the antichrist or false prophet. The beast being spoken of that had a mortal wound, but was healed could very well be the revived Ottoman Empire. Recep Erdogan of Turkey is leading a scary nationalist movement that will unstabilize the entire middle east. I would really urge fellow believers to read “The Islamic Antichrist” by Joel Richardson. A phenomenal read that provides another perspective on eschatology. The model of the antichrist and the false prophet is in perfect symmetry with Islam today and their idea of who Isa (Jesus) is, and the spirit of antichrist as stated in 1 John 2 and 2 John. Please, get a copy today.