You are here: Home » News » Jesuit Schemes by Nation » Australia » People were screaming, “I don’t have it! I tested negative!”
Share this post: 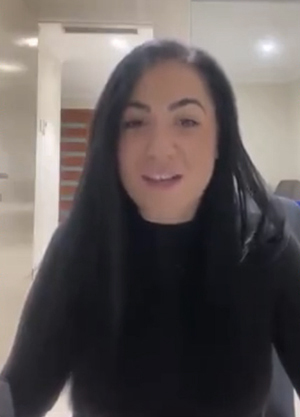 In the 13-minute video shown below, an Australian woman named Maria Zeee tells the horrifying story of what happened to a young man, 19 years old, after he was admitted to a Sydney hospital with pneumonia. Maria posted this on Instagram. This video is also available on Bitchute.com.

After arriving at the hospital, he was diagnosed with pneumonia and tested negative for COVID-19. Since he was having trouble breathing, he was put on a respirator. When that failed to help him, he was put into an induced coma. After three days in a coma, he woke up in an intensive care unit. Then he was moved into a COVID ward where…

He noticed some really strange behavior from the nurses. They were being very “shifty.” He was being asked to take some medicines he did not understand why he had to take. He was being treated as a COVID patient, when he did not have that.

Once he regained his strength, he stepped outside the door (into the hallway), what he saw “looked like a movie scene.” He saw people were on the floor, people were being restrained by nurses and police and given treatment for COVID-19 when they did not have it. He said people were screaming, “I don’t have it! I tested negative!”

Apparently he said people were being rushed off to a psyche ward when they were claiming this. It was a special psych ward moved from what they call Entrance 8.

He didn’t understand why there were police holding people down for forced treatment. And he said no one was allowed to visit their family in there, obviously, because it’s a COVID ward, so no one really knows what’s going on.

A nurse later told him, “I’m the one who saved your life.” Then she told him that while he was in the induced coma, he had actually died for five minutes and on his death certificate, they declared it a COVID death but it was not. He had pneumonia. She explained this is what they’re being asked to do, this is what they’re being paid to do and that he just needed to play along so that he could get out safely.

Maria is planning to do a second video interviewing this man so everyone can hear his story directly from him, but she has advised him not to do it due to concerns for his safety.

People are waking up!

Feel Australian believers can make a difference.
Get together,take authority over this and bind it in spirit level as per Mathew 18:18
Lawsuit especially based on recent Calgary,Canada model where state could not produce proof of isolation of the live corona virus. Whatever fact checkers claim on Google, Calgary completely free of all covid restrictions 4 days after the live virus culture demand made in court.
Show this video to MPs like Craig Kelly or even Pauline Hanson.

Gobsmacking.!! absolutely.. James I am soo Glad you have put this post up on Z3 News

happened : ? was it the Elmshurst hospital and Mamonides hospital in NYC.

Ventilators etc. One other Registered Nurse also (female) working on the covid wards

also and declaring all of the patients were covid ones. Such coverup and inconsistency.

So the DR Death schemes of the evil cabal and their puppets can be carried out.=

to the left of the road and footpath. I gasped when i saw it as I was feeling a little tired and

going thru right now. I had to come home & look up what Dr Death was all about.

Oh BUT the BLOOD OF THE LAMB! TO FIGHT ALL THIS WICKEDNESS IN HIGH PLACES.

https://stateofthenation.co/?p=30117
You might be interested in this info. I had previously seen it all in bits & pieces over time but this has everything in 1 location.

Thank You Barbara..Found your comment and looking @ the link you sent – Right now..

Wow! Yes all the pieces of the puzzle come into Light. after reading and looking @ the . link;State of the nation..