You are here: Home » Prophecies » “My people need to STAND UP and be counted worthy of protecting MY NAME.”
Share this post: 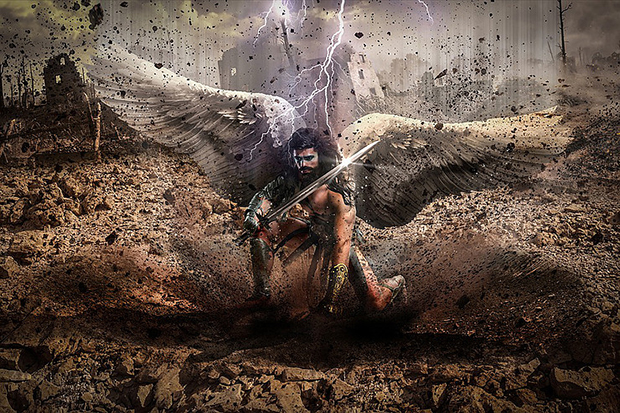 I received a call for HIS people to NOT GIVE UP, but to STAND UP for truth, righteousness and justice! Don’t be conditioned to believe that it is too late for the people of faith, and that we should surrender to what is coming! NO! Rise up against the demonic influences and wickedness that has come upon the land! There was war in heaven, now it is here on earth!!

17 And the dragon was enraged with the woman, and he went to make war with the rest of her offspring, who keep the commandments of God and have the testimony of Jesus Christ. (Revelation 12:17 NKJV)

He who overcomes shall inherit all things, and I will be his God and he shall be My son. (Revelation 21:7)

Fight the good fight of faith, lay hold on eternal life, to which you were also called and have confessed the good confession in the presence of many witnesses. (1 Timothy 6:12)

“Where are the Esthers? Where are the Mordecais? Esther fasted and prayed for her people. Mordecai stood up against Haman at the gates and would not bow or compromise. (Read the Book of Esther)

The ‘spirit of Haman’ is upon the land. It threatens to wipe away even the idea of GOD. My people need to STAND UP and be counted worthy of protecting MY NAME.

PRAY for the ‘Hamans.’ Pray for their plans to be thwarted and hindered. Their plots are strong and thick, like a wall of iron. However, with prayer all things are possible……and what seems impossible can come forth and smash the wall! (Matthew 19:26)

Let go of complacency and actively pursue the engaging of godly and spiritual warfare. I call to all who will listen, and say to you, get off your sofas and get on bended knee! Cry out for justice, repentance, truth, and I will bring down fire from heaven to purify what once was unholy and putrid before MY nostrils.

Everything hinges on the prayers of MY saints! Through repentance, nations have been turned around. Do not give up hope and listen to lies that all is lost! As the enemy comes in like a flood, I come and raise up a standard against it, so it will not prosper.

Oh, MY children, I have not left or forsaken you, but I apply the pressure (trials) upon you, so you will return to ME with ALL OF YOUR HEARTS! Cry out to ME on behalf of your nation, on behalf of your people with faith! Declare a fast and turn as many as you can back to ME.

Do not give up so easily! Strive to keep what you have and not let it be taken from you so easily! Never surrender your faith or give the devil a foothold! Do not take the easy way out and give up! Cowards will not see the light of MY day that is coming. (Revelations 21:8) Stand strong and be like a bulwark in the middle of the flood!

Do not cower, do not faint. In your weakness, I will be strong, if you surrender to ME alone! (2 Corinthians 12:9)

Pray away the ‘spirit of Haman’ from the land! Push back the darkness with MY light, My children! This is your job for ME — to bring light in the midst of darkness — not putting it under a bushel! (Matthew 5:14-16)

As I wake up the people with judgments, I am raising them up to be MY army of witnesses! With judgment comes righteousness.

Get the message out: I need MY Esthers and Mordecais to come forth now!”

YAHUAH is His Name and YAHUSHA that came in His Father , YAHUAH’S Name … John 5:43 / Psalm 68:4 is calling us out to protect His Covenant the 10 Commandments / The Testimony of YAHUSHA and to walk in obedience even unto death for our Master YAHUSHA our Messiah is indeed calling us to Stand in Protection of our Marriage Covenant on Mount Sinai and to also walk in the New Covenant Sealed by the Blood of our Precious Mashiach , YAHUSAH . We are being fed Meat now and walking away from the Great Whore / The Beast System / Rome / and her daughter’s / World Church Denominations … into the Keeping of YAHUAH’S 10 Commandments / His Marriage Covenant with us that we are still to keep and obey the Laws , Statutes of YAHUAH . Our Being Saved is coming from our Belief in YAHUSAH’S Blood Atonement Alone although those who have right to enter That City and to Reach up and Take of the Tree of Life are those keeping YAHUAH’S Commandments and Laws except animal sacrifice and the ordinances surrounding the Levitical Priest Hood as they have been done away with the Priest Hood of our Mashiach / Melchizedik Priest Hood our High Priest that stands before our Father YAHUAH making intercession for the Called Out Ones of YAHUAH . Much Love , Heather . So glad you are starting to wake up . YAHUAH we come together in the Mighty Name of Your Holy Brought Forth Son From Your Bosom and ask that You will lead us and Guide us as the Body of YAHUSAH to serve You with One Mind and One Accord being led by Your Holy Ruach / Your Set Apart Spirit oh Mighty YAHUAH our ALOAH.

2nd Timothy 2:3-4 Endure hardship with us like a good soldier of Christ Jesus. No one serving as a soldier gets involved in civilian affairs – he wants to please his commanding officer. 2nd Corinthians 10:3-4 For though we walk in the flesh, we do not war after the flesh: for the weapons of our warfare are not carnal, but mighty through God to the pulling down of strong holds. Ephesians 6:12 for we wrestle not against flesh and blood, but against principalities, against powers, against rulers of the darkness of this world, against spiritual wickedness in high places.

Last night Jesus appeared to me in a dream! He said “I want you to lead 45 people to Jesus. We will start here!” This is a small assignment! I
Have faith that God/Jesus/The Holy Spirit will direct my footsteps and show me what to do every step of the way.

I have had health challenges. I am sleeping on my couch so this word really speaks to me. My grandmas name was Esther. She was a Methodist preachers wife. With God/Jesus/The Holy Spirit I will complete this assignment. Please pray that Gods perfect will is done and that these 45 people accept Jesus as their Lord and savior. God bless you all.

Thank you dear Elizabeth for sharing this word. It is indeed time to take a stand and lift up the person and work of Jesus. We alone as true believers have the words of eternal life. There is no other way to the Father. We are his witnesses. It is time to arise in the power of the Holy Spirit and in his holy boldness and proclaim Jesus to a lost and dying world that sits in darkness. He is a good God and he has provided all that is needed for us to stand in this time of great darkness. He is our strength and our portion and our very present help in time of trouble. We shall not fear what man can do to us but we shall fear the living God and seek to please him in all things.

My grandma’s name was Esther! She was a preachers wife.

Just to share in the name department, mine is a 2-word first name, hyphenated and named after both grandmothers – one from OH and the other from FL… my first name is Carrie-Esther. Can you imagine the joy I felt reading Esther in the Bible when I came to Christ? Folks Always try to call me Carrie but I share that they are dissing Esther!

Hello Carrie-Esther! Glad to see you here. I won’t forget your name!