People appear to die at rates 20% or more above normal for weeks after receiving their second COVID vaccine dose, according to data from a huge Swedish study.

The figures are buried in a preprint paper on vaccine effectiveness released last month. The headline finding of the paper was that protection against COVID, including severe cases, plunged after six months.

The researchers did not explicitly examine deaths from all causes — which have risen since the summer in many countries that have highly vaccinated populations.

But on page 32 of the 34-page report, a chart shows that 3,939 of 4.03 million Swedes who received the second dose died less than two weeks later.

Over a one-year period, that rate of death would translate into an annual mortality rate of about 2.5% a year — 1 person in 40 — almost three times the overall Swedish average. In a typical year, about 1 in 115 Swedes dies.

Of course, that huge gap does not account for an important confounding factor: younger people, who have a much lower risk of death, were less likely to be vaccinated.

That data shows that from an average of about 1,650 Swedes died every week between 2015 and 2019 between April 1 and early August, the period in which almost all of those 4 million Swedes in the study received their second dose. Death rates hardly varied over those years.

In other words, during the spring and summer, Sweden normally has about 3,300 deaths every two weeks — not just in the people who received vaccines, but in all 10.6 million of its people.

So let’s make an incredibly conservative assumption, one that strongly favors the vaccines. (The next couple paragraphs are a bit tricky, but I hope the payoff is worth taking the time to read and think through them.)

Assume that the group of people who received vaccines were so much older and unhealthier than those who didn’t that they would have accounted for every single death in Sweden whether or not they were vaccinated. In other words, assume that even if the vaccines did not exist, every person in Sweden who died would have been part of that group of 4.03 million people the researchers tracked — while not one other person would have died.

In that case, those 4.03 million people “should” have about 3,300 deaths every two weeks. They CANNOT HAVE MORE — because all of Sweden does not have more.

But the vaccines do exist. Those 4.03 million people received them. And in the two weeks after receiving the second vaccine dose, as a group, the researchers reported they had not about 3,300 deaths, but 3,939.

And 3,939 deaths is about 20% more deaths than “should” have occurred in those two post-vaccine weeks. Again, the 20% figure understates the real gap, because in the real world some deaths will occur in the 6.6 million unvaccinated people too, so the actual baseline number for the vaccinated group is not 3,300 deaths but somewhat lower.

Unfortunately, the researchers did not report any details on the deaths, so it is impossible to know if they are disproportionately cardiovascular.

It is also impossible to know whether one particular vaccine was disproportionately linked to deaths. (Sweden used mostly the Pfizer mRNA vaccine, as well as some of AstraZeneca’s DNA/AAV vaccine, which is not available in the U.S., and a small amount of Moderna’s mRNA vaccine.)

Of course, it is just possible the extra deaths are due to chance.

Or that the handful of elderly Swedes who received vaccines in February and March accounted for a hugely disproportionate number of the post-vaccine deaths. (Because per-week Swedish death rates are higher in the winter, a large number of post-vaccine deaths in those months would somewhat reduce the strength of the signal, though it would still exist.)

They are yet another piece of evidence in an increasingly worrying picture — alongside case and anecdotal reports, a known link to heart inflammation in young men, the updated Pfizer clinical trial data revealing a numerical imbalance in deaths in vaccinated people and most importantly the general rise in all-cause mortality in many countries.

And all of these red flags come for vaccines that — if the Swedish data are correct — may actually raise the risk of COVID infection after about eight months.

See how that black line drops below the zero level on the top chart? That represents negative effectiveness, which is another way to say people who are vaccinated are MORE likely to be infected than those who aren’t.

And, as the second chart shows, effectiveness against severe COVID infection is also spiraling towards zero. 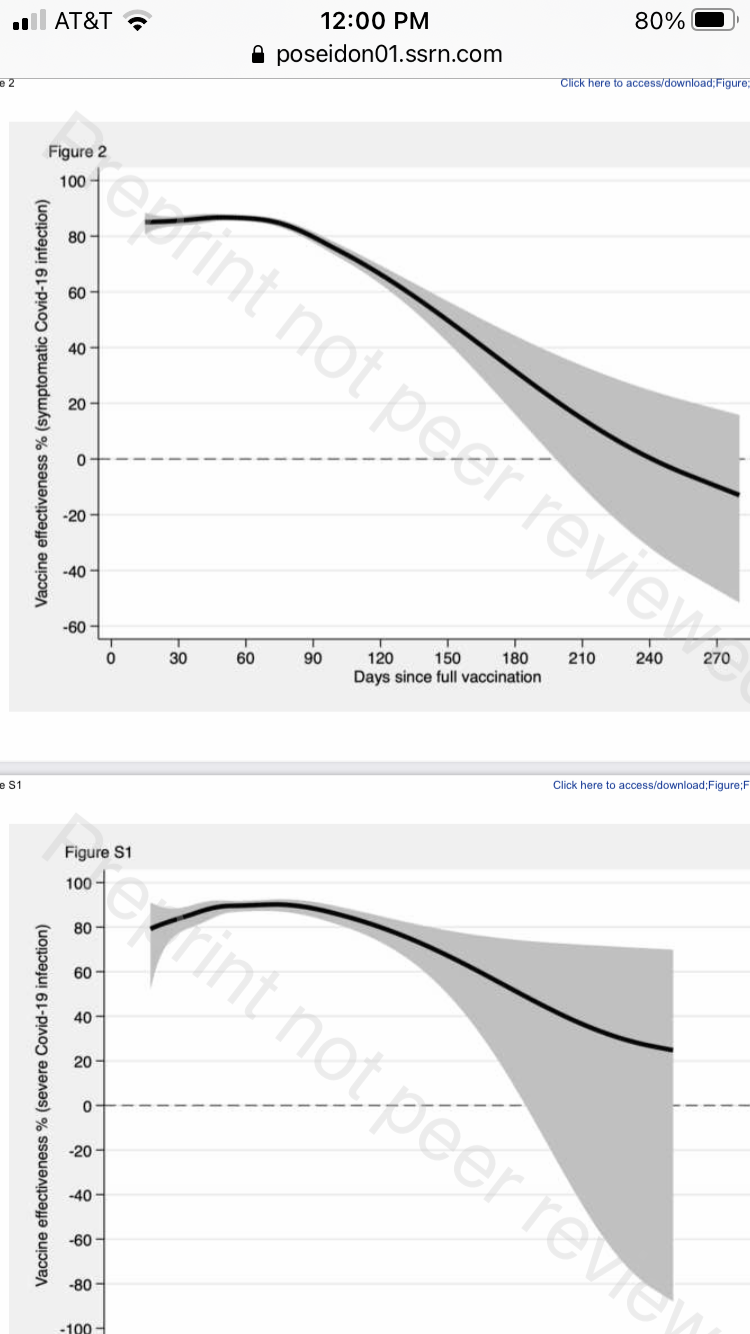 Originally published at Unreported Truths by Alex Berenson and republished by Childrenshealthdefense.org.