The Pentagon, working together with the Anti-Defamation League, issued new rules on Monday to further suppress the First Amendment rights of American service members.

Whereas no one was punished for drone-striking a bunch of innocent children and killing an entire family in Afghanistan back in August, Defense Secretary Lloyd Austin is threatening to punish troops and hold them “accountable” for “liking” so-called “extremist” views on social media.

Austin this month also “reprimanded” over 2,700 troops and dismissed 103 Marines for refusing to comply with the regime’s “vaccine” mandate.

From the AP, “Pentagon issues rules aimed at stopping rise of extremism”:

Warning that extremism in the ranks is increasing, Pentagon officials issued detailed new rules Monday prohibiting service members from actively engaging in extremist activities. The new guidelines come nearly a year after some current and former service members participated in the riot at the U.S. Capitol, triggering a broad department review.

According to the Pentagon, fewer than 100 military members are known to have been involved in substantiated cases of extremist activity in the past year. But they warn that the number may grow given recent spikes in domestic violent extremism, particularly among veterans.

In other words, this is a non-issue they’re merely using as an excuse to conduct an ideological purge of the military.

The new policy lays out in detail the banned activities, which range from advocating terrorism or supporting the overthrow of the government to fundraising or rallying on behalf of an extremist group or “liking” or reposting extremist views on social media. The rules also specify that commanders must determine two things in order for someone to be held accountable: that the action was an extremist activity, as defined in the rules, and that the service member “actively participated” in that prohibited activity.

[…] The military has long been aware of small numbers of white supremacists and other extremists among the troops. But Defense Secretary Lloyd Austin and other leaders launched a broader campaign to root out extremism in the force after it became clear that military veterans and some current service members were present at the Jan. 6 insurrection.

In a message to the force on Monday, Austin said the department believes that only a few service members violate their oath and participate in extremist activities. But, he added, “even the actions of a few can have an outsized impact on unit cohesion, morale and readiness – and the physical harm some of these activities can engender can undermine the safety of our people.”

[…] The new rules do not provide a list of extremist organizations. Instead, it is up to commanders to determine if a service member is actively conducting extremist activities based on the definitions, rather than on a list of groups that may be constantly changing, officials said.

Just like with Big Tech censorship, they’re purposefully keeping the rules vague so they can punish anyone who doesn’t tow the line.

Asked whether troops can simply be members of an extremist organization, officials said the rules effectively prohibit membership in any meaningful way — such as the payment of dues or other actions that could be considered “active participation.”

Pentagon spokesman John Kirby told reporters that “there’s not a whole lot about membership in a group that you’re going to be able to get away with.” He added, “In order to prove your membership you’re probably going to run afoul of one of these criteria.”

Kirby also said that commanders will evaluate each case individually, so simply clicking “like” on one social media post, for example, might not merit punishment depending on all the circumstances involved.

He also noted that the Pentagon does not have the ability or desire to actively monitor troops’ personal social media accounts. Those issues would likely come up if reported to commanders or were discovered through other means.

The Pentagon partnered with Google-funded “Moonshot CVE,” who works together with the ADL, to spy on members of the military earlier this year as part of this investigation into “extremism.”

They said that searching for phrases such as “the truth about black lives matter” was a sign of “extremism.”

Their purposefully vague definition of “extremist activities” which merit punishment is defined as anything which “calls into question the individual’s ability to follow orders from, or effectively lead and serve with, persons of diverse backgrounds,” which they insist prevents “maximum utilization and development of the Department’s most valuable asset: its people.”

They further claim that “active participation” in any “extremist activities” is “prohibited” as it “undermines morale and reduces combat readiness.” 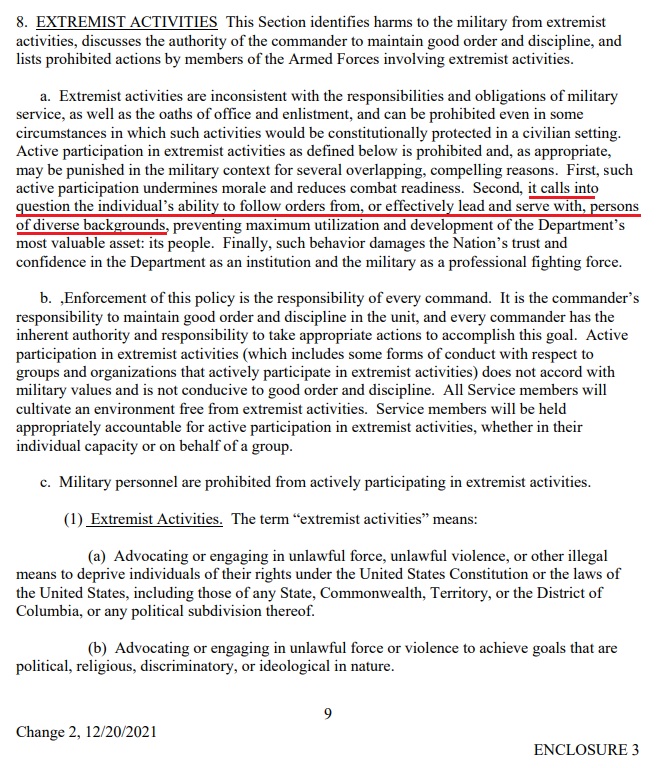 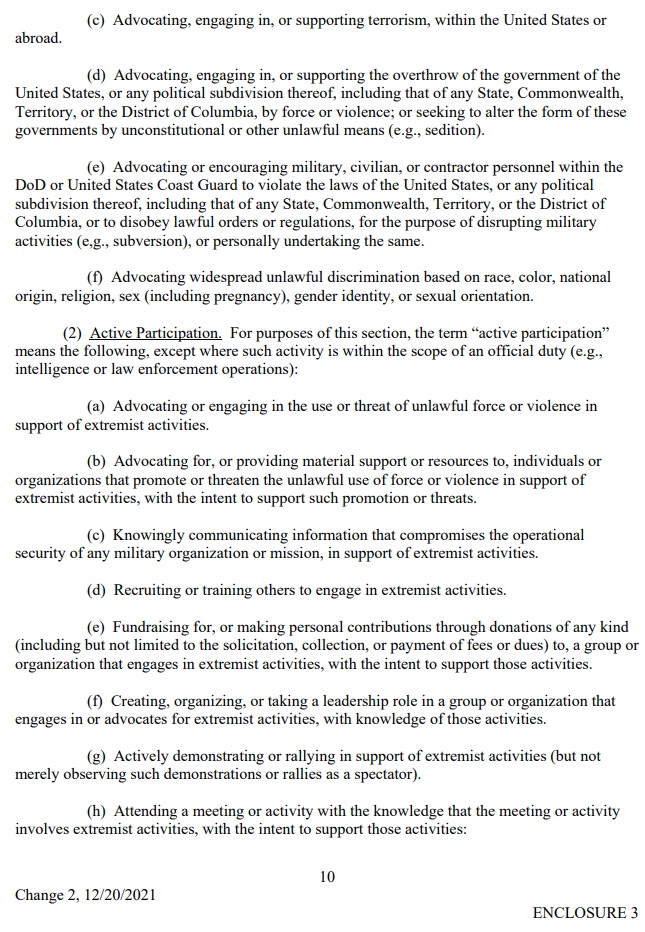 The part prohibiting criminal gang activities is less than half the size of the section prohibiting “extremism” and was clearly just tacked on to make their outrageous actions seem less extreme.

The rules say that “advocacy” for “extremist activities” can even include “nonverbal communication.” 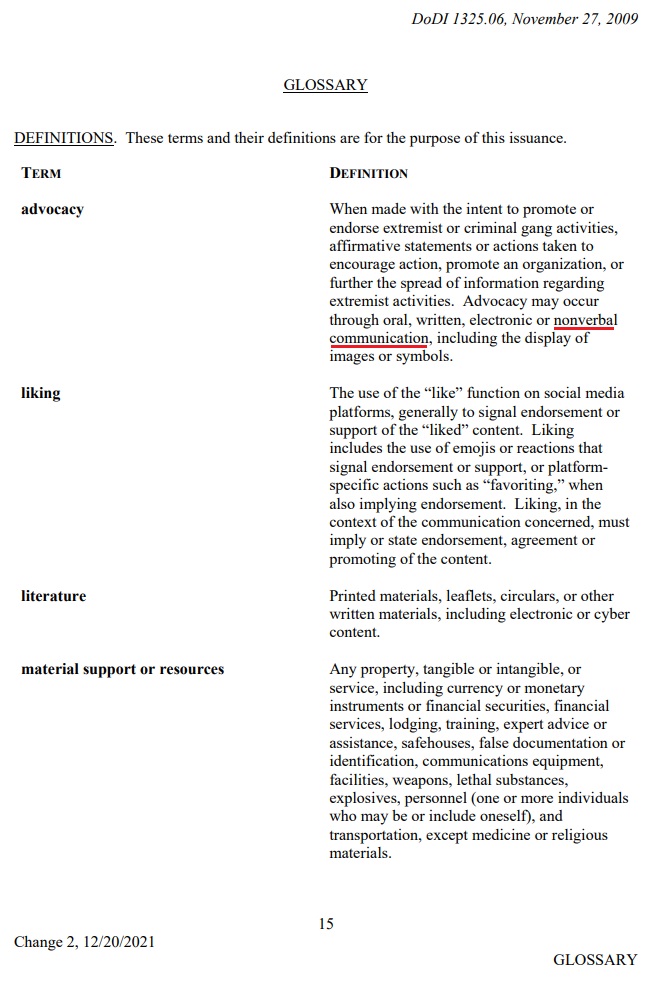 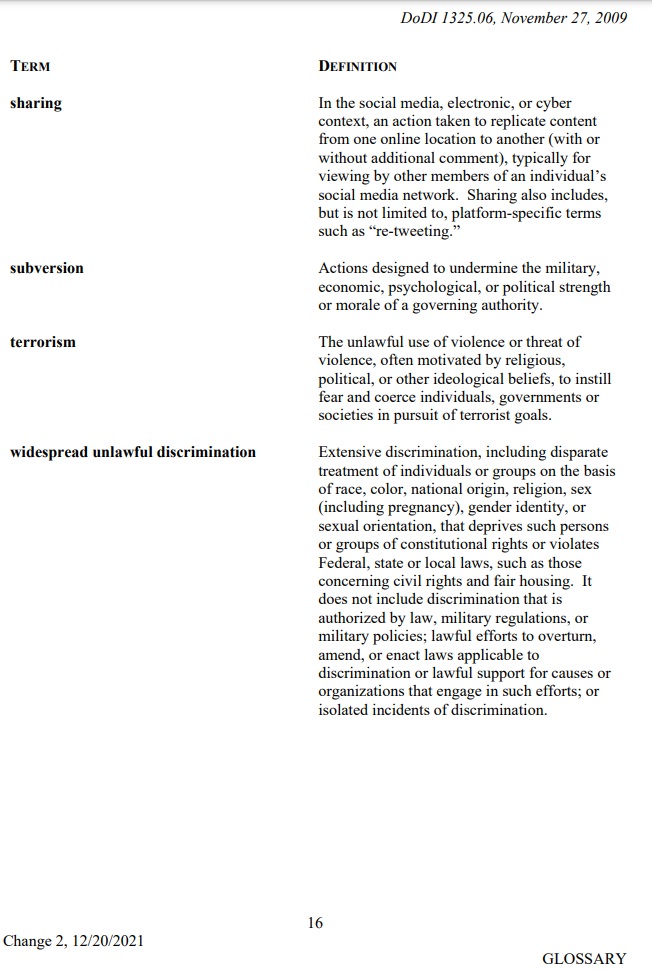 The ADL is effectively now running our military.