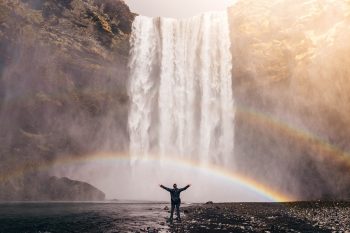 In 2016, I had two visions. I believe the visions I had in 2016 will be part of the upcoming outpouring as the Holy Spirit. The visions I received were as follows:

The first vision I received was the image of a race and there were runners lined up at the starting line. There was a wide rubber type barrier that ran across the track keeping the runners from moving forward. The runners represented the Bride of Christ. The runners were in their starting positions ready to run as soon as the barrier was removed. Once the barrier was removed, there was a rush forward by the runners. But as they rushed forward, healing, restoration, and blessings attached themselves to the runners so that all manner of sickness, and oppression fell off and the runners were running their race without any hindrances.

The next vision I received when praying about healing was a massive waterfall in the spirit. The waterfall extended as far as my eyes could see. Below me was a floor, similar to a warehouse floor. The floor had a large steel door that was closed. There was a man standing next to the door with his hands on the handle ready to open it. I could tell that when it opens, the water from the waterfall will rush through the steel door into the earth realm. The rushing water is for the Bride. In the waters is healing, restoration, and blessings.

The two visions represent a massive outpouring of the Holy Spirit onto the Bride. The outpouring will bring the long awaited healing, restoration, restitution, and blessings that we have been earnestly praying and waiting for. There is a timing element for this outpouring from the Lord but the time is very soon as indicated by the runners in their starting positions and the man primed to open the steel door. Hopefully this post will bring encouragement to those who are praying and staying in faith. As the word says, “And let us not grow weary while doing good, for in due season we shall reap if we do not lose heart.”(Galatians 6:9)

I also believe a greater anointing will come upon the Bride (remnant) during this time. It will be needed as the Bride advances the Kingdom and as our world is becoming darker. The light shines the brightest when it is the darkest. The outpouring of the Holy Spirit onto the Bride will give us what we need to be the light of the world.

S. Renee Felder has been walking with the Lord for almost 30 years and has over 30 years’ experience as a professional tax accountant and over 20 years as a financial accountant. She has also taught accounting and finance to undergraduate and MBA students. She often receives prophetic insights into financial markets. She has written a book which can be found on Amazon titled ‘The Bridge, Moving from Increasing Chaos to Future Peace’ which is about a revelation the Lord gave her showing how bank failures will be one of the catalysts for the collapse of the U.S. and global economies. Strategies on how to prepare for what is coming are also included.

Thank you sister for sharing! This spoke to my spirit! I have so been praying in anticipation of His glory and power to come upon the Saints! Very encouraging! blessings!

I just read this morning in Ezekiel 47 especially verse 9; everything shall live wherever the water goes. These waters pour forth from the temple
And then I see this to go with it. Hallelujah

Heard the exact scripture from Galatians this morning. Much appreciated!

The door part has resonated with me as I very rarely remember my dreams but a couple of nights ago I was distinctly told in a semi-sleep state, just before waking ‘the door is open‘. That’s all there was and every hour of my waking day this sentence pops in my head and I know it’s important as I never remember anything really and definitely not after a few hours.

Thank you for the confirmation!

Thank you Renee, this message really blessed me and I believe everyone who is reading. I’m really in waiting mode for what God is about to do and how it sets us completely free and makes us able to advance His kingdom in new greater ways.