You are here: Home » News » Jesuit Schemes by Nation » Canada » Ottawa Police to Seize Food And Fuel From Peaceful Protesters to Starve And Freeze Them Out 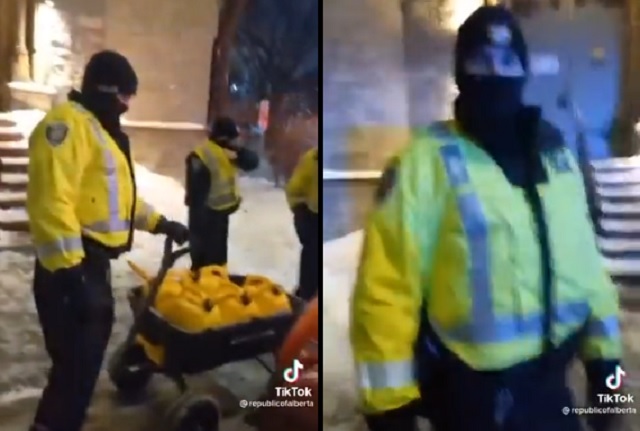 Ottawa police on Sunday announced new plans to starve and freeze protesters and their families by denying them food and fuel supplies in the dead of winter.

“Ottawa police issued more than 100 tickets Sunday and arrested seven people as the force unveiled plans to prevent people from supplying the protesters in the downtown with gas, food and other ‘material supports,’ ” state media outlet CBC reported.

The Ottawa Police Service (OPS) announced the new tactic in a tweet Sunday afternoon, as the protest against COVID-19 public health measures in the city’s parliamentary precinct — a protest several political leaders have called an occupation — continues for a second weekend.

Anyone who brings in those supplies could be arrested, OPS said.

Confirmed: The Police Are Seizing Fuel in Ottawa

The Ottawa police are seizing fuel, trying to run the truckers out of fuel.
This is also a large presence of tow trucks. pic.twitter.com/HMLMDVp3e8

For their part, the truckers are unmoved.

There are tons more protesters than there are police and they’ve been nothing but peaceful in their bid to get the government to end its criminally idiotic vaccine mandates.

Rather than concede to their simple request and drop the mandates in accordance with the will of the majority of Canadians, Trudeau and his cronies are choosing to escalate tensions.