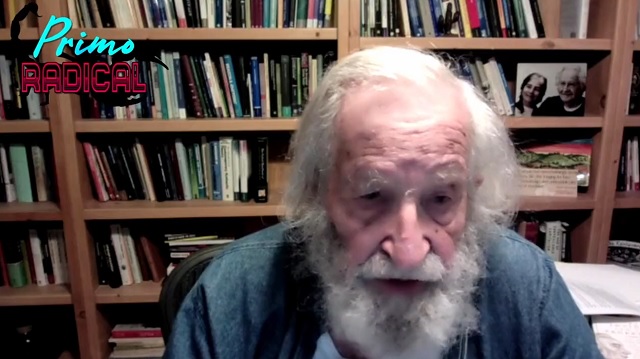 Leftist intellectual Noam Chomsky in a recent interview endorsed segregating the unvaccinated from society and denying them food in a neo-Bolshevik Holodomor 2.0 strategy to starve them into submission.

“Such people have to be– they should have the decency to remove themselves from the community, if they refuse to do that, then measures have to be taken to safeguard the community from them,” Chomsky told the Primo Radical YouTube show over the weekend. “Then comes the practical question that you asked: How can we get food to them? Well, that’s actually their problem.”

“Of course, if they really become destitute then yes you have to move in with some measure to secure their survival, just as you do with people in jail,” Chomsky said.

Noam Chomsky doubles down on his previous call for the state to segregate The Unvaccinated from society:

“How can we get food to them? Well, that’s actually their problem.”

At that point, it’s not the people’s problem, it God’s “problem” and God will provide for His people who trust in Him. Don’t be afraid. God will command the birds to feed you and the rocks to give water for you.

I know he is a popular leftist in the US and in the past, in spite of his ideological leanings, I have heard him speak quite intelligently on a range of topics.
But for him to characterize those that wont vax like this makes me think he really and truly believes in vax (still). Which means he is probably Johnny on the spot getting every mandated booster. Not good for him