Not everyone’s following the Jesuit script regarding their fake epidemic, and oh how they hate that.

As a sovereign nation, Nicaragua exercised their right to defy the Jesuit demands for mask mandates and lockdowns and handle the threat of COVID-19 their own way. Nicaraguan President Daniel Ortega gave his people the freedom to choose whether or not they wanted to wear a mask or stay home to quarantine themselves. He immediately came under attack by foreign publications with some even accusing him of human rights abuses.

By contrast, neighboring countries of El Salvador and Honduras enforced strict mandates requiring masks and lockdowns. In El Salvador, the lockdown was enforced by gangs carrying baseball bats. In Honduras, a national curfew was mandated and strictly enforced, suspending Constitutional liberties, and arresting over 34,000 people for violating the curfew. Over 210 complaints of torture or cruel treatment were reported to a local agency including police beating people, shooting people and using tear gas, as shown in these excerpts from the U.S. State Department report.

In response to the COVID-19 pandemic, the government instituted a national curfew, suspending constitutional provisions and limiting the free movement of individuals. Peace Brigades International (PBI) reported more than 34,000 persons were detained for violating the curfew. The Human Rights Board condemned some of these arrests as arbitrary under the guise of curfew enforcement.

The quasi-governmental National Committee for the Prevention of Torture, Cruel, Inhuman, or Degrading Treatment (CONAPREV) received 210 complaints of the use of torture or cruel and inhuman treatment, many related to the enforcement of the national curfew during the COVID-19 pandemic. COFADEH reported police beat and smeared a tear gas-covered cloth on the face of an individual detained for violating the national curfew in April in El Paraiso.

The oppressive tactics used in both El Salvador and Honduras reveal what kind of spirit is operating there. It is not the Spirit of God because the Bible reveals that “where the spirit of the Lord is, there is liberty”. (2 Corinthians 3:17) So the opposite is also true, where the spirit of the Lord is not allowed to have His way, the people are deprived of liberty and oppressed. This is the spirit of antichrist, which is now seeking to control and oppress the whole world and this orchestrated deadly fear-driven scheme is part of that plan. 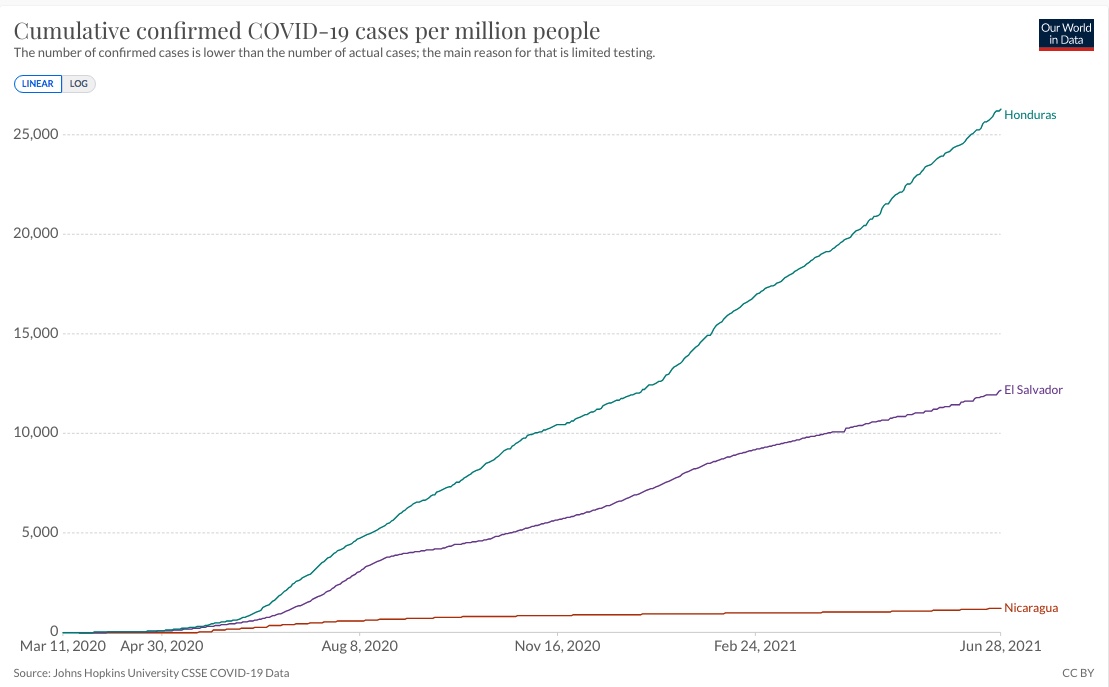 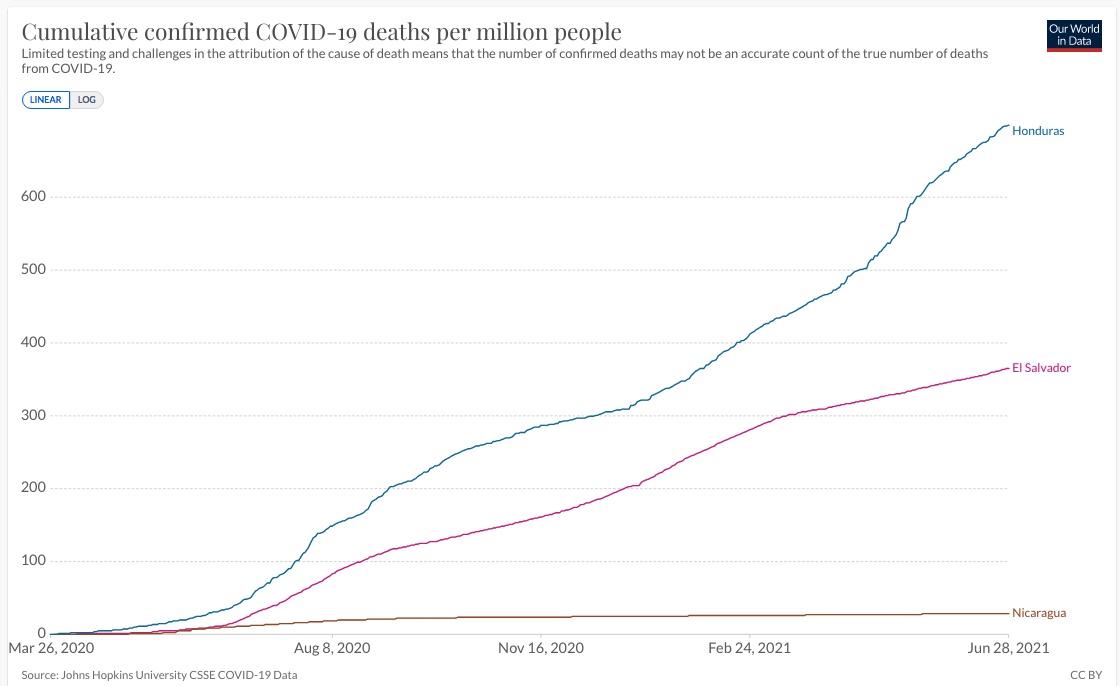 I believe these results are more evidence that the mandates were just a powerful delusion which deceived most of the world, including many Christians. Masks are not helpful in stopping the spread of any viruses and can actually make it worse. Even NIAID Director Tony Fauci has been caught saying this on video and in his emails, oops! Many doctors and top immunologists have revealed that lockdowns actually make it harder to stop the spread of the virus because they prevent our God-given immune system from building up immunities, which only comes by being exposed to antigens, including the COVID-19 virus, not by staying home locked up in quarantine. This is a scientific fact taught in entry-level college Immunology 101.

For their courage in standing up to the global cabal and their great success in stopping COVID-19, Nicaragua should be applauded as an example for the rest of the world to follow, but instead, they have made themselves a target for the Jesuit controlled CIA, which is now using terrorism and violent actions to destabilize the nation.

If you’re not familiar with the Jesuit control over the US government, please see my previous post, It’s Time to Get a Biblical Perspective of What’s Really Happening in the World.

Our federal government has also launched a campaign to daily flood the Nicaraguan news media with slanderous lies about current Nicaraguan government leaders. The campaign relies on bribing journalists, political analysts and independent writers with funding coming through illegal money laundering through a host of corrupt US government agencies operating under cover as humanitarian services. According to Nicaraguan investigative journalist Carlos Fonseca Terán, these agencies include “USAID and NED, but also others like the Soros foundations, and also European agencies such as OXFAM”.

While the American people have been distracted by a never ending deluge of movies, social media, sports, prescription drugs, alcohol and illegal drugs, our Jesuit controlled government has been secretly advancing evil schemes like this all over the world with almost zero opposition. Even before COVID-19, Nicaragua endured previous attacks from US military and CIA paramilitary forces during the Contra Wars (1981-1990), in which tens of thousands were killed, and also a failed coup attempt in 2018, in which over 200 people were murdered, most of them after being kidnapped and tortured. But by the grace of God and strong resistance from the Nicaraguan people, the coup failed after just three months.

President Ortega has been in office since 2007. Although he successfully led his nation to victory against the COVID-19 threat, his defiance of the Jesuit scripted narrative has likely moved him up near the top of the list of high priority targets to be taken out. And they’ll have an opportunity to do that in the upcoming national election scheduled for November 7, 2021. My guess is he’s already preparing for that possibility.