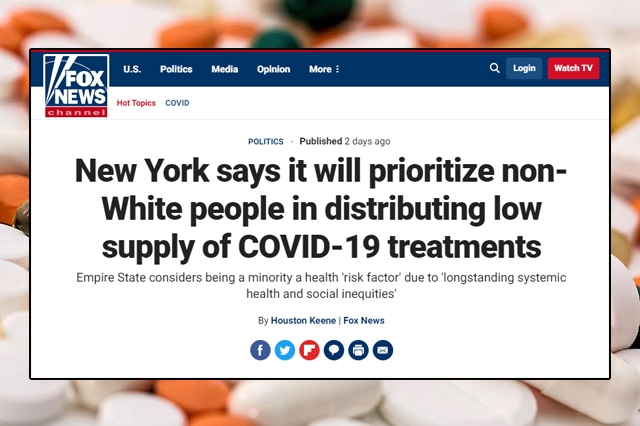 The state of New York said it will prioritize non-White people in the distribution of COVID-19 treatments in short supply.

New York’s Department of Health released a document detailing its plan to distribute the treatments, such as monoclonal antibody treatment and antiviral pills.

The plan includes a section on eligibility for the scarce antiviral pills that people must meet to receive the treatment, including a line stating a person needs to have “a medical condition or other factors that increase their risk for severe illness.”

“Non-white race or Hispanic/Latino ethnicity should be considered a risk factor, as longstanding systemic health and social inequities have contributed to an increased risk of severe illness and death from COVID-19,” the memo reads.

The group that pays the majority of the taxes is being denied all benefits. Is that not taxation without representation? Why should we pay into such a system?