Most of us remember the countless stories of babies stolen from hospital nurseries. Some were kidnapped by a psycho nurse or some serial lunatic desperate for someone else’s child. One of the first cases happened in 1964 in Chicago, when a 1-day old newborn male baby was kidnapped from the hospital. According to the National Center for Exploited and Missing Children, “the total abductions of infants related to healthcare confirmed by NCMEC from 1964- November 2020, in the USA was 329.” I honestly think this number is much larger than originally reported.

But now in our society, some hospitals are refusing to release a newborn baby from the NICU to the parent(s) if unvaxxed. How mind manipulating can this be? The world we once knew has dramatically changed. Almost every day there is a new law and/or set of rules being mandated. Most of these laws the general public doesn’t even know about.

“New Forced Control: NYU Langone and other Hospitals in New York and Long Island are Forcing that if the Parent is not VAXXED they will not release Babies from NICU to Parents or after birth as per CDC Guidelines. You Need to Show VAX-Passport to see your own New Born Baby.”

The spirit of the AntiChrist is ever present and working meticulously all around us. Let us pray for the expecting mothers who will ultimately be faced with this kind of decision. Whether in New York or any other states that may try to evoke this. Hospitals are a more modern way of giving birth but many have resorted to alternative methods. There are birthing centers and midwives which are becoming popular.

Do you have statements from actual parents that this has happened to in NY?

Do you have proof of this other than this doctors word? Also, isn’t he located in England not the US?

He works in New York City. However the “fact checkers” put out a news article stating that the story wasn’t true. I honestly don’t believe for one second a physician would lie and put his reputation on the line. Especially for someone strongly against the vaccine.

So dividing the population by race, economics and vaxxed/unvaxxed status isn’t enough for them. Now they’re dividing families by separating a newborn from it’s parents. I see a very bad ending to this one. Never underestimate the bond between a mother and her child. Tell me I can’t take my newborn home and you’ll unleash a level of hell you’ve never seen before.

This word confirms what I have felt in the spirit. I believe that along with healing the sick, casting out demons & raising the dead we will also be birthing babies!
My Dad told me that many people in the Philippines are now too afraid to go to hospital. People suffering sickness (not covid related) are going in & sadly not coming out again. A couple in my Dad’s church are pregnant & have decided to have their baby at home. God is so good that His daughters will have short, natural, safe labours & bring forth healthy bubbas. Both of my labours (although at hospital) were very blessed because of God’s goodness & power. Praise Jesus!

do you have sourcing for this? Thanks! 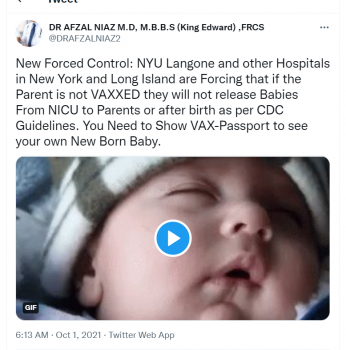 Aren’t babies supposed to BOND with their mothers right after childbirth? How is this supposed to happen when they are keeping mother away from baby? Of course, they want everyone vaccinated, yet is there more to this sinister plot? Truly, we live in The End Days.

BTW – It is being reported (Daily Mail – 10/3/21) that medical staff employed in Louisiana (under Oscher Health System?) MUST have their spouse vaccinated or be fined $200 per month. Nazi German Fourth Reich – we are here…

The baby should be bonding with the mother. Especially a vulnerable newborn coming out of the NICU, this is very critical.

This agenda is getting worse and worse by the day. It is very sickening but sadly many will go along with it.

I wasn’t aware of spouses being mandated as well. This is so over the top and cruel. Thanks for sharing that!