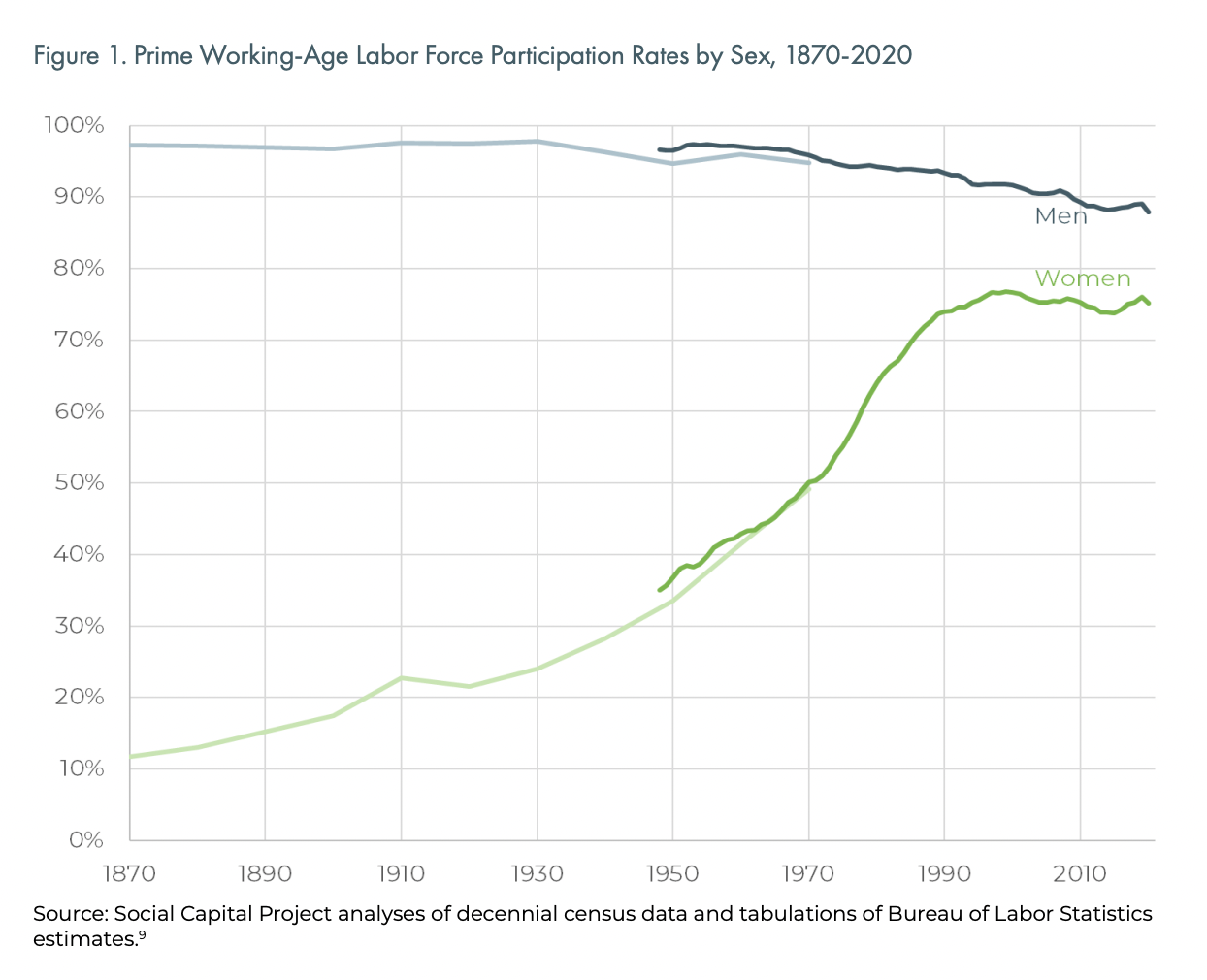 A massive labor shortage continues to grip the nation and hold back our economic recovery. With countless pandemic and policy factors influencing the shortage, there’s a heated debate over what’s keeping so many workers out of the labor force. But a new study confirms that the growth of the welfare state is playing a massive role—and that this trend began long before the pandemic.

Published by experts on the Republican side of the Senate Joint Economic Committee, the analysis reports, “the U.S. has witnessed an unprecedented rise in disconnected prime-age workers over time.” As shown in the graph below, the men’s labor force participation rate has fallen from more than 97 percent in 1955 to 89 percent prior to the pandemic, while the women’s labor force participation rate has declined in recent decades as well.

What’s causing this decline? Well, the study examines popular explanations like displacement from immigration and technological advancements and finds that they do not account for this drastic drop. Rather, it suggests that the biggest factor is that “many would-be workers are voluntarily disconnected from work, and government programs and policies have likely made work less attractive for these Americans.”

There has been tremendous growth in the welfare state over these decades. Per the committee, in 1998 about 20 percent of working-age Americans living in households between the 20th and 50th income percentiles were benefiting from government programs. As of 2014, that figure was up to 30 percent.

Indeed the study notes that “only 12 percent of inactive, prime-age, able-bodied men said they wanted a job or were open to work.” Why? It doesn’t take a genius to figure out that the widespread availability of robust welfare benefits is a key part of the explanation.

“A significant body of empirical evidence suggests that government transfers— especially those without work requirements—tend to lower employment,” the study reports. “For example, labor force participation and earnings fall after receiving housing assistance, losing Medicaid coverage increases employment and gaining the coverage can reduce it, and the introduction of the food stamp program in the 1960s and 1970s decreased employment significantly.”

We can’t overlook these troubling findings. Yes, there’s no doubt that the pandemic and pandemic-specific policies are contributing to the particularly acute labor shortage currently facing our economy. But in the bigger picture, our long-term labor problems are driven particularly by a bloated welfare system that disincentives work and traps people in poverty.

Yet some are learning the opposite lessons. With their $3.5+ trillion spending plan, progressives in Congress are trying to make the welfare state even bigger! This is bad for the economy and actually bad for the supposed beneficiaries, too—the anti-poverty, mental, emotional, health, and social benefits of being employed are widely and extensively documented. Policies should incentivize employment; not discourage it.

“As the number of Americans who receive government assistance has grown, more Americans have voluntarily left their jobs,” Republican Senator Mike Lee commented in light of this report. “Congress’ plan to spend an additional $3.5 trillion to provide households with new subsidies and fewer incentives to work would only make things worse.”

Indeed it would. Hopefully, this new study injects some much-needed insight into the ongoing conversation about labor shortages. In the big picture, our labor participation problems can’t be fixed without serious rollbacks of the welfare state.