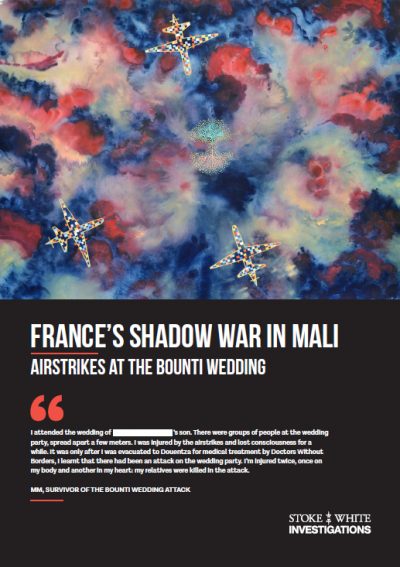 Stoke White Investigations has examined the reported killing of civilians in a French air strike on a wedding party in Mail in January 2021. The following is adapted from the report’s Executive Summary. The full report can be viewed here.

On 3 January 2021, France undertook 3 airstrikes as part of its Operation Barkhane mission in Bounti, central Mali. France claimed it had attacked an armed “terrorist group”, but locals reported that a wedding party had been attacked. A subsequent UN report into the strikes  – the first investigating France’s military activities in Mali – concluded that a wedding was indeed taking place, and that 19 civilians had been killed.

What exactly happened on the Sunday afternoon is disputed by the various parties of this civilian casualty allegation, but by the evening of the attack, a local social organisation, the AES Corporation, had already notified its members that a wedding was attacked outside Bounti, killing civilians.  Two days later, French forces told the AFP that its military aircrafts had “neutralised” dozens of fighters in central Mali and that reports of an attack on a wedding “do not match the observations that were made”.

French Armed Forces reported on January 7 that they had targeted members of Katiba Serma, an armed group, loosely connected with Al-Qaeda after they had conducted a multi-day intelligence, surveillance and reconnaissance (ISR) mission in Douentza, in central Mali’s Mopti region. As part of this, a French Reaper drone had been conducting an ISR mission for one hour when it decided to follow a motorcycle carrying two individuals north of the “NR16” highway.  The motorcycle joined approximately “40 adult men in an isolated area”, one kilometre north of the village of Bounti, in the region of Douentza. The real-time intelligence of the drone had apparently given the French Armed Forces the confidence that it located members of the Katiba Serma.

‘Robustness Of The Targeting Process’

Following the Reaper’s ISR mission, a pair of French Mirage 2000 fighter aircrafts were called in to carry out a “targeted strike at 3:00 pm local time”. The “behaviour of the individuals”, “materials identified” and “cross-checking” led to the launch of three airstrikes located at “30 PWB 4436 83140” [15.223967, -2.586948] in a semi-wooded area. According to the French Armed Forces, the airstrikes resulted in the killing of 30 individuals, and no women or children were killed due to the “analysis of the area before and after the strike, as well as the robustness of the targeting process”. The French were adamant that they had excluded the possibility of “collateral damage”. The Malian Ministry of Defence and Veterans Affairs (MDAC) supported France’s statement that it targeted members of Katiba Serma.

A  Wedding Was Attacked, At Least 100 Attended Says UN

A United Nations Multidimensional Integrated Stabilization Mission in Mali (MINUSMA) investigation, following the airstrikes in Bounti, declared that 22 individuals were killed at the wedding. The UN report found that five members of Katiba Serma were among the guests of the wedding, only one of them was visibly armed. Two of them had left before the airstrikes hit the celebration, while three were killed. The rest of the casualties were civilians.

While France claimed that it had targeted 40 adult men in an isolated area, the UN concluded that a group of at least 100 individuals were attending a wedding. This finding corresponds with testimony gathered by Stoke White Investigations from victims and relatives. The victims were all men, aged between 23 and 71, the majority of whom lived in the Bounti village. Fighters from non-state armed groups rarely gather together in Mali, due to the threat of airstrikes and drone surveillance. The French government responded to the UN report by questioning its validity and methodology.

We believe that it is highly likely that the drone-led airstrikes against the wedding in Bounti have infringed the laws of war by ignoring or failing to comply with the principle of distinction between combatants and civilians, or the principle of proportionality by killing civilians to attain a military advantage.

Both the French armed forces and the Mali government are yet to come clean and provide evidence that the gathering was not a wedding, and secondly that it has “neutralised” members of a terrorist non-state armed group. The burden of proof remains with the attacking force, as the onus is on the one triggering lethal force, not the one on the receiving end, particularly when concerning civilians.

There is no denying that the laws of war and international human rights law is applicable on the 3 January, 2021 attack against the wedding in Bounti. With this in mind, it could only be lawful to target valid military objectives as per International Humanitarian Law. France urgently needs to provide evidence on how it came to the conclusion that the wedding it targeted was, in its perspective, a gathering of members of a non-state armed group.

While it could be argued that members of the armed group joined the wedding and used it as a human shield, it should be noted that France denies that the gathering was a wedding in the first instance. Additionally, at least two of the members of the armed group left the wedding before the attack took place according to testimonies documented by MINUSMA. Thus, making it difficult to enter the realm of legal argument that it was even proportionate to engage.

We believe that the French Armed Forces need to act promptly and conduct an impartial and transparent investigation into the Bounti attack. Ignoring and denying the MINUSMA report, as well as our investigation that it was a wedding that was attacked, creates an environment of mistrust on France’s military activities across the Sahel, let alone in other theatres of conflict such as Syria and Iraq.

Along with the Armed Conflict Location & Event Data Project (ACLED), we received data on 51 fatalities from civilian targeting incidents involving French forces in Mali between 2017 and 2021. Others suggest that at least 43 civilians were killed and five other injured in six separate incidents since 2018 alone.

This demonstrates not  only the underreported nature of the conflict across the Sahel, but also the lack of monitoring of civilian casualties of local and foreign forces.  This is not the first instance of France ignoring civilian casualty allegations. This gap in transparency needs to be addressed. It is reasonable to say that France has a systematic problem in admitting and identifying civilian casualties and / or injuries as a result from its military actions. The denial of the killing of civilians at a wedding in Bounti on 3 January 2021, should be viewed in this light.

This post was originally published by Globalresearch.ca and is shared in accordance with fair use terms for nonprofit educational purposes.