You are here: Home » Prophecies » “In the same way as there will be four natural seasons in 2018 there will also be four distinct spiritual seasons.” 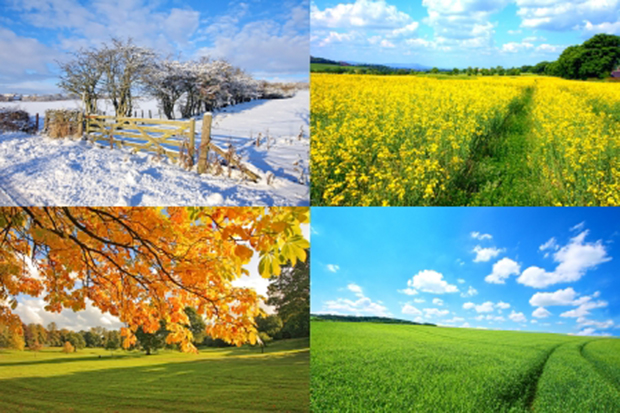 This morning, the angels called me up to the worship room and announced that it was time to praise the Lord and give thanks for Yeshua. As I began to worship, angels began to manifest. There were several healing angels (one for me) and I released them to minister the healing Father God had sent them to minister.

I received it. How about you? They came for you too.

Then I began to receive several visions and had a visit in Heaven. First, I saw something like a lighted square with slightly rounded sides. It was glowing with a light blue light. An “X” in the center divided the square into four equal sections. The Lord said, “In the same way as there will be four natural seasons in 2018 there will also be four distinct spiritual seasons.”

The first season will be a season of judgment. The second a season of great grace. I am still waiting to hear what the other two spiritual seasons will bring.

I believe we need to get into some serious repentance in the closing days before the season of judgment opens. This is more important today than knowing what the other two seasons will bring. I plan to spend these days in repentance as the Lord suggests.

Then He who sat on the throne said, “Behold, I make all things new.” And He said to me, “Write, for these words are true and faithful.” (Revelation 21:5)

Then I was lifted up to Heaven and experienced something very beautiful, which speaks to me of all four seasons in the spiritual realm. I was standing in front of an ancient house made of stone. Ivy had grown up around the house giving it a very old appearance. A powerful light was shining on the house from the back. The light was primarily on the right side of the house, from the perspective of the light. The house seemed to be warming up from the powerful light in order to receive visitors.

Then I became aware that the light was not from the Sun, but from the transfigured Son.

And He was transfigured before them. His face shone like the sun, and His clothes became as white as the light. (Matthew 17:2)

His light is shining to warm up a safe haven for us. This light from the Lord was falling primarily on the right side of the house. The Holy Spirit let me know this was a prophetic word about a powerful authority being released to those who are following Him. I thought about Luke 10:19 and how we have never fully embraced this promise.

“Behold, I give you the authority to trample on serpents and scorpions, and over all the power of the enemy, and nothing shall by any means hurt you.” (Luke 10:19)

The authority being given in these seasons is supposed to be warm and loving – not judging and condemning. We will use this authority to let love draw people to Him this year. Many people will be more receptive to the gospel in these seasons because of the judgment they are experiencing. Others will harden their hearts and be more distant. I saw a great divide happening because of the choices people will make. I heard the Lord saying,

Then the Lord gave me a wonderful vision. I saw a great light from the Lord shining on Egypt. It was driving the darkness away and letting people see the glory of the Lord. This was awesome and I thought about Habakkuk 2:14.

For the earth will be filled with the knowledge of the glory of the Lord, as the waters cover the sea. (Habakkuk 2:14)

Most of us have been praying for this and this is the season of its manifestation. I began to celebrate for those who have had a burden for Egypt to hear and receive the Gospel of the Kingdom. These are the seasons to persevere and never give up. The past seasons have been hard and disappointing, but now is the time of harvest.

Finally, I was shown several places around the world where the Lord is establishing places of refuge and places of anointing and glory. This is the season for us to move to a new level of glory. I remembered the promise in 2 Corinthians 3:18.

But we all, with unveiled face, beholding as in a mirror the glory of the Lord, are being transformed into the same image from glory to glory, just as by the Spirit of the Lord. (2 Corinthians 3:18)

The veil of deception has been dark and deep in the past season, but it is time for the veil to be lifted from the Lord’s people. Don’t focus on the negatives of the past season, but help people to experience the Glory of the Lord in these four new seasons. The Lord is calling us to help prepare the people and to facilitate their experience of His glory. The darker the world; the deeper the deception and the greater the tribulation – the brighter and greater the Glory will appear to the people. Don’t fight the darkness. Let the light of His Glory drive it away. Amen and Amen!

I woke up this morning. with the words, Glory to God going over and over in my mine. it was awesome

I had a dream/word from the Lord recently. The word was, “2017 would be a metaphor for what’s coming in 2018.” That means more good and bad things for 2018, like we had this year. So I wondered about the acknowledgement of the City of Jerusalem as the capital of Israel by Trump in 2017. What would be the metaphor for it in 2018? So I asked the Lord that question before I went to bed last night. The answer was in the form of a picture of me looking at an Apricot Swirl cookie that I recently made. I believe the interpretation will be something sweet that will be caught up in swirls of other things. Sounds like more things that will please God next year involving Israel. We can only speculate what those things might be and in what season they will happen.

This is such great news. I’ve worked with a ministry in Egypt for years but haven’t been there in many years. I sort of work behind the scenes. And I’ve been praying about whether I should go, even as people are begging me to visit. I’ve been seeking God about this, and I think I just received my answer.
I can’t tell you how much this word means to me. Hallelujah Jesus! !!!!! Praise your Name!

Anyone want to go? You’re all welcome this next summer. We’ll be working with a church where miracles and the growth is already amazing. Now I believe that next year will be phenomenal.

Egypt could also represent the world and the unsaved and light breaking through to them.

Thank you for this beautiful Word Pastor Durham! We lit the first candle of Hanukkah tonight. My husband was also an Army Chaplain (now retired).

The first season of judgement could be the war against North Korea.

The second season of grace could be the flooding of the nation with the gospel, food and liberty.

I was thinking about what season we are in this morning too,and I was thinking that judgement was only for a season as in times past,where nations were disciplined. I also was reading about the cup of wrath ps 75.8 that is mixed, the wicked of the earth must drain it and drink the dregs. the dregs the last mixture in the cup.
I have heard prepare for turmoil,but I also have hope that the cup is mixed with mercy.

Yes! Such a good word! Prepare us Lord for the seasons that are to come.

Speaking of choosing. I just read the story of the pastor in Wisconsin who took his own life, the other day, after years of suicide prevention ministry. Many are choosing the demons, instead of Jesus.

I have a question about this suicide ?? How can this be? -how can a servant of the Lord do this ? I dealt with the demons of suicide after my boyfriend killed himself ,and i had to cut him down and try cpr -his demons became my own -THEY REALLY DID- its unimaginable and powerful and intense and wicked-I cut for years -the forces at play there-Its ONLY the Lords mercy why I did not die -the hospital actually said “-next time we are going to let you die” -but that was before I was saved -Jesus DELIVERED me from all the demons -so does that mean this man was involved with some sin for the demonic realm to take over his mind like this ? I thought from my own experience with this that ONCE Jesus sits on the throne of your heart -Thant HE will not allow this kind of possession to take over -AM I WRONG? wow -how important is the deliverance ministry for ministers ? wow – Or is this just a level of warfare that some must overcome as well? YIKES – I suppose this is why we must chase hard after the Lord as to not wander away -again Yikes–this is so sad

The key to our victory is rarely mentioned in American churches today and viciously attacked whenever it is shared, but it is secured by our faithful obedience to God’s commandments because that is what qualifies us to receive God’s promises to the righteous. He is under no obligation to bless the unrighteous, but He is obligated by His own words to bless and protect the righteous from our enemies and deliver us out of all our troubles.