Vaccinated persons suffering from injuries will seek medical attention at a health clinic or at the hospital where he/she was vaccinated. These  individuals will immediately be subjected to a medical diagnosis as well as to a routine RT-PCR test, which will contribute to pushing up the numbers, which are then categorized to the “vaccinated”.

It’s statistics 101. It pertains to “probabilities”. The probability of a vaccinated individual suffering from adverse effects (seeking medical attention) being subject to the PCR-test (in a clinic or a hospital) is much higher than that pertaining to a healthy unvaccinated individual.

Moreover, there is rising trend in vaccine deaths and injuries which the health authorities are anxious to obfuscate.

Ask yourself. What is the cause of this trend among the vaccinated? The SARS-2 Delta Variant or the Killer Vaccine?

The vaccinated person subjected to the flawed RT-PCR test is categorized as “positive” or is diagnosed as a “probable” Covid-19 positive. And the numbers of covid positive cases assigned to the “vaccinated” go fly high.

In turn, in the US, the “certifiers” are instructed to indicate Covid-19 as “the underlying cause of death” “more often than not”. And no autopsy is allowed.

The deaths and injuries resulting from the mRNA vaccine are now being assigned to the “deadly” SARS-2 Delta Variant.
Michel Chossudovsky, August 28, 2021

The following post was written by Rodney Atkinson and originally published by Freenations.net.

“It is the vaccinated not the unvaccinated spreading the mutant variants” (thus confirming Nobel Prize Winner Professor Luc Montagnier’s theory – RA) This is what has happened with numerous other “leaky” (non neutralising) vaccines. The classic example is Marek’s Disease in chickens. I warned the CDC (the USA Centre for Disease Control) of this in April this year. Other scientists warned the CDC  as well“

I have compiled these tables below which set out the cases per million population and the deaths per million population of, firstly, the most vaccinated countries and secondly the least vaccinated countries. The final column in the first table is the date at which the country started vaccinations and after which the majority of all their cases and deaths occurred.Only in Saudi Arabia did the majority of cases occur before the vaccination start date but the cases did start to rise again after that.

To those who would counter that “naturally the worst affected countries would ensure the most vaccinations which is not the same as the vaccinations causing the cases” I would point to the majority of ALL their cases occurring AFTER they started vaccinating – the start date is in the third column.

Most Vaccinated Countries (More than 50%) 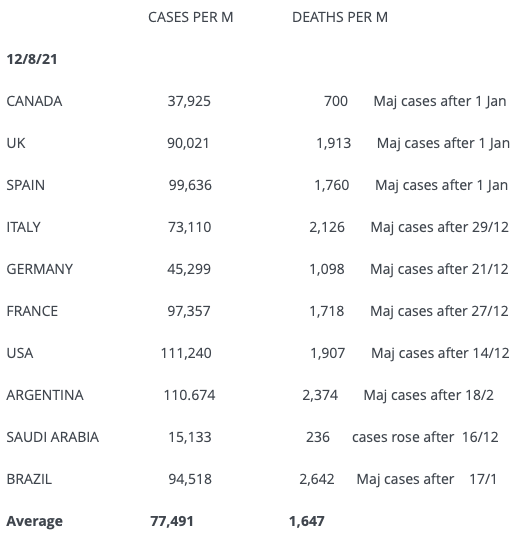 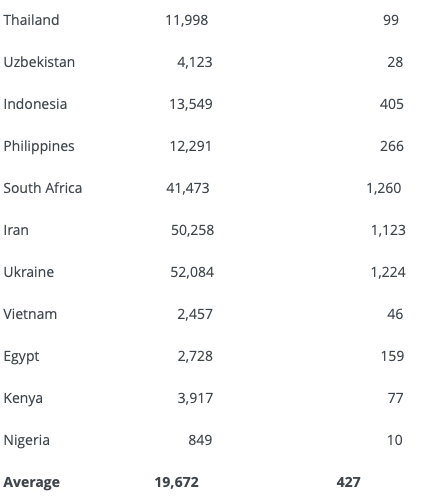 After 8 months of frenetic vaccination activity there was a total for the EU/UK/USA of  34,052 Covid-19 injection related deaths and over 5.46 million injuries reported as at 1 August 2021. The above country figures are backed up by detailed evidence from Israel and the UK of vaccine induced deaths and/or the failure of vaccines to protect the vaccinated.

A groundbreaking preprint paper by the prestigious Oxford University Clinical Research Group, published Aug. 10 in The Lancet makes a complete mockery of the dangerous and ignorant corporations and governments who are seeking to punish the unvaccinated and promote the vaccinated. DELTA AIRLINES in the USA for instance is charging their unvaccinated employees a $200 a month “health insurance”.

So DELTA should be charging the vaccinated – or indeed stopping them from coming to work as a danger to everyone else.

Israel is one of the most highly vaccinated countries in the world and yet by far the greatest number of cases are in the vaccinated. If the vaccine had been effective of course the vast majority of the cases would be in the unvaccinated. But in the period 27th June to July 3rd 79% of the cases in the 20-29 age group were in vaccinated people ranging up to 100% in the 90+ age group.

This is the Israeli data for infection breakthrough among vaccinated with 2 shots of Pfizer. Seems that efficacy is close to zero.. pic.twitter.com/F7nkrNVdp0

Takes a few months for vaccine dangers to show: see this.

What Is the Real Deaths from Vaccine Figure?

Public Health Scotland have revealed that 5,522 people have died within twenty-eight days of having a Covid-19 vaccine within the 6 months Dec 2020 to June 21) in Scotland alone.

“The answer to your question is 596 deaths involving COVID-19 has been registered where there was no pre-existing medical condition between March 2020 and January 2021” . That is 85 per month and less than one tenth of the vaccine deaths reported.

Considering that up to August 2021 there are supposed to be only 1550 deaths in the whole of the UK (Scotland, England, Wales and  Northern Ireland, this makes the UK Government reporting system look fraudulent in the extreme. Allowing for the far greater population in England suggests 57,000 deaths in the UK as a whole.

This should be no surprise since a 2009 Harvard study showed that only 1% of adverse reactions were being officially registered in the USA and a statistician whistleblower in the US (with access to Medicare and Medicaid reports) is on record as claiming that the deaths from the vaccine are probably 5 times the reported figure. Many in the UK have reported that deaths of which they knew were not registered on the system.

Vaccine Lies from the NHS and the USA’s FDA

The official NHS statement of side effects from the COVID vaccines is:

“Most side effects are mild and should not last longer than a week, such as:

You may also get a high temperature or feel hot or shivery 1 or 2 days after your vaccination” See this.

In the USA the FDA also lies about vaccine effects:

“The most commonly reported side effects by those clinical trial participants who received Comirnaty were pain, redness and swelling at the injection site, fatigue, headache, muscle or joint pain, chills, and fever.”

We know from the over 34,000 deaths and over a million serious side effects on both sides of the Atlantic that these statements are criminally negligent outright lies.

Does the British NHS not talk to Public Health England?

To be aware of these deaths, never mind the serious thrombosis and heart inflammation effects especially on young peopleand still consider vaccinating 12-15 years olds is criminal behaviour by any standards.

The sooner the “Nuremberg 2” trials begin the better. http://freenations.net/illegality-of-vax-passports-nuremberg-trial-for-politicians-and-a-blast-from-the-nazi-past/ These State and medical elitists must be made accountable.

This post was written by Rodney Atkinson and originally published by Freenations.net and republished by Globalresearch.ca.