You are here: Home » News » Jesuit Agendas » Racism » More on Domestic Terrorism: Who Will be the Target? 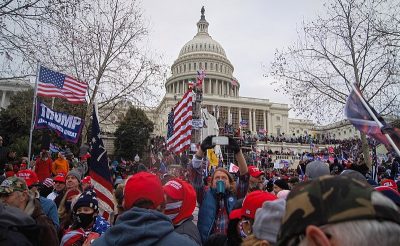 When the so-called war on domestic terrorism was declared quite early on in the Joe Biden Administration it provoked a wave of dissent from those who recognized that it would inevitably be used to stifle free speech and target constituencies that do not agree with the White House’s plans for sweeping changes in how the country is governed. Some rightly pointed out that every time the Federal government declares war on anyone or anything, to include drugs, poverty, or even Afghanistan, the results are generally counter-productive. But others noted that once fundamental liberties are taken away they will likely never return.

At first there were reports that the Justice Department and Federal Bureau of Investigation (FBI) were increasing their investigations, many centered on the so-called U.S. Capitol “insurrection” of January 6th, which it now appears might have been in part incited by the FBI itself. The scope of the inquiries into how perfectly legal opposition groups operate and proliferate in the U.S. soon broadened to include opponents of much of the social engineering that the Democrats have brought with them to change the face of America. “Hate” or “extremist” groups and individuals became the targets with “hate” and “extremism” liberally defined as anyone whose identity or agenda did not coincide with that of the Democratic Party.

This effort to root out “domestic terrorism” needed a focus and that came with what was claimed to be an intelligence community joint assessment in March which labeled “white supremacists” and “anti-government extremists” as “the two most lethal elements of today’s domestic terrorism threat.” The White House echoed that judgement, claiming that the report’s conclusions had identified “the most urgent terrorism threat the United States faces today.”

The report’s conclusions were somewhat odd and it would be interesting to know who wrote it and whether there was any dissent over what it included. Presumably, no one was empowered to suggest that surging black violence over the past year is a major “domestic terror” issue. The conclusion therefore was skewed – while no one would deny that there have been violent incidents involving white racist group and individuals, they are far outnumbered by the deaths that have taken place due to the black lives matter movement, which both government and corporate America have embraced. Given that, the targeting of “white” groups must be considered to be essentially political, particularly insofar as the White House and Attorney General Merrick Garland have made every effort to link the “racist-extremists” to the Republican Party and more particularly to Donald Trump.

All of this came together last Tuesday when Garland released the first-ever “National Strategy for Countering Domestic Terrorism,” which had been a work in progress ordered by President Biden on his very first day in office. The plan is a curious mixture of enhancement of traditional law enforcement measures, to include calls for increased information-sharing between governments and technology sectors, as well as an infusion of over $100 million to hire more focused prosecutors, investigators, and intelligence specialists. Ominously, it also supports setting up mechanisms for screening government employees for ties to “extremist” and hate groups, meaning that anyone belonging to a group that praises the virtues of European nations or the white race will quickly become unemployed. Such screening is already taking place in the Department of Homeland Security and the Defense Department. The overall strategic objective is to attempt to prevent recruitment by extremist groups by, inter alia, increasing the law enforcement penetration and investigation of such entities while also marginalizing and punishing those individuals who do become members.

Biden’s war on domestic terrorism is so far lacking new legislation that will enable the authorities “to successfully hunt down, prosecute, and imprison homegrown extremists” just because they have been generically labeled extreme, but presumably that is coming. Interestingly, one would expect a Justice Department document to be race and gender neutral, but it is anything but that, again reenforcing that it is a political statement. It sees as a major objective for the government to directly confront “racism and bigotry as drivers of domestic terrorism.”

Merrick Garland spoke briefly to the media when he was releasing the document. He claimed that the robust government approach would not infringe on First and Fourth Amendment Constitutional rights, the rights of free speech and assembly and freedom from searches without due process. But then he oddly enough added that “The only way to find sustainable solutions is not only to disrupt and deter, but also to address the root causes of violence.” If one follows that line of reasoning and accepts that white supremacists are the major problem, then the assumption is that available resources will go to where the problem is: white people who oppose government policies, which might presumably include anyone who voted for Donald Trump.

Garland then added that the new strategy would be “focused on violence, not on ideology,” as “We do not prosecute people for their beliefs.” One might argue with that assertion as the policy clearly targets individuals for their beliefs, including that they have a constitutional right to be left alone by a meddling federal government. Ironically, the American Civil Liberties Union (ACLU) responded to the document by complaining that its tactics employ “abusive counterterrorism tools that result in unfair and unjustified surveillance and targeting of Black and Brown people, particularly Muslims.” ACLU has it wrong and should have read the document more carefully: it actually targets white people.

Inevitably such a report that is seeking to pursue and transform most of the U.S. population produced a reaction. One of the most ridiculous came from Cynthia Miller-Idriss, who heads the Polarization and Extremism Research and Innovation Lab (PERIL) at American University,  writing for The Atlantic,  who believes it is a “public health problem, not a security issue.” She wrote “The extremism we’re now seeing in the U.S. is ‘post-organizational,’ characterized by fluid online boundaries and a breakdown of formal groups and movements …. To fight this amorphous kind of radicalization, the federal government needs to see the problem as a whole-of-society, public-health issue.”

So if it is a public health issue the government will no doubt order development of a vaccine at great expense that will be mandatory for all Americans above the age of twelve. As Biden has identified the threat in racial terms, even though it is being claimed that no one’s rights will be violated, how will law enforcement let off the leash to pursue the target of choice respond? What to do about the numerous white ethnic societies that exist in the United States to celebrate their heritage? Italian-Americans, Irish-Americans and German-Americans watch out! And wait a minute, aren’t organizations like black lives matter already supporting a certain level of violence to bring about change? But presumably only “whites” will be surveilled because the government has identified them as the problem. Looking at the issues being raised and the solutions being suggested one might conclude that the real problem in America is not necessarily extremism among the people but rather extremism in the government. We have been taught undesired and quite frankly hypocritical lessons by four presidents in a row and perhaps it is now time that we be left alone!