You are here: Home » Prophecies » A MIRACLE MOMENT is now upon women who have been in long standing journeys of contending for healing.” 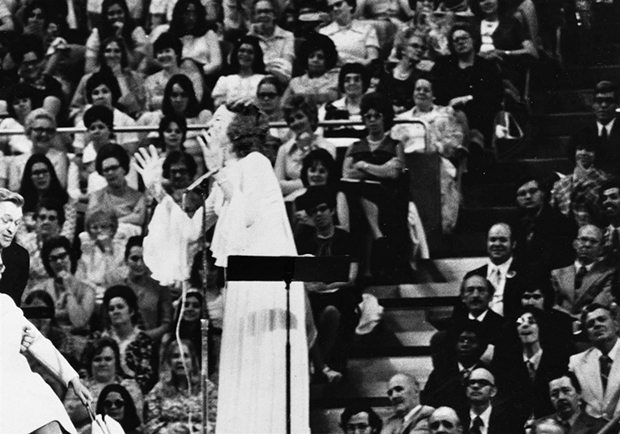 I watched in this encounter as each woman was standing on the promises of God and began to stamp their feet hard on the ground. No matter how long they had been standing and contending, they refused to move off the Word of God and the fire of conviction to see the Word of God manifest in their life was getting stronger and stronger. I began to notice that these women all across the earth as they stamped their feet, were actually stamping their feet in UNISON. They were all stamping their feet to the same beat. Each time they stamped their feet in faith with the promise of God for healing in their lives, it was like I could hear the sound of a hammer, coming down and the atmosphere was SO pregnant. It was SO thick. The sound of the hammer coming down strongly spoke so loudly of the BREAKING FORTH of BREAKTHROUGH but it also spoke of JUSTICE. The sound of the gavel coming down.

The Lord spoke to me, “A MIRACLE MOMENT is now upon these women who have been in long standing journeys of contending for healing.”

The explosive miracle that took place in their lives not only brought forth the fulfillment of the Word of the Lord (Isaiah 55:11) but it also activated a birthing that had been taking place. I was taken back to the sound of the women of God stamping their feet in unison and beating to the same rhythm. The Lord then spoke these words:

“The rhythm that you hear is the rhythm of My heart being released in the spirit for the greatest healing revival that has ever been seen coming forth on the earth and these women are KEY in this revival.”

Suddenly, I saw the birthing taking place in the earth and much of it was flowing from the lives of these women all across the earth and as I looked closer in the Spirit it was like the anointing that Kathryn Kuhlman carried.

It isn’t that all that will move in this anointing like that of Kathryn Kuhlman, having a ministry that looks like hers. It is a MANTLE. It was a mantle for unusual, astounding signs, wonders and miracles that is birthed from the place of deep, deep intimacy.

Kathryn Kuhlman’s life and ministry hold keys for this new era that are not just for the anointing that will be released upon daughters of God, but keys of wisdom and impartation in stewarding this new era.

“This activation will happen simultaneously with the miracle of their healing.”

The sense surrounded me so strongly that this activation of this glorious healing anointing would literally happen ‘overnight’. It wouldn’t be a long drawn out process, but as the healing manifested in many of their lives, then suddenly, the anointing was released.

“Watch these women, for they will carry My keys of strategy and wisdom for this new era. Watch what they speak for their words will carry weight to unlock.”

I looked up and I saw golden leaves beginning to fall from the sky and I heard Revelation 22:2:

“On either side of the river was the tree of life, bearing twelve kinds of fruit, yielding its fruit every month; and the leaves of the tree were for the healing of the nations.” (NASB)

The Lord then spoke again:

The anointing that they had received from the Lord was so different than anything that had been seen on the earth before, and the divine strategy the Lord had given them firmly rooted in the Word of God was the key. They were being sent out in various ways into the nations to bring HEALING to the nations in the proclamation and revelation of Jesus, His anointing and His wisdom.

I then heard the Lord say:

“I am sending these daughters of Mine forth anointed with a boldness they have never carried to proclaim My Word, to preach the Gospel and to see My Spirit bring forth healing in the earth that has never been seen before. They will stand not afraid of man or what may come to them, but they stand in the awe of who I am. They stand in reverence of who I am and they will boldly decree and preach and mighty waves of My healing anointing will be released into the earth.

They will be known in the earth as reformers. The fire that tried to kill them only formed them because I was with them in the fire and they now go forth to carry the fire of My presence and see a mighty healing revival wherever I send them. A spirit of fear in the areas where they were contending for healing almost killed them, but now I send them forth in boldness, My boldness, in the revelation of who I am, and they shall bring fear upon the enemy’s camp because of the revelation they carry of who I am and who I am in them.

The time has come for a scene shift. The scene shift of victory. The scene has shifted now to COMMISSION. These ones seek not fame or their name to be known, they lift up My name and My Glory shall be strongly upon them. These women will be written about in history because of their boldness and the anointing that flowed through their lives, seeing signs, wonders and miracles that will draw the WORLD to Jesus. They will not only operate in a powerful healing anointing that has not seen seen before, but a heavy mantle of evangelism will also fall upon them as they see multitudes come to know Me.”

The Lord showed me that there will be some daughters of God carrying this healing anointing that will be raised up by the hand of the Lord in this new era with incredible, astounding favor and because of their obedience and yielding to the Lord and communion with the Holy Spirit will be entrusted with much. There will be stadium events held in this new era where these daughters of God will minister, the stadiums filled. And there will be thousands upon thousands upon thousands of healings, signs, wonders and miracles and many will look and say, ‘The days of Kathryn Kuhlman have returned’. It will be her ministry of unusual power as a type and shadow of what she fore-ran. There will be great similarities to the ministry of Kathryn Kuhlman, but it will not be a replica. It will be MORE than Kathryn Kuhlman saw.

The manifest presence of God, the weight of His holiness, the holy hush and quietness in some of these stadiums as the weight of His Glory falls, will see the power of God displayed in ways we have never seen before. They will stand on those platforms not delighting in the thousands upon thousands that have come to their meetings, but there will be only One in the room that their eyes are on. They will be focused on Him, their gaze locked with His. Communing with the Holy Spirit and dancing with Him in His heartbeat and rhythm for what He is doing. The world, the media, the nations, will pay attention as it is reported far and wide what the Lord is doing.

And the greatest part about it is…

It will be all for His Glory!

Lana: As I read your article I felt “goose bumps” sliding up my neck and then tears in my eyes. I receive this healing that God has shown you. I have been contending with fear of walking in the gift God has given me and contending for physical healing. Recently, I had a dream that seemed to indicate the migraines would not be removed, yet now I am believing for that miracle. Might I pray for you?

“Father, I bring Lana to you and place her at your feet. Father instill a mighty Armour around her heart that the enemy cannot penetrate. Fill her with your wisdom and discernment. Give her boldness when she does not feel bold, give her confidence when she is unsure. Father, continue your good work in Lana and I thank you for her presence in the earth. I thank you for your word that she shares, protect her and sanctify her in your grace. Amen”

I am leaving the link to the dream I mentioned, I had that about 3 weeks ago. Tell me if part of this is what you were seeing. Kasey
http://propheticdreams.home.blog/2020/02/13/white-light/

Fantastic. The power of God is coming

His love is life changing! There is no other like Him.

Dear Lana,
Thank you for sharing this Word. I am stunned because I believe this Word pertains to me as well. Been searching for a long time, leaving my old life behind, wondering, seeking, asking for healing. Both physically and spiritually, and wondering how I am to serve Our Lord.. Never wanting to go back to my vain life, just wanting to do God’s will. Helping to heal others in whichever way God chooses for His Glory. For I am worried about the people who do not know God at this precarious time. I will come back to this post, thank you. God Blesz. LoriQ

I am one that the Lord is going to use. I get words of encouragement for others and dreams/images. When I read this …it was directed right to me. I have seen a vision of me in front of a large crowd or auditorium speaking. I have longed prayed for God to use me on a big scale to win the hearts to his kingdom. I am an open vessel and ready to take flight! #TIMEISNOW!