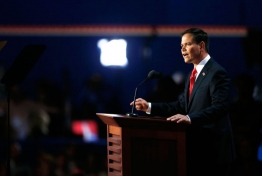 Marco Rubio, the Republican junior U.S. Senator from Florida, recently spoke on what he believes to be the breakdown of the American family and its direct consequence on the country’s economy.

“I think morality ultimately is the function of the church and our faith, not government, but certainly government cannot be immune from morality, nor can our society because the breakdown in morality is having a direct economic consequence on our country,” Rubio said in a Wednesday interview with Christian Broadcasting Network’s “The Brody File.”

“That doesn’t mean I can go out and pass a law to create stronger families but it does mean that as leaders, if we do not recognize the impact that the social and moral well-being of our people are having on our economy and ultimately on our country, we’re blinded into a big problem,” Rubio added.

Rubio, who has been described by many political pundits as a rising star for the GOP Party, also delivered the Republican response to President Barack Obama’s State of the Union address on Tuesday.