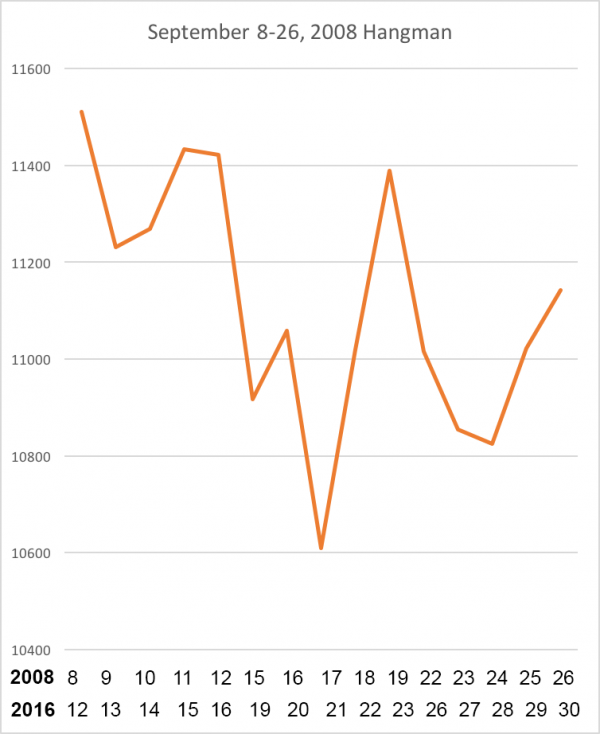 Exactly eight years ago, the equities market was following a similar pattern as what we have seen so far in August and September 2016. In 2008, it dropped very sharply in the middle of September, a drop very similar to what many are expecting to see this month, which we at Z3 are calling a hangman. If this pattern repeats itself this month, we would see the second hangman within the next few days.

The graph shown above includes three weeks of Dow index closing prices from September 8-26, 2008. Corresponding dates for 2016 are shown below the 2008 dates, but the dates don’t have to line up as long as the pattern holds up. Dates can be pushed forward or backwards.

Here are some things to watch for:

None of these things have to happen again this year, but they might because historical patterns often repeat.

James,
Thank you for all you do here on Z3. Your site has helped me tremendously and I have learned so much. The people here on Z3 are great and I feel like I’m missing something if I can’t check my phone because of my work schedule.

Unlike 08 I am ready this time , like so many here to be on the right side of the hangman.
God bless you and your family

Thanks for the great feedback Ed.

Thank you James for keeping us up to date with these articles.

Thank you James for this article and all the work you put into it and the others. I know we are expecting the 2nd hangman very soon but does anyone know anything about the timing of the 3rd hangman? I would think it would occur October-November but maybe it’s possible the 3rd hangman is next year? Also, James, (or others) do you plan on being positioned with both FAZ and UVXY for the 3rd hangman or just FAZ? Obviously, it’s (correct me if I’m wrong) at the 3rd hangman that FAZ skyrockets but regarding UVXY would that be the 2nd or 3rd hangman or both where it blasts off?

I have not been shown any dates for the hangman. Regarding trading, I am very close to switching out of UVXY and into FAZ. I also like Bank of America put options (BAC) because their prices are very low.

Mr. Bailey for BAC what kind of expiration and strike are you looking at?
I was thinking late November and December.

Everyone has their own way of doing things, but I like to go with short dates to get them super cheap, then if you were wrong about the timing and they expire worthless you still have money to buy them super cheap again later.

Thank you James for this article and all the incredible work you put into z3news.
You have been very quiet on the USDCHF trade of late. Have you got any updates on this? Would be appreciated. Still awaiting a strong move above 1.2 but have had to remain Patient. This move may proceed the big US share crash..
God Bless you and your wife

Since I was not shown any dates, I have attempted to translate scenes from my karate fight dream into actual price movements, which is very challenging. The initial price movements seemed to fit well with the fight scenes with the quick slaps from the USD fighter and the big punch from the CHF fighter, but we are still waiting for the super fast final attack from the USD fighter. Another possibility is the dream revealed a macro perspective, which could mean the big punch has not even happened yet and the dollar could go much lower before recovering and moving much higher. I stopped trading forex until I know where it is going.

My current focus is on the equities market because I am expecting to see volatility there too. As long as we keep following the pattern from 2008, I am staying on that trail. If the pattern disappears then I will likely sit out and wait for more clarity. The next week or two will reveal a lot about that.

I just was playing with your 2008 picture, if we follow 08 and drop for 3 days matching the 08 percentages, starting at the close friday at 2139 sp, then we should land spot on 1992, very close to P’s early target before adjusting higher, but, leaving the door open to lower.

This has my extra attention for 2 additional reasons:

James, i must have missed something, why end of the week? Thanks

That is just my own understanding based on someone else who studies historical cycles, which show September 22-23 is a turning point, but does not identify whether it is a top or a bottom. Then there are some prophetic insights about September 29-30, which I have not personally received, but have heard from others.

James, looked at my stuff, Andy Pancholli’s turn is the 23rd. Absent revelation, my guess is the 23rd will be the bottom. Techncial EW work is pointing at a 3rd wave down right now, as you pointed out, 08 started on a monday. Tomorrow is monday.(NY is on edge- we should seek a hedge of protection for everyone in NY, including my daughter.)

Three days down (MTW,) leaving 2-3more trading days to bounce back up and fall to a higher low on friday afternoon or early monday, thus marking the beginning of the final rally and turn up on the 23rd. Wish i had revelation to add on to it.
We shall see.

YES +1 Phil! I have been wondering about this trade a lot……and I have had my tail handed to me on a platter from this

james when do you expect gold and silver to drop again and how far down do you think it will go thanks for what you do ……………….bob

I don’t follow the metals market close enough to know. I had a dream which indicates a big drop is coming soon, but that is only if the interpretation is right. So far, the price has done what the dream showed, so we’ll see.

Has anyone though about puts on AMZN (amazon)?!
It seems massively overvalued!

Mark,
Good call. Yes I have been watching it and Apple. This morning I bought options on AAPL for 9/16 115C. It immediately went up and then dropped so I panicked and sold it. Long story short at end of day those options went up 950%.
Amazon and AAPL have been the shinning stars. Amazons options are too expensive for me. You can do just as well or better with other stock pics in my opinion.