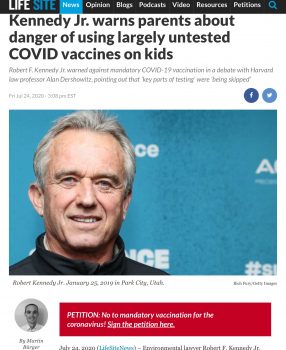 Read this article very carefully. Be sure to click on the 4 pharmaceutical companies separately to see the number & scope of penalties assessed against each company for illegal activity! The testing process is deeply flawed! 1) Only healthy individuals are receiving the vaccine & even with this healthy population, there was a 6% negative reaction with a person requiring hospitalization in the low-dose group and 20% in the high-dose group requiring hospitalization. 2)The total test group for a vaccine to be given to potentially billions of people was 45 people, statistically insignificant! 3) No animal testing was done. Despite these major problems, Moderna is manufacturing 2 billion doses!

A few excerpts from the article I want to highlight include:

***”Kennedy stressed several times that ‘any other medicine … that had that kind of profile in its original phase-one study would be [dead on arrival].’”***

***“In the past 10 years, just in the last decade, those companies [4 major, multinational pharmaceutical companies] have paid 35 billion dollars in criminal penalties, damages, fines, for lying to doctors, for defrauding science, for falsifying science, for killing hundreds of thousands of Americans knowingly.”***. Is this an industry and companies we as people can trust based on their past behaviors?

Trump has tweeted that the vaccine will not be mandatory but there is the very real risk that he will flip on this position as he has done on other issues.

** No discussion occurred about “the ethical issue of many vaccines being derived from cell lines of aborted babies”.**

Link to Original Article on LiseSiteNews.com By Martin Bürger

July 24, 2020 (LifeSiteNews) – Environmental lawyer Robert F. Kennedy Jr. warned Americans on Thursday to be cautious about any new coronavirus vaccine, pointing out that key parts of testing are being skipped.

“The Moderna vaccine, which is the lead candidate, skipped the animal testing altogether,” Kennedy said during an online debate on mandatory vaccinations with renowned Harvard law professor Alan Dershowitz. The debate was aired by Valuetainment and moderated by Patrick Bet-David.

Kennedy is part of a political family, being the son of Senator Robert F. Kennedy and the nephew of President John F. Kennedy. Both were murdered in the 1960s.

In spite of these significant problems, “they’re going ahead, and making two billion doses of that vaccine.”

Another problem with the testing of the coronavirus vaccine is that it’s tested not on “typical Americans,” but a carefully selected group of people who don’t suffer from certain conditions.

“They use what they call exclusionary criteria,” Kennedy said. “They are only giving these vaccines in these tests that they’re doing to the healthiest people.”

He asked, “What happens when they give them to the typical American? You know, Sally Six-Pack and Joe Bag of Donuts who’s 50 pounds overweight and has diabetes.”

Kennedy stressed several times that “any other medicine … that had that kind of profile in its original phase-one study would be [dead on arrival].”

“No medical product in the world would be able to go forward with the profile that Moderna has,” he reiterated.

During the course of the debate, Kennedy also talked about the regular vaccines most people take, from Hepatitis B to the flu shot, emphasizing that no proper testing had ever been done, which is mandatory for any other medication. Vaccines “are the only medical product that does not have to be safety-tested against a placebo,” he explained.

In a study involving placebos, one group of people would be injected with the actual vaccine, while another group would be injected with saline solution, which would not have any effect in preventing a particular disease. The people who are part of the study would then be observed to see if there are any differences between the two groups, both regarding the disease vaccinated against, and side effects.

As these tests are never done on vaccines, “nobody knows the risk profile of any vaccine that is currently on the schedule. And that means nobody can say with any scientific certainty that that vaccine is averting more injuries and deaths than it’s causing.

In fact, it should be the opposite, Kennedy said, with vaccines being tested even more thoroughly than any other medication.

Kennedy said “it’s not hypothetical that vaccines cause injury, and that injuries are not rare. The vaccine courts have paid out four billion dollars” over the past three decades, “and the threshold for getting back into a vaccine court and getting a judgment – [the Department of Health and Human Services] admits that fewer than one percent of people who are injured ever even get to court.”

He mentioned another reason not to trust blindly any company currently producing vaccines in the United States. Each one of the four vaccine producers “is a convicted serial felon: Glaxo, Sanofi, Pfizer, Merck.”

“In the past 10 years, just in the last decade, those companies have paid 35 billion dollars in criminal penalties, damages, fines, for lying to doctors, for defrauding science, for falsifying science, for killing hundreds of thousands of Americans knowingly.”

“It requires a cognitive dissonance,” Kennedy commented, “for people who understand the criminal corporate cultures of these four companies to believe that they’re doing this in every other product that they have, but they’re not doing it with vaccines.”

While Kennedy is often described as being against vaccines altogether, he stressed that he does not oppose vaccines, as such. He accused his critics of “marginalizing me and silencing me” by misrepresenting his actual position.

In May, Kennedy signed an appeal created by Archbishop Carlo Maria Viganò aimed at raising public awareness among people, governments, scientists, and the media about the serious dangers to individual freedom caused during the spread of Covid-19.

The appeal raised concern at one point about a COVID-19 vaccination in relation to human freedom.

“We also ask government leaders to ensure that forms of control over people, whether through tracking systems or any other form of location-finding, are rigorously avoided. The fight against Covid-19, however serious, must not be the pretext for supporting the hidden intentions of supranational bodies that have very strong commercial and political interests in this plan. In particular, citizens must be given the opportunity to refuse these restrictions on personal freedom, without any penalty whatsoever being imposed on those who do not wish to use vaccines, contact tracking or any other similar tool.”

The appeal made it clear that for Catholics it is “morally unacceptable to develop or use vaccines derived from material from aborted fetuses.”

Comments on the YouTube video of the debate between Kennedy and Dershowitz indicated, almost unanimously, that Kennedy had won the debate. Dershowitz conceded many points, arguing, however, that from the point of view of constitutional law, the coronavirus vaccine could be made mandatory.

Kennedy clarified that the state government at the time had offered people to either be vaccinated or pay a five dollar fine. Dershowitz’s argument, however, was that based on constitutional law, including this precedent, “the state has the power to literally take you to a doctor’s office and plunge a needle into your arm.”

Kennedy said, “I think there’s a big constitutional chasm between, you know, that remedy, which is paying a fine, and actually going in and holding somebody down and forcibly injecting them.”

President Trump has already said that the new coronavirus vaccine would not be mandatory, but available for those “who want to get it. Not everyone is going to want to get it.” A LifeSiteNews petition saying no to mandatory vaccinations has garnered more than 650,000 signatures and can still be signed here.

The ethical issue of many vaccines being derived from cell lines of aborted babies was not discussed during the debate.

Additional Article I would encourage everyone to read, “Red Flags Soar As Big Pharma Will Be Exempt From COVID-19 Vaccine Liability Claims“

Excerpt – “A senior executive from AstraZeneca, Britain’s second-largest drugmaker, told Reuters that his company was just granted protection from all legal action if the company’s vaccine led to damaging side effects.

‘This is a unique situation where we as a company simply cannot take the risk if in … four years the vaccine is showing side effects,’ said Ruud Dobber, a top exec at AstraZeneca.”

Thank you for writing this up, and especially, for sharing the petition. I hope the petition continues to gather signatures.

Even our Father does not force people into heaven as justification of saving them from an eternity apart from Him.

Excellent post & information Expat Gal … Oh boy! Info re the 4 major vaccine producers is a convicted serial felon Glaxo etc… Back in 2004-2005 I was working in a large Medical practice as a Registered Nurse.. because the practice did childhood immunisations , travel vaccines, and adult vaccinations.. seasonal flu injections ..I had to do an intensive 8-9 week course at Latrobe university & pass the required exams by the University & the Nursing board to be able to give the vaccines as all the registered Nurses in the practice had to give vaccines during the course of a regular shift.. the Drs would check the patient first then usually 2 nurses would give the vaccine especially if they were small children. At the time there was info in our immunisation handbook re the debate over whether there was a direct link between Autism & vaccination in early childhood before 3 months of age.. from memory the handbook gave info to say the vaccines were safe..but warned some parents may object to the child having these and they termed the parent conscientious objectors….it was about 2006 due to family commitments ,circumstances that i resigned from the practice and worked closer to home..for about 6 months. then phased out of that area altogether… never to return to giving vaccinations.. of course as the years have gone on there has been so much debate around this whole subject. . Whooping cough is another big one also..there were a few cases that came into focus and parents were worried re their baby,young child catching whooping cough from un- vaccinated children who had the disease as it is deadly..in severe cases..In our play centres and before children start prep.school they have to have a certificate from the Local Dr.stating they have had… Read more »

Hi Tom – If you click on the blue hyperlink that says “Petition”, it will take you to it. Here is the full link also – https://lifepetitions.com/petition/no-mandatory-vaccine-for-covid-19

This is the heated vaccine debate between -Kennedy Jnr. Verses Dershowitz.

another video in related:
2) https://www.youtube.com/watch?v=oso2No6nP1o

Bill Gates will loose billions if they dont make a vaccine mandatory..