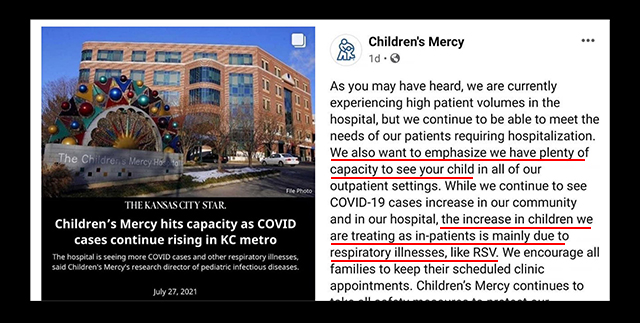 Children’s Mercy Hospital in Kansas City pushed back against the media’s hysterical narrative that their hospital had “hit capacity” due to child covid cases by pointing out that most of their child patients have respiratory syncytial virus (RSV), not covid, and they have “plenty of capacity” to see kids in outpatient settings.

“As you may have heard, we are currently experiencing high patient volumes in the hospital, but we continue to be able to meet the needs of our patients requiring hospitalization,” Children’s Mercy responded in a statement posted to Facebook on July 28. “We also want to emphasize we have plenty of capacity to see your child in all of our outpatient settings.”

“While we continue to see COVID-19 cases increase in our community and in our hospital, the increase in children we are treating as in-patients is mainly due to respiratory illnesses, like RSV,” Children’s Mercy continued. “We encourage all families to keep their scheduled clinic appointments.”

Children’s Mercy, which has 367-beds, said Thursday that they had 19 hospitalized child covid patients in total.

There has been a significant surge of RSV cases among children throughout our country since July.

“So we’re all clear: when you read those worrying stories about a respiratory virus filling children’s hospitals, you are reading about RSV,” Alex Berenson said Saturday on Twitter. “And the likely reason this is happening now is because lockdowns prevented normal exposure, so 18 months of cases are happening at once.”

So we’re all clear: when you read those worrying stories about a respiratory virus filling children’s hospitals, you are reading about RSV. And the likely reason this is happening now is because lockdowns prevented normal exposure, so 18 months of cases are happening at once: pic.twitter.com/c1acIYeGCT

From WATE, “East Tennessee Children’s Hospital reports more RSV cases in July than first half of 2021”:

East Tennessee Children’s Hospital said they have treated more cases of Respiratory Syncytial Disease, or RSV, in July than the first six months of 2021 combined.

There have been a total of 303 RSV cases at the Knoxville hospital in the month of July, two more cases than reported in the first six months of 2021 combined.

RSV is a contagious virus in children and can cause respiratory infections that can lead to more serious illnesses such as pneumonia. In June, the Centers for Disease Control issued a health advisory after seeing an increase in RSV cases across the southern United States.

“Due to reduced circulation of RSV during the winter months of 2020–2021, older infants and toddlers might now be at increased risk of severe RSV-associated illness since they have likely not had typical levels of exposure to RSV during the past 15 months,” a release from the CDC said.

We have still yet to see the full extent of the damage caused by our government’s disastrous lockdown policies.

Some states are looking at yet more lockdowns come fall and winter and public health authorities working together with the media have gone into fearmongering overdrive outright terrorizing the population that we’re all going to die if every last person doesn’t take Big Pharma’s increasingly-ineffective mRNA injections.

Can’t make it up pic.twitter.com/SkxDwiBrlS