Specifically, the document includes the following statements to identify as dangerous terrorist threats anyone opposing the overreaching mandates imposed upon us in the name of public health safety:

“These actors are increasingly exploiting online forums to influence and spread violent extremist narratives and promote violent activity. Such threats are also exacerbated by impacts of the ongoing global pandemic, including grievances over public health safety measures and perceived government restrictions.”

“These extremists may seek to exploit the emergence of COVID-19 variants by viewing the potential re-establishment of public health restrictions across the United States as a rationale to conduct attacks.  Pandemic-related stressors have contributed to increased societal strains and tensions, driving several plots by domestic violent extremists, and they may contribute to more violence this year.”

“There are also continued, non-specific calls for violence on multiple online platforms associated with DVE ideologies or conspiracy theories on perceived election fraud and alleged reinstatement, and responses to anticipated restrictions relating to the increasing COVID cases.”

“Law enforcement have expressed concerns that the broader sharing of false narratives and conspiracy theories will gain traction in mainstream environments, resulting in individuals or small groups embracing violent tactics to achieve their desired objectives. With a diverse array of threats, DHS is concerned that increased outbreaks of violence in some locations, as well as targeted attacks against law enforcement, may strain local resources.”

“If You See Something, Say Something®. Report suspicious activity to local law enforcement or call 911.”

Ironically, the world’s biggest terrorist threat actually comes from the same people running the United States federal government from behind the scenes, the Jesuits. Based on their previous history, we can expect them to carry out the same terrorist activities warned about in this document so they can blame it on those they have identified as resistors to their tyrannical plans.

The outrageous statements in this document reveal their true agenda as they are attempting to use the fake pandemic narrative to gain public support for their ultimate goal, as revealed in the Jesuit Oath of Induction which is required for entry into their “Society”, also known as the “Society of Jesus”, by which they swear to “exterminate all heretics,” whom they define as anyone not submitted to their Jesuit Superior General, also known as the black pope. Like it or not, we are in the midst of another war of religion as thousands of years of history is repeating.

The following is an excerpt from the Jesuit Oath of Induction (see sources below):

“I furthermore promise and declare that I will, when opportunity present, make and wage relentless war, secretly or openly, against all heretics, Protestants and Liberals (Note: Their definition of Liberals is different than ours today. They’re referring to anyone who believes in individual liberties.), as I am directed to do, to extirpate and exterminate them from the face of the whole earth; and that I will spare neither age, sex or condition; and that I will hang, waste, boil, flay, strangle and bury alive these infamous heretics, rip up the stomachs and wombs of their women and crush their infants’ heads against the walls, in order to annihilate forever their execrable race. That when the same cannot be done openly, I will secretly use the poisoned cup, the strangulating cord, the steel of the poniard or the leaden bullet, regardless of the honor, rank, dignity, or authority of the person or persons, whatever may be their condition in life, either public or private, as I at any time may be directed so to do by any agent of the Pope or Superior of the Brotherhood of the Holy Faith, of the Society of Jesus.

In confirmation of which, I hereby dedicate my life, my soul and all my corporal powers, and with this dagger which I now receive, I will subscribe my name written in my own blood, in testimony thereof; and should I prove false or weaken in my determination, may my brethren and fellow soldiers of the Militia of the Pope cut off my hands and my feet, and my throat from ear to ear, my belly opened and sulphur burned therein, with all the punishment that can be inflicted upon me on earth and my soul be tortured by demons in an eternal hell forever!”

Just as millions of people worldwide were deceived by the opening act in this diabolical fake pandemic scheme, believing that a virus with a 0.2% death rate among those infected (unlike small pox which had a 30% death rate), and nearly all Covid victims being over 75 years old, is somehow a global pandemic that requires the extreme measures already taken with more mandates coming, I suspect millions will also fall for the next act as these criminals set their sites on exterminating the most extreme heretics who have rejected their poisonous injections, even to the point of reporting suspects who spread “misinformation” in obedience to the DHS campaign, “See something, say something.”

Instead of helping the psychopaths to advance their plans to murder us, we should be studying the scriptures to gain a Biblical perspective of current events, which very few have, including Christian leaders, and studying the lessons of history, which have been stolen from us by our Jesuit controlled school system, which has successfully prevented us from knowing their long history of crimes, including countless mass murders, so we can begin to understand how we got to where we are today and sound the alarm, just as our forefathers in the faith did for their generations with bold warning messages few of us have heard, to expose these evil psychopaths and lock them away forever.

Sources for Jesuit Oath of Induction:

Subterranean Rome, by Carlos Didier, (translated from French and published in New York in 1843).

Testimony of born again Christian Dr. Alberto Rivera who escaped from the Jesuit Order in 1967. He verified that the oath he was required to take was exactly word for word as it appears in Didier’s book. “Semper idem” (Always the same).

I had this send tonight from a friend in Perth that Stage 5 lockdown coming to Australia at the end of August with the the Government making us have food rashens. What next? 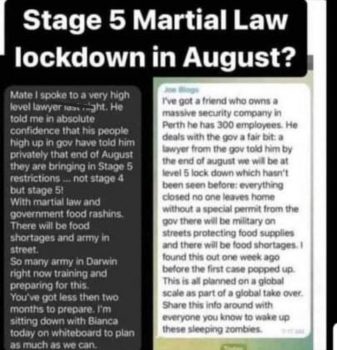 Thanks Leonie ,so can warn people. ! so much happening on many levels but spiritually things have ramped up a notch or 2 or 3.

World wide.. much disaster and disintegration of society especially this thing happening in Kabul, Political Govt, Religious and Monetary levels.. what the Good Lord warned about. ,

Luke 12:3 Therefore whatever you have said in the dark shall be heard in the light, and what you have whispered in private rooms shall be proclaimed on the housetops.

This is the fear of the powers that be. That is why there appears to be a rush to rid themselves of those who are able to bring their dark arts to light.

Stay in constant prayer and hold fast to God’s Word. Psalm 91:15 He shall call upon me and I will answer him: I will be with him in trouble; I will deliver him and honor him.