You are here: Home » News » Jesuit Agendas » Health Care News » Vaccines » “It Needs to be Hard for People to Remain Unvaccinated”: Making the Case for COVID Challenges 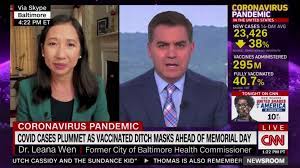 Dr. Leana Wen, CNN analyst and Distinguished Fellow at the Fitzhugh Mullan Institute of Health Workforce Equity at George Washington University, has caused a stir due to her recent declaration on CNN that “it needs to be hard for people to remain unvaccinated.”

With France implementing a mandatory “health pass” and private companies like Morgan Stanley requiring vaccinations for employees to return to work, we can expect more protests and challenges around the world. Those cases are likely to focus on whether mandatory requirements are based on medical or political imperatives. Wen’s comment is likely to be repeated in many filings as another case of “saying the quiet part out loud.” She appears to advocate measures defined to coerce people to take vaccinations due to the continuing refusal of a sizable number of people.

Wen is a well-known medical analyst and the former head of Planned Parenthood. She is a visiting professor at George Washington University.

Wen made clear that health measures should be used to make life hard for people who refuse the vaccine so that they yield to public demands: “basically, we need to make getting vaccinated the easy choice.” In the Washington Post, Wen also called for “Biden to make the case for vaccine requirements.”

There is already open pressure from the White House on private companies to require vaccinations. Morgan Stanley responded by doing just that this week. They can likely do so. The most serious challenges could come from those with religious objections. However, even if they are allowed to work remotely, Morgan Stanley CEO James Gorman stated in July that “If you want to get paid New York rates, you work in New York. None of this, ‘I’m in Colorado…and getting paid like I’m sitting in New York City. Sorry, that doesn’t work.” The message could not be clearer that working remotely will come at a penalty.

The Biden White House is clearly concerned that making vaccines mandatory will cause not just court challenges but a public backlash. However, such mandatory programs have been upheld. As I discussed in a column last year, there is a 1905 case where the Supreme Court upheld a state mandatory vaccination program of school children for small pox in Massachusetts. In Jacobson v. Massachusetts (1905), the Court found that such programs are the quintessential state power rather than a federal power. It also held that “every well-ordered society charged with the duty of conserving the safety of its members the rights of the individual in respect of his liberty may at times, under the pressure of great dangers, be subjected to such restraint, to be enforced by reasonable regulations, as the safety of the general public may demand.” States are allowed to subject citizens to restraints to protect “general comfort, health, and prosperity of the State.”

The fear is that, as with social media companies carrying out censorship of political and social viewpoints, companies will now serve as surrogates for the state on vaccinations. The Administration would prefer to do precisely what Wen advocated: ratchet up the private penalties and difficulties for anyone who wants to remain unvaccinated.

The problem is when you have leading analysts arguing for such measures as coercive devices. While there is considerable deference on such matters, the courts could take note of such demands to make life hard on those who are not “getting with the program.”

As of July 11, a total of 159,266,536 Americans have been fully vaccinated. That is 48 percent of the country’s population. When you consider the extremely high rate of vaccination for those over 65, the percentage of adults under 65 is even smaller. Despite all of the press and bizarre reward systems, the government is clearly hitting a wall with many people declining the vaccines.  (For the record, I took the vaccine and all of my family has been vaccinated).

That is a sizable number of voters and the Democrats are leery of openly forcing vaccines before the 2022 election. That is why the push is to make life more difficult through private companies. However, if these measures are viewed as designed to coerce, courts may be more scrutinizing of the public health necessity for the measures.