You are here: Home » Prophecies » “If you saw the size of the seventh seal, you would know what I mean.”
Share this post: 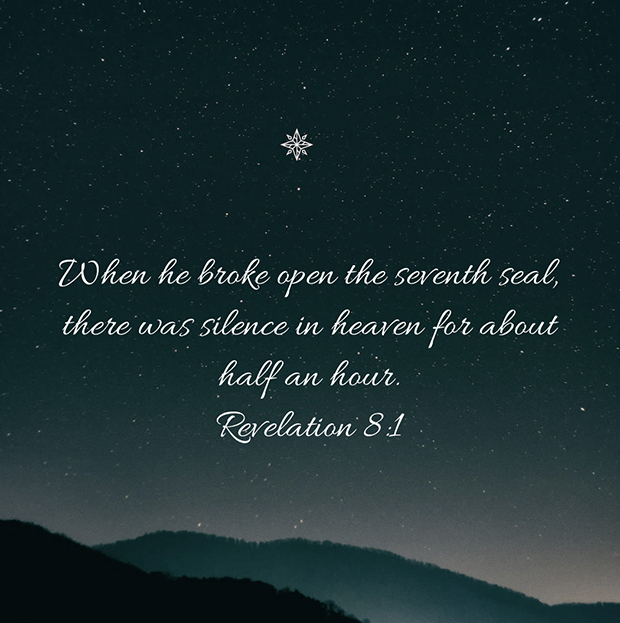 I heard an Angel singing:

Then I saw an African American couple closely aligned in a small space looking outside through a glass door or window, like they were in a phone booth. They looked very serious and concerned with worried expressions on their faces.

I thought to myself in the dream, “What does this all mean?”

Then I heard, “If you saw the size of the seventh seal, you would know what I mean.”

“the distressing claustrophobic irritability or restlessness experienced when a person, or group, is stuck at an isolated location or in confined quarters for an extended time. A person may be referred to as stir-crazy, derived from the use of stir meaning “prison”.”

After the seventh seal is broken in Revelation chapter 8, the remainder of the chapter reveals several calamities one after the other including:  hailstones of fire destroying the land and crops, an asteroid destroying the sea and ships as well as sea creatures, a comet poisoning the waters and humanity, and then a loss of light from the stars, the moon and the sun.

Then I heard the Lord saying to me the following concerning the timing of the 7th seal;

“As inconceivable as it seems to the human mind; truly what is impossible to God? As the earth enters into Orion’s Belt, many hundreds of comets and asteroids will be pulled towards earth by the gravitational pull of the Sun.  Some will burn up in the Sun, but others will ricochet past the Sun and enter earth’s atmosphere.  Some larger comets will break up into many small pieces and appear as fiery hail upon the earth.  When this happens, you will know that the seventh seal has opened and the remainder of the events will occur quickly one upon the other.”

“Have you tied cords to the Pleiades, or loosened the bonds of Orion?” (‭‭Job‬ ‭38:31‬ ‭NABRE)‬‬

Pray, pray, pray
And repent!
For the kingdom of heaven,
is at hand.

Then the sky was divided like a torn scroll curling up, and every mountain and island was moved from its place.”
Revelation 6:14 NABRE

Also Isaiah 34:4 speaks of the sky rolling up like a scroll.

I also believe I understand the first part of the Angel singing Kobe fever, Kobe has a cabin fever.
(Holy Spirit reminded me of St. Maximilian Kolbe)

There is a great St. called St. Maximilian Kolbe who died in Nazi Germany at Aushwitz when he volunteered to die in the starvation chambers of the prison camp in place of another man who was a father with five children.  He was put in a small space with several other men who were then starved to death as punishment for an attempted breakout.  St. Maximilian was a priest who prayed for the other men daily and basically would not die of starvation.  So after 30 days in confinement in the starvation chamber he was euthanized with an injection of some poison.

So I believe this warning had to do with the coming trial of food shortages and prison confinement or house confinement coming to the church, where people would get cabin fever from being forced to remain indoors along with worsening signs of the seals of revelation opening.

I believe this brings full understanding and clarity to the dream of the seventh seal.

Also, Orion’s Belt is 2000 light years away; so although it is humanly impossible to fathom our earth entering into it as the beginning of the seventh seal; according to revelation and Isaiah 34:4 the heavens shall roll back like a scroll which would then allow the impossible to be possible.

wonder if they are going to try to blame the returning Olympic athletes for the new “Delta” Variant? Kobe – Wikipedia Kobe Japan?

Thank you so much for sharing Maria. God Bless You!

I think this is a possibility:

Word is leaking out of the White House this morning that federal authorities are actually going to try to impose a nationwide lockdown, all states, starting BY the second week of August and lasting “however long” they determine it necessary.  They will use the excuse that the “Delta Variant” is making everyone sick and killing a lot of people.
At present, the actual death rate of this alleged variant, is a measly 0.08% — Another version of nothing more than a nasty flu.
Folks, this is it: The big power grab.
The feds are actually going to try this.
I am telling you now so you can take inventory of the food, medicine, and supplies you have, in order to be prepared for whatever these psychotic control-freak government peons try to implement.
Don’t wait because you know how this works.  Once the general public finds out, store shelves will be stripped bare.
Get what you need now before the masses start panic buying.
REMINDER:
For months, I have told readers of this web site, and listeners to my radio show that this whole COVID thing has never been about anyone’s health; it has been about CONTROL.
The control freaks in government and in society, want everyone to do AS THEY SAY. Period.
From the beginning, when the lockdowns happened, they closed Gyms, Barber shops, and beauty salons, but not liquor stores or abortion clinics. You could go to the store, but in many place, not go to church.
This whole COVID thing has been the intentional misuse of a virus that DOES get some people sick, to impose draconian societal control. Not because government cares about people getting sick (they don’t)- but rather a test to see who will simply do as they’re told, versus who will fight for their personal freedom.
The useful idiots who panicked about this COVID, fed right into the whole control scheme, reacting in fear to normal people living normal lives, who went outside without masks, and didn’t buy-in to the hype about this illness.
And they’re STILL trying more of this control nonsense, claiming there is a new, deadly “Delta” variant.  Here’s the thing: They never isolated and purified the original COVID virus. So they don’t have its genome.
As such, how can they claim there are variants when they don’t even know what makes up the original????????
In short, they can’t.
This is FRAUD on a massive scale.  It is a criminal conspiracy to defraud people of their precious liberty.
COVID: It’s not about your health, it’s about control.

I read somewhere else that there would be a worldwide lockdown starting in September.

These are crazy times, thank you for sharing this information and God bless you.

@MattNZ A couple days ago, my wife received a notification/newsfeed/something that said that the FCC/FEMA would conduct a test alert on TV and radio. FCC = yawn. Add FEMA to the mix and my antenna go up. Too many times there has been a FEMA drill/simulation and ‘something happened’. Like 9/11 for example. We’ll know soon enough because time, proves all things.

Definitely pay attention to things. I think the powers that be are going to try a massive lockdown again. Some extra food on hand would be a good idea.

So I believe an extended time of lockdowns and 7 months supply would be right for you. This is what I am hearing for you from the Lord. 🙏

Was that for me? Thanks Maria. I’ve been squirreling away dry and canned goods for a while. My wife thinks I’m a bit off my rocker but looks the other way when I come back from the store with another 5kg bag of rice.

Yes Matt that was a word from the Lord directly to you. 7 months worth for your household plus water also! We all get looks from others who roll their eyes but If you obey the Lord you will see the salvation of your household on many levels. Blessings Matt! 🙏

Maria, thanks for that, you made my day!

Without a doubt! Their house is crumbling somewhat, and they’re desperate to retain control. If the H.T. post has any credibility, plus throw the ‘test alert’ in there, the 11th is only a few days away.

The LORD has been pressing on me heavily for a while to ‘get what we need, never mind the cost, for soon it won’t be available at any cost.’ More recently, I was instructed that if it needs to be ordered, do it by mid-July to be reasonably certain it would come, after the end of July it will be a flip of the coin.

The pressure has been ramped up everywhere, very quickly. For example, the article posted here I think about Lloyd Austin making an announcement tomorrow regarding mandatory jab for all US military; not sure if that supersedes the Sept 1 date or not. Also after having said, ‘Oh no way; we’d never make it mandatory’, our illustrious emperor is now reported to be considering that. Just like France, Italy, Russia, Australia and others in certain sectors.

The good news is that a major victory just occurred in Alberta, Canada. Just watched a Stew Peters interview with Peter King re his court victory against masks, distancing, vaccines, everything. He sent sub-subpoena to minister of health for proof of isolation of Sars-Covid 19. She had nothing to back up the claim. Ha! So it is now being treated as just the flu in Alberta; no masks for children in school, no vaccines, no distancing, no quarantines, nothing.

Nevertheless, I sense from the LORD the big push is coming and coming soon. Add the pending minimal harvest for 2021 and grain shortfalls amongst the three biggest grain exporters, meat wars [just saw swine flu has arrived in the US] and absolutely yes, a backup supply based on the direction of the LORD is wise, among other things.

…also “pitched a cabin fever” makes me think of “fever pitch”: a state of intense excitement and agitation.

I do believe that Kobe Bryant was an illuminati sacrifice, just like other famous people in Sports and Hollywood Actors are sacrifices.

Interesting news connection from this week.