You are here: Home » Prophecies » “Men in this day have made themselves idols to replace Me and My presence, but My mountain is shaking.” 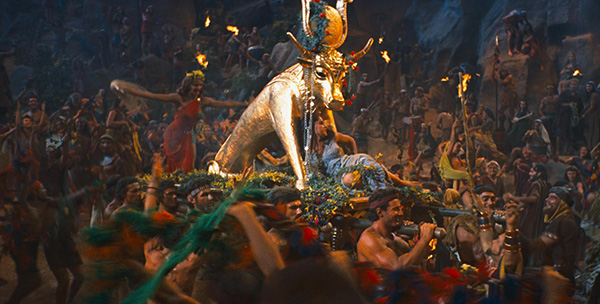 Close to 2 in the morning on March 7, 2018, the Lord spoke to me. I share this with fear knowing at the Day of Judgment, I will meet Him.

Just as Moses went to the mountain into My presence, those at the bottom of the mountain became at ease, restless, weary and worn saying, “Moses is dead, he’s not coming back.” This is the same spirit upon the people of this day.

Soon those at the bottom of the mountain made an idol they could see. Men in this day have made themselves idols to replace Me and My presence, but My mountain is shaking. For your hearts are revealed before Me and when My servant Moses came down from the mountain, he came with power and glory, finding cold hearts, with Egypt still on their minds and in their hearts. Soon, I will come from My mountain in Glory with power and great glory and yet I see cold hearts and worldly minds, mocking saying, “He’s not coming back. He has delayed His coming.”

SHAKE yourselves, WAKE UP My people for the day of the Virgins is upon you. Get the OIL back in your lamps and be ready for that hour many thought would never come upon them. For I have spoken unto My servant these words. For some have wondered and ask for a clear word. Shake your cold hearts and look to Me for the hour is late says the Lord. Shake yourself!

(I woke up to thunder, lightning and shaking in my room.)

For a split second, I saw a flash of light. This is hard for me to even say and I don’t even have the words to describe this. For a spit second, it was as if I was feeling a fear of what it was like to be in the Tribulation. It was awful, just awful. The fear I felt was indescribable.

TD Hale is Pastor of Calvary Christian Center in Gallipolis, Ohio. He has received many prophetic dreams and visions regarding the future of America, which he posts on his Facebook page.

We have made ourselves into the golden calf. YOU TUBE, SELFIES, FACEBOOK, etc and have turned into self promoting junkies that lust after the approval of men and thrive off the recognition and glory it brings us. There is no denying it, we have elevated our thrones above the Most High and judgment is all we have left without repentance. God’s patience, grace, and mercy is so great that we have a little more time to repent than we think however the time is very very short.

Recently (especially over the past 6 months) I have had less of a desire in my spirit to dig into the news, and a much greater desire to dig into fasting, prayer, scripture, & sharing the Gospel with the lost, downtrodden, & hurting. Also there is urgency to stop procrastinating by spending time on worthless things. Now is the time focus on and complete all the good works that God has assigned to you that you have not completed.

I know this is the Holy Spirit trying to redirect me because the time we have is very short. I know this sounds like a contradiction but we have very little time left but more time than we think.

Is anyone else feeling like this or is it just me?

Imagine the power of the church if she were as in love with God’s word, and Jesus instead of social media, the result would have been extreme societal changes by now. By and large our society, and Christiandom, is consumed with living impressionistic lives in order to receive more affirmation from each other or anyone, for that matter. How will the church endure the dramatic changes that are soon to manifest? Or will they? The other day, a very well known minister made a statement about him now being famous, on a Christian television program. When he said that word, the audience gasped, and I turned off my computer. The only one who has the right to tout his fame is Jesus, none other.

I really love this word. So many receive Jesus gladly but in their hearts they turn back to the world. Most are quite content living in this world pursuing worldly things. Oh that our hearts would long for the return of our Lord and long to do the work of his kingdom. Come quickly Lord Jesus for your servants have said in their hearts, my Lord delays his coming and they are mistreating their fellow servants.

The analogy between Jesus and Moses is wonderful. Just as the people of Israel found it hard to wait for Moses and moved on so is the church. We no longer look and wait for Jesus to return.

He probably means Wrath, not tribulation, but a strong word.

Wow… I believe it.

In recent days/weeks, it’s hard to count all the numerous words, visions and dreams with this very theme. Most of us on Z3 I’m assuming are already eaten up with God’s zeal, so it stands to reason that these words are needing to go out to the people…….Just like the purpose of the 5 fold…which is to instruct the many in the congregation to go out and spread what they’ve learned in church, but is any of this really happening?…..One of these days, the last warning will be issued, and then boom, pop or swish……the Bride will be gone.