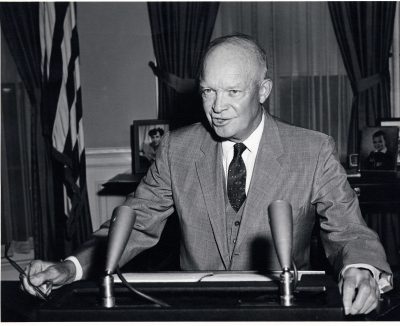 In 1956, when Senator Mike Mansfield proposed that the CIA should keep Congress informed of its activities, Eisenhower knew that the CIA would be in big trouble if Congress learned its deepest secrets. So, he decreed that Mansfield’s “bill would be passed over my dead body.” According to journalist and CIA expert Stephen Kinzer, Eisenhower then “pressed Senate leaders to do whatever necessary to ensure that it did not pass.” It didn’t.

During the initial stages of the Cold War, the Western nations—those aligned with the United States — confronted the Eastern bloc —those aligned with the USSR. The mostly non-aligned nations of what came to be known as the Third World were left pretty much alone as long as they kept the Communists sufficiently in check: a tolerance that was known as the “Jakarta Axiom” after its Indonesian paradigm.

In 1953, that policy changed. Washington decided that merely keeping Communism in check was no longer a credential for tolerance. Third World countries had to specifically align with the United States. In The Jakarta Method, Vincent Blevins explains that “the new rule…was that neutral governments were potential enemies, and Washington could decide if and when an independent Third World nation was insufficiently anticommunist.” With that, the age of the CIA coup began. It was Eisenhower who made that decision.

The first country to be tried and condemned under the Eisenhower doctrine was Iran: a decision whose reverberations are still being felt today. But Iran’s first democratically elected prime minister, Mohammad Mosaddeq, didn’t fall because he was Communist. While British and American officials publicly played up the Communist threat, according to Ervand Abrahamian, a leading expert on the 1953 coup d’etat, privately, they knew better. The American State Department and the British Foreign Office agreed that there was “no element of Russian incitation” and that Iran should “not be seen primarily as part of the immediate short-term ‘cold war’ problem.” The CIA assessed that Mosaddeq’s government “has the capability to take effective repressive action to check … Tudeh [the Communist Party] agitations….The Tudeh will not be able to gain control of the government.”

The problem in Iran was not communism, but neutralism and nationalism. In 1951, Mosaddeq was carried into power on a wave of nationalism that had made up its mind to rescue Iran’s oil from Britain so that the people of Iran, and not the stockholders of the British-owned Anglo-Iranian Oil Company, could benefit from its profits. Mosaddeq immediately moved to nationalize Iran’s oil, and, in April 1951, the Iranian parliament approved the nationalization bill. Mosaddeq was elected prime minister and signed the bill into law the following month.

That was too much for the British. They clamped a crushing embargo on Iran and sent warships to enforce it. Not enough to pressure the people of Iran to overthrow the popular Mosaddeq — the State Department placed his support at 95-98 percent — the British tried instead. But they failed. And when Mosaddeq responded by shuttering the British embassy in Tehran and expelling its diplomats, Britain’s spies were flushed out with them. England had no one left in Iran to overthrow Mosaddeq.

So, they looked to America. Though President Truman had considered ousting Mosaddeq, according to Abrahamian, it didn’t ultimately happen until the Eisenhower administration.

On July 11, 1953, Eisenhower gave presidential approval for Operation Ajax, the very first CIA coup, and Mosaddeq was removed from power. That coup would start a historical tidal wave that led to the suffering of the people of Iran under the dictatorship of the Shah, the 1979 Iranian revolution, and the American Embassy hostage-taking before crashing on the shores of today and the current standoff over the 2015 JCPOA nuclear agreement.

Not only across the sea, but in America’s backyard, some of today’s troubles trace back to Eisenhower. As Eisenhower delivered the first CIA coup in Iran, so he delivered the first CIA coups in Latin America. And as seen in Cuba, Venezuela, Bolivia, Haiti and other Latin American and Caribbean Basin countries, the effects of that foreign policy orientation are still being felt today.

Like Mosaddeq in Iran, Jacobo Arbenz of Guatemala wanted his own people to benefit from their own country’s wealth. He took on United Fruit, which owned about 20 percent of the land in his country and redistributed it. He also regulated major U.S. companies in Guatemala. In 1954, Eisenhower ordered the CIA to overthrow Arbenz, and, in late June that year, it succeeded.

The Latin American or Caribbean country most in the news today is Cuba. Hostile U.S. policy toward Cuba is usually traced back to the Kennedy administration. But in all of the three most important ways, those policies were born during the Eisenhower years.

The U.S. embargo on Cuba went into full lockdown by order of Kennedy in February 1962. But the doors began to close already in September 1960 when Eisenhower banned all exports to Cuba except food and medicine. So, the embargo, the lingering heart of the bad relationship, traces back to Eisenhower.

So does the Bay of Pigs. Though, again, usually attributed to Kennedy, it was in May 1960 that Eisenhower approved a covert action on Castro. By October 1959, Eisenhower had “approved measures,” according to CIA expert John Prados, that led to “a secret war.” It was Eisenhower, and not Kennedy, who authorized the plan for the invasion of Cuba that would mature into The Bay of Pigs. “There can be no doubt the revised CIA plan amounted to an invasion,” according to Prados. “Dwight D. Eisenhower, not John F. Kennedy, holds the responsibility there.” The CIA plan to invade Cuba is dated December 6, 1960. Kennedy would be inaugurated forty-five days later.

Like the embargo and the Bay of Pigs, the original signature on the plan to assassinate Castro is, not Kennedy’s, but Eisenhower’s. In the summer of 1959, William LeoGrande and Peter Kornblum explain in their book, Back Channel to Cuba, “key officials in the Eisenhower administration reached….a clear determination to bring about Castro’s demise.” The decision was cast for regime change in Cuba before Eisenhower left office. By October, secret, but official, U.S. policy was to overthrow Castro by the end of 1960. On November 5, according to LeoGrande and Kornblum, that plan was approved by Eisenhower. On December 11, 1959, according to CIA expert Tim Weiner, Allen Dulles, Eisenhower’s CIA director, gave the go-ahead for Castro’s “elimination.” Dulles changed “elimination” to “removal from Cuba.” Stephen Kinzer reports that on May 13, 1960, after being briefed by Dulles, Eisenhower ordered Castro “sawed off.”

These actions of Eisenhower sowed the seeds for the embargo and regime change policies that still bedevil U.S. relations with Cuba today.

While Eisenhower did pull in the reigns on American military intervention in other countries, he also built up and gave free rein to covert CIA operations — there would be 170 of them during his two terms — that intervened in other countries and that resonate 61 years after he delivered his famous farewell address and his warning about the potential excesses of the military industrial complex.