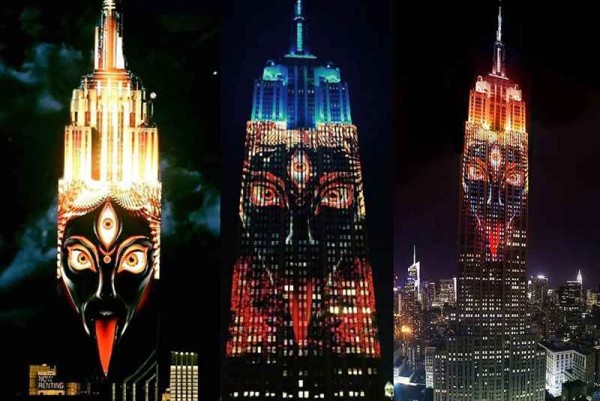 On August 8, 2015 the Goddess Kali, Hindu god of death and destruction was projected on the Empire State Building in New York City as shown in this photo.

The Times of India reported that “In a breathtaking spectacle, Goddess Kali was projected on the Empire State Building in New York.”

Some might ask, “Who is Goddess Kali?” Goddess Kali is the Hindu god of death and  destruction. The name of Kali means black, time, death, lord of death; she is therefore called the Goddess of Time, Change, Power, and Destruction. She is known as the “Black One”, or the “Dark One”.

My heart is very heavy for NYC. I am in prayer for 5-6 hours each day. Last week my associate and I were led to go to Manhattan to intercede. We spent half a day praying for all New York. Ruach HaKodesh spoke about His verdict for NYC: JUDGMENT.

Please pray for my congregation and my leadership. We are commanded by Elohim of Yisrael to set up a “white hospital” for the survivors of the calamity. We are  looking for a new building for our ministry. Please support us in prayer and financially. The task is enormous. The time is short. The message is urgent.

Rabbi Hadassah Ryklin is a Jewish believer in Yeshua the Messiah and Rabbi of the Messianic Temple Beth El in Brooklyn, New York, USA. She has received many prophetic words and warnings for America, which she shares on her website www.messianictemple.org. Messianic Temple Beth El is a multicultural Spirit-filled end-time Messianic synagogue proclaiming Yeshua from Natzeret, the prophesied Messiah of Israel.

Rabbi Ryklin ministers personal one-on-one deliverance sessions to those seeking freedom from demonic oppression. She also trains a special intercessory group, “Warriors for Israel”, who do territorial and global warfare.

She proclaims the Revival of Repentance in the Name of Yeshua HaMashiach to the Jew first and also to the nations. Her primary goal is to establish a Messianic Nation from the remnant of the twelve tribes of Israel and to make aliyah to Eretz Yisrael, the Land of Israel. Her YouTube channel is the same as her name – Rabbi Hadassah Ryklin.

THIS IS A CONTINUATION TO THE EMAIL I JUST POSTED TO YOU. IT IS MY SON DAVID’S INTERPRETATION HE SENT ME. HE LIVES IN FLORIDA AND WORKS FOR AMERICAN AIRLINES. I THINK IT IS A WONDERFUL INTERPRETATION. Mary Mom’s dream Genesis 40:8 Interpreting dreams is God’s business, Joseph replied. “Go ahead & tell me your dreams. This is my thoughts on this dream. As I am learning Gods ways. The first dream of the dilapidated house is my mom’s 81 year old body. Having survived 3 different bouts with cancer, it is reaching its end. The bedroom is the last room in the house (body) that hasn’t fell apart. Bob is a symbol of the intimacy & relationship mom has with the spirit of the Lord. Each of us as believers should have this marriage to the one who lives within (hebrew”yada”). Her statement to Bob “shouldn’t we get another place to stay, as this place is falling apart”, further illustrates the body (house) is falling apart and it’s coming time to replace it. The 2nd dream “Bob has to escort someone to a far off country”. He had both a letter & a check of $111,000 to be given to a person or persons”. This speaks of the spirit of the Lord that has to escort mom to a far off place. The “letter”, represents the word of God (being ministered to the persons) The 111 is Gods number, illustrated 3 times. Once for each dream. He was been with her in her past life, he will be with her in the upcoming ministry & he will be there in the future at the end of her days. My take is there is another missions trip instore for mom. Ministering the riches of the kingdom to the these persons,… Read more »

Dear Friends: I am an 82 year old sister in the Lord. I live in Alaska and have spent over 30 years in missionary work all over our world. I am forwarding you an email concerning a dream I had recently that is very relevant to the “11” warnings being posted worldwide. Perhaps you will find them interesting. Mary E. Adams Strange Dreams Last evening, I spent some time reading a good spiritual book (Bevington’s) before I fell asleep. Around midnight, I had a very strange dream. In this dream, I was staying in a rather dilapidated old house. My husband Bob (now deceased) was there. There were several rooms that were leaking and tilted, as if they had suffered from an earthquake, but my bedroom was okay. In the dream, I was asleep on my bed and it was dark. But suddenly I saw Bob at a desk in front of me with his back turned. In the dream the light went on and he came over to the bed and sat beside me, taking my hand and putting his arm around me. I felt that perhaps we would be making love shortly as we used to do when he was alive. But of course, nothing like that happened. I then began to ask him if we shouldn’t get another place to stay, as this house was falling apart. He didn’t say anything, but suddenly returned to his desk and turned his back to me again. It was so real, I awoke and found myself calling his name out loud, “Bob!” The bedroom was dark, so I switched on the light—but he was not there. It was very frightening. I got up and went through the house, checked the doors to see if they were locked, went to the… Read more »

Sister Rabbi Hadassah, I just saw this image in movement with sound. It made me feel sick. The still shot on your article was horrible, but the moving one is over the top with the sound, too. I am led by the Lord to do what I call prayer mapping: North, south, east, and west areas tied to high towers, high towers and the masonic mysteries and so on. Of course, NYC is the highest in our nation, a stronghold. I am praying that what the Lord has given to you to do, that he will also raise up those that can assist you, but I know that it is a road to be paved in prayer. I don’t know if I wrote that your name Hadassah, which means myrtle, always speaks to me as hospital and healing, from the Hadassah Hospital in Israel. Shalom

Sister Rabbi Hadassah, Yes, I am moved to prayer. Your request and the urging in the Lord, even this morning. I will set a time of fasting on your behalf and that of NYC where you minister. But to be sure, dear sister, we are not arguing, we are being sharpened. May we then set our chin as a flint and intercede, NOW! Yes, the earnest prayers…

Shalom to you all and thank you for your comments. CAN YOU PRAY? CAN YOU INTERCEDE? CAN WE JUST STOP ARGUING AND START BOMBARDING THE THRONE OF ELOHIM?!!! You all can only talk about it, we, in NYC, will live it. I am asking for your prayers and thank you in advance. The time is short. The message is urgent, but so few are responding. Remember Yaakov/James 5:16, “Confess your trespasses to one another, and PRAY FOR ONE ANOTHER, so that YOU are HEALED. The earnest prayer of a RIGHTEOUS one accomplishes much.” My congregation and I are praying and fasting seeking the face of our Abba. Yes, He has a plan, an awesome one, but it is up to you to find out about it. WE NEED YOUR PRAYERS!!!

Shalom Rabbi Hadassah, I am the same Dianne from Charisma that you have been conversing with. I would like for you to please explain to me what a ” white hospital” is. Thanks for replying and God bless.

0n our knees! and our needs will be met in due season.

Jeff, yes, the nation did not take heed of the many warnings we have been given, thus far. I have heard many say we should do this, or that…but getting on our needs is a must. When I heard the ‘I love you” statement in the dream, I knew that is was for NYC, as I was looking at it in the dream. Both of them. We don’t have our tomorrows, yet, but we have our today, and today is the acceptable day of the Lord, and in this day, in our own lives we can rejoice because we live, and breathe and have our being in Him.

BTW There are multiple examples where God instructed His people to leave a city/country before He destroyed it…… He did not tell them to pray for the inhabitants. He actually told them to not even give them thought (ask Lot’s wife about that)……. Jesus said, if a certain town does not except you, wipe the sand off your feet and continue on. In other words, don’t waste your spiritual energy God has given you. Be wise.

Sandra and Karen describe the 2 roads being traveled (in the US). They are ever so apart now. The distinction is apparent to those awake…………… Speaking of 9/11, both forces were at work. We had an initial wake up where everyone stood together. But they were really not united with eyes single to God. More like everyone hovering together because everyone was lost and didn’t know which way to turn…….. The other side of the 9/11 story is we lost our freedom because of fear. Our Constitution was torn apart…….. All because even in that hour of need WE CHOSE MEN to lead us instead of God……….. That is why I continue to say this country is history. God’s patience is over and judgement is here…… Waste not your energy praying for this country, but pray for God’s children. This is not 1996. It is 2015, time is up and worshipping God should be at the top of the list……. When we worship God we are opening up to God’s will.