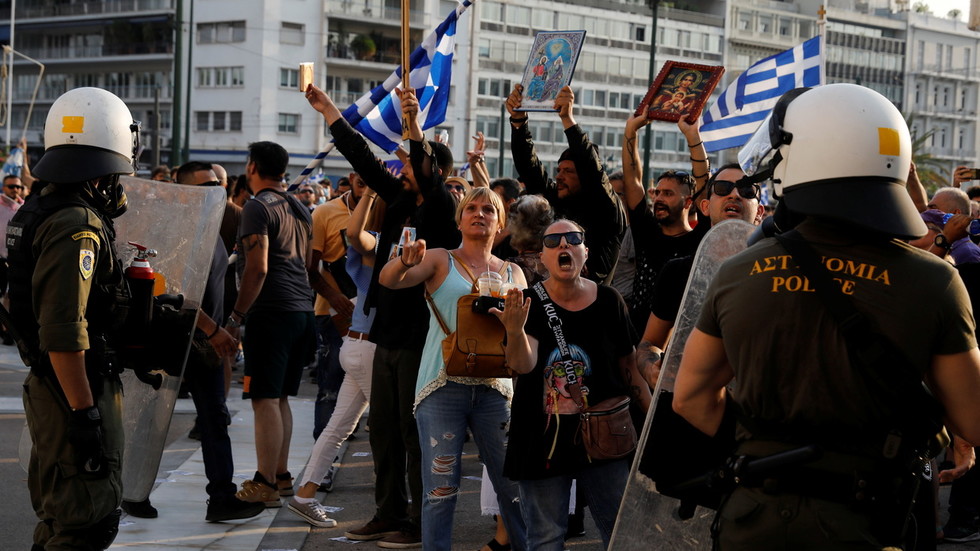 Police in Athens have broken up a protest outside the Greek parliament, using tear gas and water cannon to scatter the demonstrators. The protest was a response to the government’s announcement of compulsory vaccination for some.

A crowd of more than 3,500 protesters gathered in Syntagma Square, outside the Hellenic Parliament in Athens on Wednesday. After being asked to leave, some of the protesters threw bottles and other projectiles at police officers, Greek news outlet Kathimerini reported.

#BREAKING⚠️❗The tense situation this evening in front of the Greek Parliament in Athens. The police are using water cannon and tear gas to disperse a demonstration against the vaccination pass 🇬🇷. #Greece#Athens – Sputnik pic.twitter.com/c9NKBcuqej

Some of the protesters wore religious clothing and clutched icons, while others waved flags and handed out leaflets for right-wing political movements, according to another report from Kathimerini. Clashes were also reported outside the University of Athens, and in the northern city of Thessaloniki.

Similar protests broke out last week after Greece’s government ordered the mandatory Covid vaccination of healthcare workers and nursing-home staff. Those who refuse the jabs can have their pay withheld, and the government has not ruled out extending the requirement to other workers in the fall.

Greece is not the only country to mandate that some of its population get vaccinated against the coronavirus. France and Italy have both introduced compulsory vaccination for healthcare workers, while the UK will soon require citizens to show proof of inoculation to enter nightclubs and other crowded social spaces.

As police officers dispersed the crowd at Syntagma Square, Greece’s National Public Health Organization announced that 2,972 new cases of Covid-19 had been recorded in the preceding 24 hours, along with three deaths. Daily cases have risen substantially in Greece since early June, when most days saw less than 500. Deaths this month, meanwhile, are at their lowest levels since last year.