You are here: Home » Prophecies » God is about to expose corruption schemes and “blow the legs out from under them.” 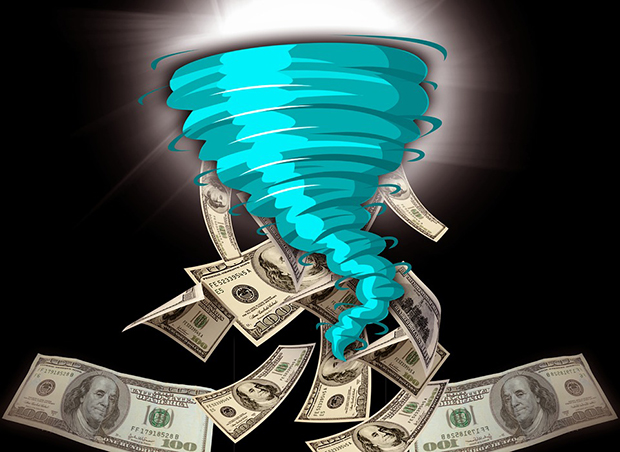 On November 2, 2017, I had a dream in which I was standing in the hallway of a building speaking to a friend. We were standing in front of a series of lockers, like high school lockers. The locker right in front of me was securely locked with a thick padlock.

Without warning, a powerful force came like a mighty, angry wind, but it did not shake nor move us. Without effort, the force blew the padlock completely off the locker. Then, the locker door was powerfully thrust open and I was shocked to find there was a man hiding in the locker. In the blink of an eye, the wind force yanked him out of the locker and blew against him with such force that it blew off his legs right from under him!!

The scene changed and I saw myself walking out of a building and standing outside in the middle of a busy downtown area of a large city. There were tall office buildings all around me.

It was a warm, clear, sunny day. I looked up and I was horrified at what I saw. At the end of the street from where I stood, I saw a massive, immensely powerful tornado making its way into the city! It was taller and wider than the skyscrapers! I saw debris flying around inside the tornado, yet the wind force was self-contained. Nothing was flying around or out of place in the city. It wasn’t even windy! The tornado did not destroy anything in its path, but it seemed to embody a personality. It appeared as if it were an angry “strong man” on a mission, making his way towards his intended target!

Interpretation:
This dream is great news! The Lord is going to expose things that have been “securely” hidden for years and he is about to “blow the legs out from under” corruption schemes so that they will no longer have traction. We are already seeing this taking place, but I believe the party is just getting started. Our God is a mighty force. We have nothing to fear, but the workers of unrighteousness have much to fear.

Mindy Negron lives and works in the Chicago area. She received a word of correction from God in May 2016, which has helped her to be a bolder witness, speaking up when she has opportunities to share her faith.

31 sealed indictments in northern Virginia courts. Tony and John Podesta and many others.

I agree Mindy, the Lord has been dealing with me about one main pressing issue this year, and that is “Exposure.” Many of this nations darkest secrets are fixing to be exposed. I also believe in the next 7-10 years much ancient biblical knowledge (knowledge the illuminati, masons, kept back) and God Himself will allow it to be released, in these last days, because it’s the appointed time for its release.

Mindy: Your prophesy is true

What great news Mindy. Bless you.

This was recorded in 2016 a Pharmacist not a Prophet
https://youtu.be/I_ljni6ZhZk

It was 17 sealed indictments in Washington DC, it’s now 31. Heads are about to roll. And President Donald Trump has played the Obama-Clinton crime cartel like a fiddle. You are about to witness something that was deemed to be an impossibility just one year ago.