You are here: Home » News » Political News » God Causing Schemes Against Trump to Fail and Backfire. 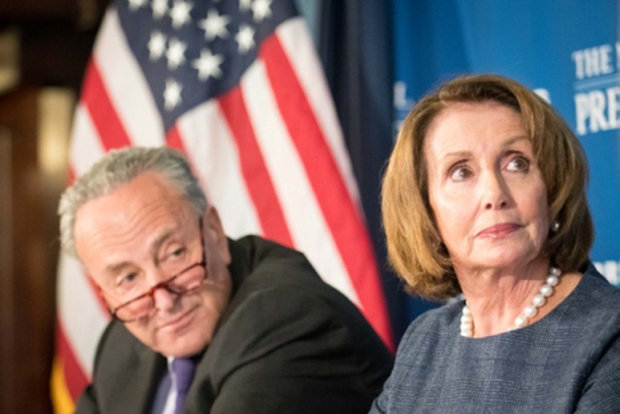 God is moving in behalf of our nation in amazing ways, protecting President Trump and foiling the schemes against him.

In the ten-minute video shown below, Pastor Paul Begley shares two prophetic insights received by an unnamed friend of his ministry, both revealing how God is causing schemes to stop President Trump to fail and even turning the schemes around, resulting in severe consequences for those who seek his demise.

The first dream was received five years ago, but was not shared until March 2017 because he wanted to make sure it came to pass before he shared it.

In the dream, he saw President Obama sitting in Richard Nixon’s house in California. There were a lot of people there talking and moving around. The man who received the dream was also there with them.

Then some officials came in and handed Obama a sheet of paper, which he began reading. As he was reading, his eyes got real big, like he was stunned by the information he was reading. Seeing how distraught he was, this man (who received the dream) walked over to him hoping to pray for him, but the Holy Spirit stopped him and said, “No, do not lay hands on him. Do not pray for him.”

At that moment, President Obama jumped up and ran out of the house. As he was running, he began to turn into some type of a creature, some sort of a beast of some sort. He was not sure what it was. He had never seen anything like this before.

President Richard Nixon was guilty of wire-tapping the opposition party’s candidate, just like Obama was caught doing to Trump earlier this year. Although both Presidents were caught committing the same crime, President Nixon was forced to resign, while President Obama amazingly had no consequences, which is just one example of the many free passes given to Obama despite his many crimes, fulfilling of Daniel’s prophecy that the antichrist will “prosper and perform his will.” (Daniel 8:24)

For a while, Obama might appear to have gotten away with his crimes, but he will ultimately suffer the most severe consequences imaginable. When he ran out of the house, he was transformed into a beast, which reveals the time we are in now. He has departed from his role as President, and has been perplexed by his inability to stop President Trump. He is now descending to another level of darkness, transforming from a man into a demon possessed beast who will arise out of the sea to receive his authority from the dragon (Revelation 13:1-2).

Pastor Begley shared that dream to demonstrate the accuracy of this man’s prophetic dreams because he received another dream on January 9 2017 regarding a plot to destroy President Trump, which he shared with Pastor Begley in the following email message:

“President elect Trump, a scheme has already been hatched to try and impeach you within the first two years of your presidency, before you have even taken office. Even many in the Republican Party will fall for it, but it shall not prevail, says the Lord of the earth.

Chuck Schumer and Nancy Pelosi are the architects of this plan, and both will lose their seats and Pelosi might even go to jail.

On another note, many are worried about Trumps safety, but the Lord says, ‘I will be by his side the entire time and I will take him home in my time.'”

This is a great confirmation of how God is with President Trump, enabling him to overcome the most overwhelming odds to complete the assignment God has for him. Just like we saw during the 2016 election, those who opposed Trump suffered severe consequences. Politicians who tried to defeat him saw their own campaigns suffer defeat.

There are many Congressmen who need to lose their seats, but Chuck Schumer and Nancy Pelosi are at the top of the list. They are enemies of our country, harlots, and pathological liars. Apparently they don’t know when to stop because they are now crossing a line by crafting this scheme to impeach Trump. According to this prophetic word, God will cause it to backfire on them, resulting in their removal from office. Nancy Pelosi might go to jail, which would be a day to celebrate.

The prophecy revealed many in the Republican party will support the scheme to impeach Trump. That is believable since so many of them are just as guilty of betraying the American people as the Democrats. However, it is bad news for them because it means God will deal with them like he will with Schumer and Pelosi.

The prophetic word revealed God will protect Trump and no man will choose the time of Trump’s death. That timing is in God’s hands. That is great news!

Psalm 7:15-16 AMP – He has dug a pit and hollowed it out,
And has fallen into the [very] pit which he made [as a trap]. His mischief will return on his own head, And his violence will come down on the top of his head [like loose dirt].

Proverbs 26:27 AMP – Whoever digs a pit [for another man’s feet] will fall into it,
And he who rolls a stone [up a hill to do mischief], it will come back on him.

S.Peter, those are great verses on which we can base our prayers for those who are trying to do evil to President Trump and US. Blessings,
Corrine

Exodus 32:1: Now when the people saw that Moses delayed coming down from the mountain, they gathered together before Aaron and said to him, “Come, make us a god who will go before us; as for this Moses, the man who brought us up from the land of Egypt, we do not know what has become of him.” This obsession that a certain part of the body of Christ has with President Trump is concerning. Remember Jesus? Isaiah 9:6: “……. And His name shall be called Wonderful, Counselor, The Mighty God, The Everlasting Father, The Prince of Peace.” The function of the body of Christ is not to make America great again – empires fall and America is overdue. But if by chance, America becomes great again, we have only God to thank for that – not whomever He may use to accomplish it – the vessel is not greater than the one who uses it. Jesus is coming again for a church “without spot or wrinkle” Ephesians 5:27 – but until He returns: 2 Corinthians 5:20 (Amplified): “So we are ambassadors for Christ, as though God were making His appeal through us; we [as Christ’s representatives] plead with you on behalf of Christ to be reconciled to God.“ Colossians 3:2-4 (Amplified): Set your mind and keep focused habitually on the things above [the heavenly things], not on things that are on the earth [which have only temporal value]. 3 For you died [to this world], and your [new, real] life is hidden with Christ in God. 4 When Christ, who is our life appears, then you also will appear with Him in glory.

Thanks for catching that David. I updated the post to correct my mistake. I knew Nixon did not go to a regular prison, but thought after leaving the White House was temporarily confined to his home in San Clemente CA. In any case, my point was Nixon suffered severe consequences for his crimes, being removed from office, while Obama suffered no consequences, at least not yet.

Gerald Ford was rewarded with the Presidency by the Deep State for participating in the coverup of the JFK assassination on the Warren Commission which was convened by JFK conspirator, President LBJ. Similarly, Dallas CIA Chief and later CIA Director George H. W. Bush was also rewarded with the Presidency for actively participating in the plot to assassinate JFK. Nixon was in Dallas on November 22nd, 1963, and gave a speech at Pepsi. He likely had a hand in the plot as well because he too was rewarded with the Presidency shortly thereafter as well. Watergate was really about eliminating damning evidence of Nixon’s and Bush’s involvement in the plot to kill JFK. The Deep State had RFK assassinated immediately after he won the California Primary, the Grand Prize that virtually assured him the Demicratic Party nomination and the Presidency in a matchup with Nixon. The Deep State knew very well that former US Attorney General RFK knew very well who was behind the assassination of his brother and that there would be hell to pay if he got in the White House.

This verse came to mind. Deuteronomy 28:7 The Lord will grant that the enemies who rise up against you will be defeated before you. They will come at you from one direction but flee from you in seven

The king’s heart is like channels of water in the hand of the Lord;
He turns it wherever He wishes. Proverbs 21:1 (First chapter that I started to memorize in the Bible). May GOD continue to protect and use President Trump. . Lorri Bakker recently said( the LORD told her) that Donald Trump is falling in love with Jesus.

Ephesians 5:11 – “Have nothing to do with the fruitless deeds of darkness, but rather expose them.”

Take away the wicked from before the king, and his throne shall be established in righteousness (Prov. 25:5).

Amen !! Absolutely in agreement with this. Never have I agreed sorry with the likes of the prophets words saying ‘Trump will turn ” without naming names. A reprieve is exactly what this is. What a slow to anger, utterly merciful Lord he is.