You are here: Home » Church » Persecution » “The next gladiator games have already begun.” 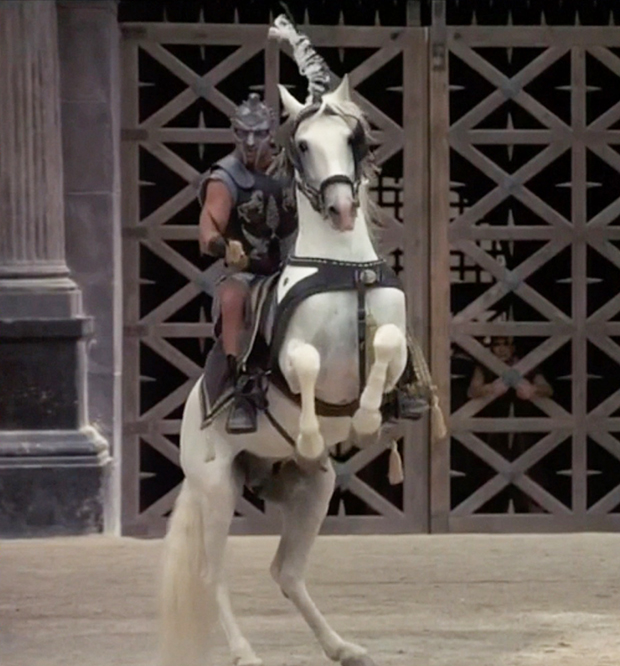 A few weeks ago, I kept being reminded of the movie Gladiator starring Russell Crowe. It is somewhat challenging for some people to watch because there is quite a bit of violence. Years ago, the Lord put it on the heart of a very dedicated minister I know to show it to his small group that met every week, using it to encourage the group that we, as Christians, have to work together to accomplish what God wants us to in these serious times, and possibly just to survive.

When this movie came to mind several times within a few days, I started seeing references on TV that reminded me of it. One reference was when the Trump White House put out a statement saying, “Hold the Line,” when they were under yet another attack recently. That was a line Russell Crowe used in the movie when they were facing their enemies and the battle was about to get really intense.

Another reference I saw that same week was a minister emphasizing that the Church must work “AS ONE”! As I pondered this and asked the Lord if there was any significance, I felt the Lord impressed on me, “The next gladiator games have already begun.”

We are seeing them now in the attacks from the ungodly immoral (even evil) individuals, especially in the MSM/Hollywood group and many in positions of power, upon the godly upright people of God, who are trying to do what is right in God’s sight.

God’s people were put on this earth for this time, and I pray the good Lord would give His people wisdom to know how to walk out the lives He created us to live in such a way that we would be a witness to many and that many souls would be saved, in Jesus’ name!!

Yes, we are in a serious war and the enemy is out to kill, steal and destroy. We are seeing evil manifested now in the flesh in all manner of violence, cursing, debasing one another, sexual sin, and hatred and many other terrible things. We need to draw close to the Lord in prayer and Scripture study and pray that we may influence as many as possible to enter His Kingdom before the door is shut.

There is nothing else that compares to the Lord. Walk in his word and desire only him.

TY, Sister Sandra. I appreciate your sharing this encouraging word for these days we find ourselves in now. Be blessed!

WOW Gustavus !!! What an incredible video !!! Everyone should watch this video !
Thanks for sharing !!

Sen. Graham asked Judge Kavanaugh in yesterday’s public hearing:To the “choices” Senator Graham is advising President Trump “to stay on track” about, this report grimly explains, is the most monumental and potentially catastrophic decision any US president may be forced to make—the imposition of total martial law.

Knowing that President Trump is being pushed by his “Deep State” enemies and the US mainstream propaganda media into the inevitability of his having to declare martial law in order to restore peace and stability to America, this report further details, Senator Graham took the extraordinary action yesterday, immediately after this New York Times hit piece was published, when he suddenly, without either context or conclusion, posed a series of questions to US Supreme Court nominee Judge Kavanaugh—whose most fearful substance of was:

Did Judge Kavanaugh know that the United States is now in a “State of War” as authorized since 18 September 2001 under the provision of the Authorization for Use of Military Force (AUMF)?

Did Judge Kavanaugh know that the United States has both a Federal and National government?

Did Judge Kavanaugh know that aside from Federal and National criminal laws, the United States now operates under “The Law Of Armed Conflict” (also known as “Law Of War”)?

Did Judge Kavanaugh know the significance of the US Supreme Court decision “Johnson v. Eisentrager” that says the US Constitution does not confer a right of personal security or an immunity from military trial and punishment upon an alien enemy engaged in the hostile service of a government at war with the United States?

Relationships in the Eastern Mediterranean are changing quickly as the US cozies up to Greece, Cypress and Albania and away from Turkey. At the same time Russia just met with Turkey and Iran. It’s all about Big Oil and there is also talk about Trump’s life being in danger if he opposes military action in Syria, reports Zero Hedge and Socha Faal: https://www.zerohedge.com/news/2018-09-08/new-alliance-emerges-eastern-mediterranean-reshape-regional-security-landscape This explains the anti-Russian narrative in the American establishment press and the war in Syria. But Americans are kept in the dark as sabers rattle in Idlib.

Turkey’s military is larger than Germany’s, Britain’s and France’s combined. Turkey’s President Erdogan has been meeting with Iran and Russia. Russia has 25 warships and 25 fighter jets war games off of Syria. Iran has been establishing bases in Syria. Israel has made hundreds of attacks on Syrian targets. Zero Hedge reports Russia has threatened the American air base on the Syrian-Iraq border with an attack if we do another false flag gas attack on the Syrian people. All this, which could easily result in WW III, is ignored by the MSM not to mention that it’s root cause is American-GB Big Oil and the petro-dollar. Erdogan is thought by many to be a prime candidate for the Assyrian, Little Horn, the Beast known as the Anti-Christ. Meanwhile, Trump will be unveiling his ME Peace Plan on the 25th. Is this the perfect storm? And, oh yes, the POTUS just declared September 2018 to be the Month of Preparedness. In the old days there was a group called the Boy Scouts whose motto was Be Prepared. That was when America was a Christian country.

Zero Hedge reports today thatTrump has reportedly done a 180 shift, departing from his prior statements of “bring our troops home” made only months ago, and has approved “an indefinite military and diplomatic effort in Syria” according to a bombshell Washington Post report.
Russia has put the US military on notice, telling American commanders that Russian and Syrian forces are prepared to attack At Tanf — a key US garrison along the Syrian-Iraq border.
A top US Syria policy representative says there’s “lots of evidence” chemical weapons are being prepared by the Syrian Army for use in its impending Idlib ground assault. https://www.zerohedge.com/news/2018-09-06/top-us-official-says-lots-evidence-assad-prepping-chemical-weapons-russia-threatens